Where in health am I? : Home / Health Cloud / Challenges / Heart / Drugs / Anticoagulants / Heparin

I knew nothing about the potential danger of blood clots, until the day they changed my life forever - Eric O'Connor, marathon runner 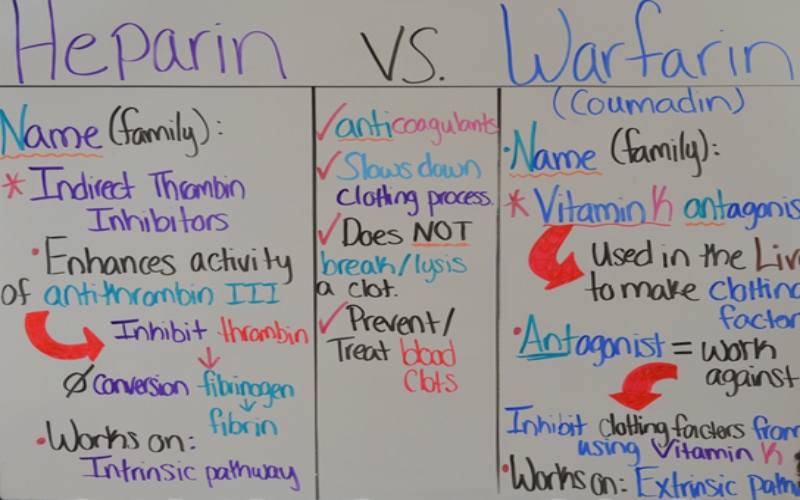 Should Bovine Heparin Reenter the US Market?

Although it was discovered in the early 1900s, unfractionated heparin (UFH) remains one of the most commonly used anticoagulants in clinical practice today.

UFH is a polysaccharide that exerts its pharmacologic activity by binding to antithrombin III (AT III) and interacting mainly with coagulation factors II and X.1 Similar agents include low-molecular-weight heparins like enoxaparin and dalteparin, which have shorter polysaccharide chains than UFH, and the pentasaccharide fondaparinux, which is a synthetic derivative of UFH that interacts only with AT III and coagulation factor X because of its lack of a long polysaccharide tail.

Heparin in STEMI and PCI – does it help?

In 2008, a contaminant eluded the quality safeguards in the pharmaceutical industry and infiltrated a large portion of the supply of the popular blood thinner heparin, sickening hundreds and killing about 100 in the US.

Is Your Medicine Vegan? Probably Not

When he learned that he would need heparin, an anticoagulant made from the intestinal mucous membranes of pigs, he asked whether he could use fondaparinux, a synthetic substitute, instead. Yes, his doctor told him, the substitution was technically possible — but it would also increase the risk of hemorrhage.

Moving closer to producing heparin in the lab

Researchers moved one step closer to the ability to make heparin in cultured cells. Heparin is a potent anti-coagulant and the most prescribed drug in hospitals, yet cell-culture-based production of heparin is currently not possible. Heparin is now produced by extracting the drug from pig intestines, which is a concern for safety, sustainability, and security reasons.

No More Heparin for NSTEMI?

Heparin is one of the oldest biological medicines, and has an established place in the prevention and treatment of venous thrombosis. Low-molecular-weight heparins (LMWH) have been developed by several manufacturers and have advantages in terms of pharmacokinetics and convenience of administration. They have been shown to be at least as effective and safe as unfractionated heparin and have replaced the latter in many indications.

Patients who experienced a certain type of heart attack who received the anticoagulant fondaparinux had a lower risk of major bleeding events and death both in the hospital and after six months compared to patients who received low-molecular-weight heparin (LMWH), although both groups had similar rates of subsequent heart attack or stroke, according to a new study.

The authors conclude that their trial “suggests that the use of heparin, rather than bivalirudin confers significant advantage in the avoidance of major adverse events. This finding might provide an opportunity, rare in modern health care, to provide improved outcomes at much reduced cost.

Dialysis and Heparin: What’s the Evidence?

Many patients suffer bleeding complications while on hemodialysis (HD). Although these events may be as clinically benign as prolonged bleeding after removal of the dialysis needles, they still have a significant impact on a patient who may miss their bus ride home as they sit that extra half hour waiting to clot. On the other hand, the bleeding can be life-threatening such as a cerebral hemorrhage. Heparin is regularly used during dialysis to prevent clotting and allow for efficient dialysis.

Between bed rest (aka "lazy lump of Kerri), pregnancy (aka "growing awesome baby"), and Factor V (aka "blargh"), I'm at an increased risk of throwing a clot, so precautionary measures are being taken. Namely: compression boots and Heparin shots.

Heparin Does Not Reduce Pregnancy Complications, and May Create Some

A commonly used blood thinner does not appear to lower the risk of blood clots or miscarriage during pregnancy.

Any patient who receives heparin can develop HIT. HIT occurs in about 2-3% of people who are treated with heparin and in less than 1% of people who are treated with low molecular-weight heparin (LMWH). The LMWH drugs that are available in the United States include dalteparin (Fragmin®), enoxaparin (Lovenox®), and tinzaparin (Innohep®). HIT is more likely to occur with use of higher doses of heparin, but HIT can also be caused by very small heparin doses, including the amount used to flush intravenous catheters.

This little syringe of burning love, is what helped women who have had recurrent miscarriages deliver full therm and those who have implantation problems (ME!) finally get a bun in the oven.

The use of heparin for noninvasive management of non-ST elevation MI (NSTEMI) is one of the most deeply entrenched myths of modern medicine. Although heparin reduces reinfarction, when it is discontinued there is a rebound in infarction rates. Ultimately, short-term treatment with heparin delays reinfarction without having any sustained benefit. Clinical trials which fail to follow patients after discontinuation of anticoagulation incorrectly conclude that heparin is beneficial.

Slimy Pig Intestines Are Not the Best Source of Heparin

The drug is often made from the slimy inner linings of pig intestines, and scientists have found a much safer way to produce it. At the American Chemical Society Meeting, which began in Philadelphia today, Robert Linhardt explained that he can make a dose from one liter of fermented bacteria broth.

The story of a deadly, contaminated blood thinner has laid bare serious deficiencies in the regulatory oversight of drugs imported from China and other developing countries. Congress is rightly determined to plug holes in Food and Drug Administration procedures that leave the American public vulnerable to toxic imports. But that is only half of the problem. It also must ensure that American companies, eager to cut costs by outsourcing, are especially diligent about monitoring their suppliers.

Heparin, grad students, a clinical revolution and giving credit where it's due

The story of a grad student who overcame remarkable odds only to be denied his moment of glory, or a tale of dark deceit and devilish doings? The story of heparin is as complicated as the chemistry itself

Indirect thrombin inhibitor that acts as a co-factor for the antithrombin-protease reaction...

Should Bovine Heparin Reenter the US Market?

Heparin was first discovered in dog livers but later produced from bovine lungs, livers, and intestines in the 1930s. In the 1940s, porcine heparin from intestines was introduced to the market, where it remained alongside intestinal bovine heparin for the next 50 years.2 It wasn’t until the late 1990s that bovine heparin was withdrawn from the US market...

Heparins: Clinical Use and Laboratory Monitoring

Heparin has long been used as an anti-thrombotic to treat and prevent thromboembolic events, as well as for systemic anti-coagulation during cardiopulmonary bypass and dialysis. Heparin continues to have distinct advantages when intense anti-coagulation is needed, but newer low molecular weight derivatives of heparin (LMWH) have advantages in the management of thromboembolism.

Heparin is a widely used injectable anticoagulant (stops the formation of blood clots). The blood coagulation system is composed of various steps and heparin acts at multiple sites in this process. Heparin prevents blood clots by blocking the action of two of the 12 clot-promoting proteins in blood (factors X and II) whose action is necessary for blood to clot.

The heparins: all a nephrologist should know

For decades, the use of unfractionated heparin (UFH) has been the basic principle of anticoagulation in patients at risk of or with established thromboembolic disorders. Nowadays, low molecular weight heparins (LMWHs) are increasingly used in this setting, because they are as effective but more convenient than UFH. The advantages of LMWHs include a longer elimination half-life, a lower incidence of heparin-induced thrombocytopenia type II (HIT-II), a lower risk of osteopenia and a more predictable anticoagulant effect that reduces the need for routine laboratory monitoring.