Where in health am I? : Home / Health Cloud / Challenges / Diabetes / Types / Prediabetes

One in four kids have either pre-diabetes or diabetes - what I like to call diabesity. How did this happen - Mark Hyman 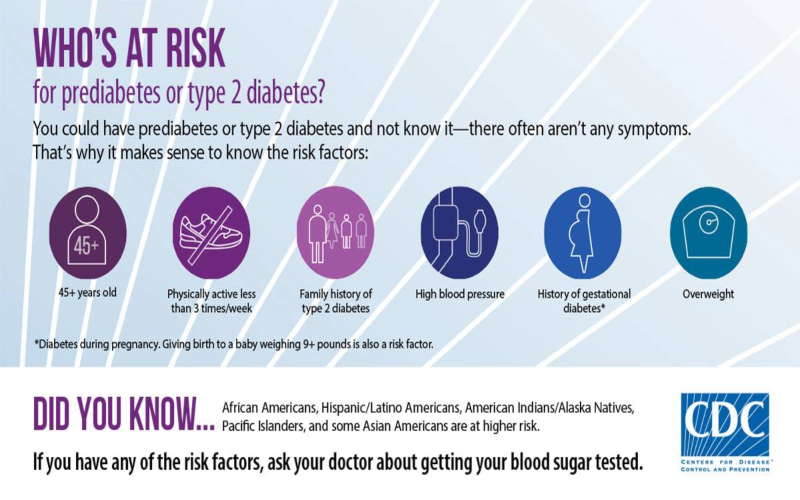 Type 2 diabetes is, in many cases, a preventable condition. Aside from those cases caused by genetics and polycystic ovary syndrome (PCOS), type 2 diabetes is usually caused at least in part by an unhealthy diet and a lack of exercise. It makes sense, then, that we would attempt to stop type 2 diabetes developing…

Developing Type 2 diabetes is a bit like getting dumped in a relationship (only much worse). Even if you are blind-sided when it occurs, it really doesn't occur overnight. Instead, you may miss the many warning signs, until your doctor tells you the bad news (about diabetes, that is, and not about your relationship).

Can Prediabetes Be Cured?

The good news, however, is that once your doctor determines that your blood sugar is high enough to be classified as prediabetes (but not high enough to be diabetes), there are plenty of preventive measures you can take to stop the onset of full diabetes. The window of opportunity to prevent or slow the progression of prediabetes to type 2 diabetes is about three to six years.

Forget the Blood of Teens. This Pill Promises to Extend Life for a Nickel a Pop

According to some sources, goat’s rue was also a centuries-old remedy for frequent urination, now known to be a telltale sign of diabetes. Today, metformin, which helps keep blood sugar levels in check without serious side effects, is typically the first-choice treatment for type 2 diabetics, and it’s sometimes prescribed for prediabetes as well.

How I Reversed My Prediabetes

Is it a simple matter of calories in, calories out? Well, no. Again there’s the tricky issue of metabolism, which slows down when you cut back on calories. That means you have to cut even more calories or you’ll plateau. You also get extremely hungry.

Pre-diabetes: can prevention come too soon?

Pre-diabetes is a classic case of an artificial diagnosis, a form of disease-mongering that is often now called “overdiagnosis”.

Why I’m worried about prediabetes

I worry that without preventive efforts like counseling about nutrition and other lifestyle choices, many people will unnecessarily make the journey from prediabetes to diabetes. And that would be a shame.

Defining pre-diabetes based on hemoglobin A1C, a common test that determines a long-term average blood sugar level, is the most accurate predictor of who will go on to develop long-term complications from diabetes, new Johns Hopkins Bloomberg School of Public Health research suggests.

Is Prediabetes An Epidemic Or A Creation Of Drug Companies?

The authors of this op-ed correctly point out that not all prediabetic patients actually progress to diabetes and that half may actually return to normal glycemia in follow-up visits. This is a good sign as prediabtetes, unlike cancer, is readily reversible.

Some doctors say the government’s effort to screen millions of people risks overdiagnosis of the condition and could cause needless fears.

Because Type 2 diabetes is a major and growing public health problem, experts certainly do want to help people avoid it. But how useful or meaningful is a test that identifies nearly every older person as likely to have prediabetes? As an accompanying editorial pointed out, it’s “a condition never heard of 10 years ago.”

A Social Network for People With Prediabetes

A Silicon Valley start-up launched an online diabetes prevention program yesterday, of the sort that has data to support its efficacy and cost-effectiveness.

Averting Diabetes Before It Takes Hold

In theory, it is possible to avert the impending health crisis. Because complications typically take 20 years to become apparent, identifying people at risk of diabetes early and taking corrective action could delay onset of the disease and its devastating consequences, perhaps for the rest of their lives.

Not everyone with prediabetes will go on to develop diabetes. Over the short term (three to five years), about 25% of people with prediabetes develop full-blown diabetes. The percentage is significantly larger over the long term. Getting the wake-up call of prediabetes can be very useful.

Most People With Pre-Diabetes Don’t Know They Have It

Most People With Pre-Diabetes Don’t Know They Have It https://www.huffingtonpost.com/2015/06/30/pre-diabetes-awareness_n_7689776.html Only about one in eight people with so-called pre-diabetes, often a precursor to full-blown disease, know they have a problem, a U.S. study found. Lacking awareness, people with the elevated blood sugar levels were also less likely to make lifestyle changes such as getting more exercise or eating less sugary food that might prevent them from ultimately becoming diabetic.

I was thoroughly unprepared for what happened next: Not only had my cholesterol levels not improved, but my doctor explained that I was now two points away from being prediabetic.

A simpler form of testing individuals with risk factors for diabetes could improve diabetes prevention efforts by substantially increasing the number of individuals who complete testing and learn whether or not they are likely to develop diabetes.

Stopping prediabetes in its tracks

A combination of obesity, inactivity and genetics is responsible. But most people with prediabetes aren’t aware they have it, and insurers may not cover testing for or treatment of the condition.

We surround you with the tools and support you need to lose weight, gain energy, and take control of your health.

With early diagnosis, prediabetes can often be reversed. By joining the National Diabetes Prevention Program (National DPP), you’ll learn how to make small changes, like altering your diet and exercising more, which can help reverse prediabetes and prevent type 2 diabetes.

Pre-diabetes (previously called Impaired Glucose Tolerance IGT) was first named in 2003 and is designed to foster attention and action in people who receive this diagnosis. It is defined as having a blood glucose level that is higher than normal, but not high enough to be classified as diabetes. The cutoff for pre-diabetes is a fasting blood sugar of 100 mg/dl. Fasting levels between 100 and 126 mg/dl are diagnosed as pre-diabetes and a fasting level of 126 mg/dl and up is diabetes.

The NaturalNews Network is a non-profit collection of public education websites covering topics that empower individuals to make positive changes in their health, environmental sensitivity, consumer choices and informed skepticism.

Sutter Health is a family of not-for-profit hospitals and physician organizations that share resources and expertise to advance health care quality.