Where in health am I? : Home / Health Cloud / Challenges / Diabetes / Management / A1C 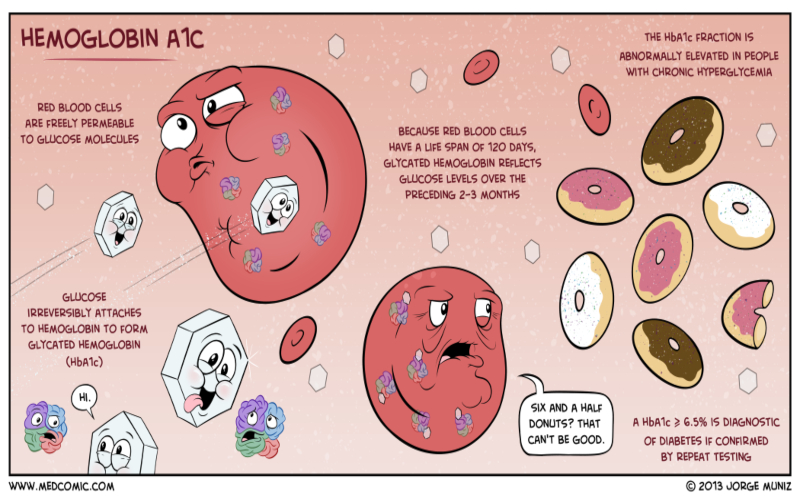 Why Hemoglobin A1c Is Not a Reliable Marker

Over the last few years doctors are increasingly relying on a test called hemoglobin A1c to screen for insulin resistance and diabetes. It’s more practical (and significantly cheaper) than post-meal glucose testing, and it’s less likely to be skewed by day-to-day changes than fasting blood glucose.

What’s the appropriate blood-sugar target for patients with Type 2 diabetes? The source of the dispute: the hemoglobin A1C test, a test that measures a patient’s average blood-sugar, or glucose, levels. Glucose attaches to hemoglobin, a protein in red blood cells that carries oxygen.

It’s been used for decades in the management of diabetes, and has been recommended by the ADA since 2010 as a testing option to diagnose diabetes and prediabetes as well.

Is A1c the Best Measure of Success?

We’ve learned over time that the A1c test is just a tool to be looked at in conjunction with other information and not a pass/fail grade to be solely relied upon.

The A1C offers a snapshot of blood sugar levels based on a three-month analysis of glycated hemoglobin, or the hemoglobin to which glucose is bound. The test is considered more accurate than daily blood sugar levels, which can vary minute by minute. But when scientists compared daily glucose monitoring to the A1C, they found discrepancies based on the age of the red blood cells, according to John Higgins, a professor of systems medicine at Harvard and a clinical pathologist. Red blood cells live an average of 45 days. But they live longer in some people, prompting this comparison by Higgins.

A widely used blood test to measure blood-sugar trends can give imprecise results, depending on a person's race and other factors. This test means diabetes can sometimes be misdiagnosed or managed poorly. Doctors have been cautioned before that results from the A1C test don't have pinpoint accuracy. A study published Tuesday underscores that shortcoming as it applies to people who carry the sickle cell trait.

A Diabetic Patient Should Know Their Hemoglobin A1c Level: Monitoring and Managing It Could Reduce Complications

A Dilemma for Diabetes Patients: How Low to Push Blood Sugar, and How to Do It?

The starting point for lowering blood sugar is diet and exercise. But for many patients, that is not sufficient. Then doctors and patients are faced with two questions: How low should blood sugar go? And what drugs should be used to lower it?

Another Diabetes Device Bites The Dust

For those new to the wacky world of diabetes, back in 2006 Bayer acquired privately held Metrika, the makers of the A1CNow. Back in the day the A1CNow was the only at home A1C test on the market and the acquisition was generally viewed as a positive step for Bayer. Yet as so often happens in the wacky world of diabetes devices great products get ruined by inept management.

It’s often viewed as the number to rule all numbers. But hemoglobin A1c (HbA1c) test results can be misleading and don’t tell the full story. As I learned in my teens, the HbA1c test shines a light on things I was trying to hide. Overall, It’s not good at getting to the details of blood sugars, but when used with other pieces of information it can draw attention to (sometimes unseen) problem areas in our diabetes management, and that’s a good thing.

Hoodwinked by the diabetes industry

Hoodwinked by the diabetes industry, we spend, as a society, tons of money treating this so-called risk factor called hemoglobin A1c, yet all that money does almost nothing to save lives or help people live longer. We should be spending healthcare dollars that purchase health.

The purpose of the NGSP is to standardize glycated hemoglobin test results so that clinical laboratory results are comparable to those reported in the Diabetes Control and Complications Trial (DCCT) where relationships to mean blood glucose and risk for vascular complications have been established.

The A1C test is based on the attachment of glucose to hemoglobin, the protein in red blood cells that carries oxygen. In the body, red blood cells are constantly forming and dying, but typically they live for about 3 months. Thus, the A1C test reflects the average of a person’s blood glucose levels over the past 3 months. The A1C test result is reported as a percentage. The higher the percentage, the higher a person’s blood glucose levels have been. A normal A1C level is below 5.7 percent.

The Pros and Cons of Diagnosing Diabetes With A1C

Glucose assessment is familiar and cheaper, but A1C seems to provide several advantages, especially in a scenario in which OGTT is rarely used and never repeated as a confirmatory testing. Perhaps accepting a double diagnostic approach in which both blood glucose and A1C do coexist as diagnostic tools is reasonable.

What Do Your A1C Test Results Really Mean?

The hemoglobin A1c test, as we all know, is supposed to give a sense of your average blood glucose levels over the past three months. But here’s a question for you: have you ever tried to figure out what those average blood glucose levels actually are? Say you have an A1c of 6.5% — what, in mg/dl, does that translate to? Try searching Google — it’s hard to find an answer.

What is Hemoglobin A1c?

It represents the percentage of glucose that binds to hemoglobin in red blood cells. Because red blood cells live for about 90 days, the test gives you a good snapshot of a patient's glucose control.

What your doctor doesn't know about glucose testing

The trouble is, a couple of factors can falsely raise or decrease hemoglobin A1c, especially in healthy people. This can confuse practitioners and patients...