Where in health am I? : Home / Health Cloud / Challenges / Infections / Viruses / Herpes Zoster

Shingles was not on my radar. Old people get shingles. Then I remembered I was old - Chuck Nyren 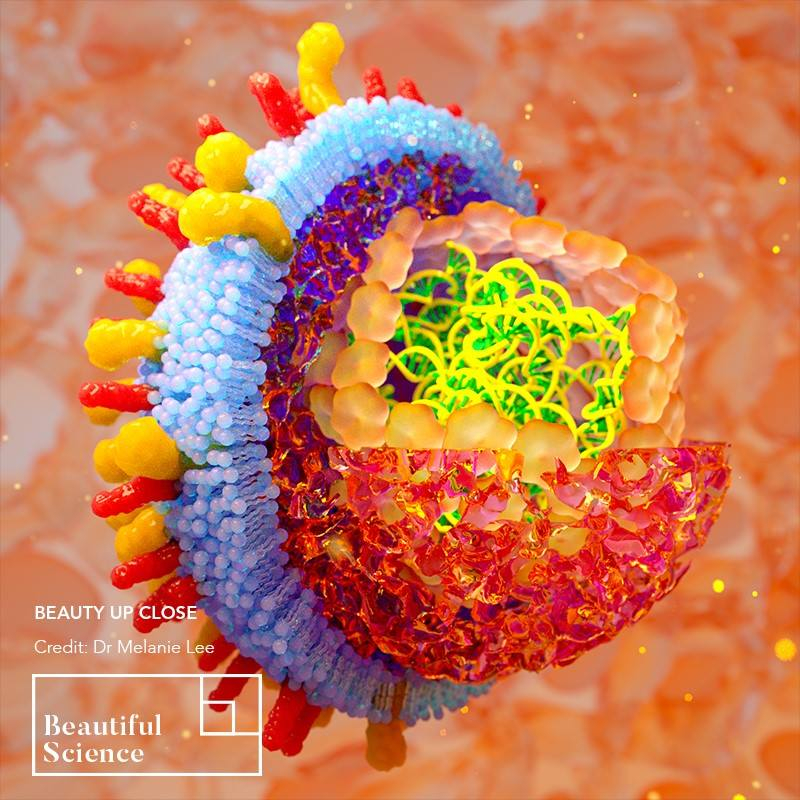 image by: Agency for Science, Technology and Research (A*STAR)

Young People Get Shingles Too

A few years ago, in my mid-30s, I broke out in a rash that stretched horizontally across my torso, from the middle of my back to the front of my ribcage. At first, I thought it might be from wearing my bra too many days in a row without washing it. Weirdly, I also felt like I was coming down with the flu. Overnight, the rash got more prominent, and my flu-like symptoms got worse, so I went to see my primary care doctor right away.

In her office, I lifted my shirt and turned. Immediately and definitively, she told me I had shingles. What? “I thought only senior citizens got shingles,” I said.

Like many adults on the south side of middle age, I had barely even heard of the…

With its burning grip, shingles can do lasting damage

When varicella zoster reawakens, it wreaks a surprising amount of havoc in the body

The blisters are contagious until they crust over, “and people should keep them covered,” said Dr. Pritish K. Tosh, an infectious disease specialist with the Mayo Clinic in Rochester, Minn.

Shingles Is Nasty, And The New Vaccine Works Well. Why Do Adults Avoid Shots?

Federal officials have recommended a vaccine against shingles that is more effective than an earlier version at protecting older adults from the painful rash. But persuading many adults to get this and other recommended shots continues to be an uphill battle, health providers say.

An Overview of Shingles

Until the prodromal period begins and the distinctive rash appears, it can be easy to mistake shingles for a garden-variety viral infection. But once the telltale vesicles begin to form on one side of the body, along with painful sensations such as burning, itching, or tingling, the diagnosis of shingles is pretty easy to make.

So are all of us with a history of chickenpox at risk for shingles? Don’t shoot the messenger, but yes.

A Pox on the CDC’s Vaccination Agenda: The Rise of Herpes Zoster (Shingles)

A new systematic review published in PLoS titled, "Herpes Zoster Risk Reduction through Exposure to Chickenpox Patients: A Systematic Multidisciplinary Review," confirms that the widespread adoption of chickenpox vaccine over the past 30 years, which has resulted in a decline in chickenpox cases associated with infection from the wild-circulating virus, has lead to a concerning increase in the incidents of herpes zoster (shingles), a far more serious expression of chickenpox virus (varicella zoster) infection.

A Pox on your Eye

Excellent review on the management of Herpes Zoster Ophthalmicus.

Shingles was not on my radar. Old people get shingles. Then I remembered I was old. I Googled shingles. I Bing-ed shingles. I Yahooed! shingles. It all fit, except it didn't hurt that much. Maybe it wasn't shingles. Five hours later, it was shingles. Multiple shooting pains. It was like having a half-dozen kidney stones.

Explainer: how do you get shingles and who should be vaccinated against it?

Advancing age is the greatest risk factor for developing shingles. As we age, our cellular immunity necessary to suppress the virus within us declines.

Studies have shown that about a third of the population will experience herpes zoster during the course of their lifetime with the incidence increasing particularly after the age of 60 years.2 Recurrent attacks are more common than previously believed, with one study finding a recurrence rate of 4% for men and 7% for women after eight years.

Painful Shingles Can Strike More Than Once

Exactly what prompts the virus to wake up is unknown, but it seems to occur when the immune system, which has kept it in check for years, becomes weakened due to age, illness or treatments such as chemotherapy. Emotional stress can cause recurrences of other herpes viruses, and the CDC is investigating whether it can spark shingles as well.

Shingles: Can Adults Protect Themselves From a Pox They Hoped to Leave to Childhood?

If you fit the criteria to benefit potentially from the shingles vaccine, I recommend you protect yourself. Get inoculated against this painful illness. Even if you don't recall your childhood chickenpox infection -- it may have been so mild you didn't recognize you had it -- reducing the potential, long-lasting complications of the disease is well worth it.

Systematic review of incidence and complications of herpes zoster: towards a global perspective

HZ is a significant global health burden that is expected to increase as the population ages. The incidence rises steeply after 50 years of age and many working-age adults and elderly individuals are at increased risk. Risk of complications, particularly debilitating and long-lasting PHN, and hospitalisation is common in the elderly population.

Why Are Shingles Cases Rising In The U.S.?

But the rise is not linked to the vaccine. "Today's adults who are getting shingles are clearly getting it from the latent chickenpox virus that they acquired as children, and not from the vaccine, which wasn't around when they were young," he said.

Young People Get Shingles Too

A smart strategy for those under 50 who want to avoid the long-term nerve pain that often accompanies shingles is to know the symptoms of the virus and see your primary care doctor immediately if you spot them. In other words, if an unexplained band-like rash breaks out next to your spine, and appears on only one side of your body, don’t wait a few months (or even a few weeks) to get it checked out.

We can answer some questions about shingles and PHN. Also, you can share tips that you have found to be helpful - help each other!

This page promotes awareness of the shingles disease which when left untreated can lead to further complications.

Shingles, also known as zoster or herpes zoster, is a painful skin rash. It is caused by varicella zoster virus (VZV), the same virus that causes chickenpox. Nearly 1 out of every 3 people in the United States will develop shingles in their lifetime. Anyone who has had chickenpox or received chickenpox vaccine in the past may develop shingles. Even children can get shingles. However, the risk of getting the disease increases as you get older. About half of all cases occur in men and women who are 60 years old or older...

Shingles is a painful blistering rash caused by reactivation of varicella zoster virus, the chickenpox virus. It is correctly known as herpes zoster. Chickenpox or varicella is the primary infection with varicella zoster virus. During this widespread infection, which usually occurs in childhood, virus is seeded to nerve cells in the spinal cord, usually of nerves that supply sensation to the skin. The virus remains in a resting phase in these nerve cells for years before it is reactivated and grows down the nerves to the skin to produce shingles (zoster). This can occur in childhood but is much more common in adults, especially the elderly.

Early signs of shingles include burning or shooting pain and tingling or itching, usually on one side of the body or face. The pain can be mild to severe. Rashes or blisters appear anywhere from one to 14 days later. If shingles appears on your face, it may affect your vision or hearing. The pain of shingles may last for weeks, months, or even years after the blisters have healed.

Confusion between Shingles and Herpes is common because the viruses have similarities such as one-sided pains before the rashes appear and blisters in circumscribed skin areas. However, the blisters of Herpes tend to be recurrent to the same spots, are of shorter durations (few days), develop in smaller areas (few blisters in an area as big as a coin), and seldom result in post herpetic neuralgias. Shingles, on the other hand, affects larger skin areas and is not recurrent to the same spots. While over a lifetime an individual may develop a maximum of three Shingles episodes, most herpes sufferers will experience numerous, recurring episodes of blistering to the very same locations.

Pain associated with shingles usually lasts for 2 to 3 weeks, but can last for months, even years. When the nerves have been damaged from shingles, postherpetic neuralgia (PHN) can occur, and the resulting pain can be mild to very severe. As people get older, they are more likely to develop PHN, and the pain is more likely to be severe.

Herpes zoster usually clears in 2 to 3 weeks and rarely returns. If the virus affects the nerves that control movement (the motor nerves), you may have temporary or permanent weakness or paralysis. Sometimes the pain in the area where the shingles occurred may last from months to years. This pain is called postherpetic neuralgia.

You cannot develop shingles unless you have had an earlier exposure to chickenpox. Shingles occurs when an unknown trigger causes the virus to become activated. Most adults who have the dormant virus in their body never get shingles.

Although any person who has had chickenpox can get shingles, most people who do so are older than 50 or have a weakened immune system. For example, a person might be susceptible if they have cancer, take medicines that weaken their immune system, or have HIV or AIDS, even if they are younger than 50.

It is safe to be around infants and young children, pregnant women, or people with weakened immune systems after you get the shingles vaccine. There is no documentation of a person getting chickenpox from someone who has received the shingles vaccine (which contains varicella zoster virus).