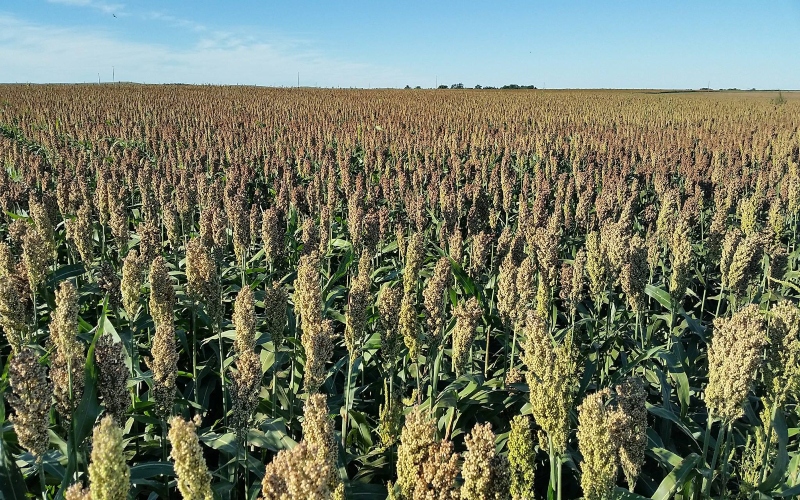 Heat, Drought Draw Farmers Back To Sorghum, The 'Camel Of Crops'

Much of the world is turning hotter and dryer these days, and it's opening new doors for a water-saving cereal that's been called "the camel of crops": sorghum. In an odd twist, this old-fashioned crop even seems to be catching on among consumers who are looking for "ancient grains" that have been relatively untouched by modern agriculture.

Sorghum isn't nearly as famous as the big three of global agriculture: corn, rice and wheat. But maybe it should be. It's a plant for tough times, and tough places.

Sorghum "originated in the northeastern quadrant of Africa," explains Gebisa Ejeta, a plant scientist from Ethiopia and professor at Purdue University. From there, it spread…

Sorghum grain can be prepared like rice, quinoa or other whole grains. You can cook sorghum using your stovetop, slow cooker, oven or rice cooker. Whole grain sorghum adds a hearty, nutty flavor to your favorite recipes.

Ever heard of sorghum? While this ingredient may be new to you, but it’s actually as old as time. Sorghum has been grown for some 8,000 years, is now one of the top five cereal crops in the world, and has been a nutritional powerhouse long before science told us so. It’s similar to wheat, but with two major differences: the seed has no hull, and it’s gluten free.

Between salads, soups, veggie dishes, and even baked goods, the uses for sorghum are endless. Here’s everything you need to know about this nutrient-rich grain (including where to buy it, store it, and how to cook it).

Dating back to 8000 B.C.E. in Egypt, sorghum (EU) is truly an ancient grain. As a dietary staple for over 500 million people, sorghum is one of the top five foods that provide 85 percent of the world’s food energy, following rice, wheat, maize and potatoes. Sorghum gets its popularity due to its ability to grow in both mild and dry climates, as well as its resistance to drought, heat and floods.

This once-uncommon grain is now surging in popularity. While more research is needed—especially clinical trials to test sorghum’s health effects in humans—preliminary findings from animal and laboratory studies suggest the compounds found in sorghum benefit health. But one thing is certain: Sorghum is gluten-free, offering a possibly overlooked nutritious option for people with celiac disease and nonceliac gluten sensitivity.

Sorghum is an ancient grain, too, but it’s never taken off in quite the same way. A few years back, syrup made from sweet sorghum had a bit of a revival in the States, thanks largely to Southern chefs who liked playing around with old-fashioned ingredients. But the idea of eating sorghum as a grain itself, or in flour form, is still a foreign concept to most Americans, despite the fact that we actually produce the most sorghum in the world (most of it ends up as fuel or animal feed).

Move over, quinoa: sorghum is the new 'wonder grain'

he ancient grain originally from Africa has American chefs raving about its texture, taste and drought-resistance: ‘It fills your mouth and your stomach’

Sorghum and 5 More Ancient Grains You Must Try

If you’re paying attention to all the low-carb, gluten-free diets out there these days, whole grains may not be making it onto your plate on the regular—and many nutritionists say that would be a shame, given all of their nutritional benefits.

Grain sorghum is a dietary staple for more than 500 million people in more than 30 countries of the semi-arid tropics, and is thus one of the most familiar foods in the world (Board on Science and Technology for International Development, 1996). Sorghum remains were found in the Nabta Playa archaeological site in southern Egypt dating back to 8000 B.C.E., making sorghum one of the most ancient of grains (Dahlberg and Wasylikowa, 1996). U.S. consumer interest in ancient grains has stirred interest in sorghum for food applications beyond its use in animal feed formulations and renewable fuels. Further, sorghum is inherently gluten-free and has been demonstrated as safe for people with celiac disease (Ciacci et al., 2007).

Sorghum is Africa’s contribution to the small number of elite grains that supply about 85% of the world’s food energy. Only four other foods rice, wheat, maize, and potatoes are consumed in greater amounts by the human race.

Sorghum (also called milo) is known as “the camel of crops” because it doesn’t need much water and grows in soils other grains won’t. Seed and fertilizer costs for Sorghum are also lower than for other grains.

You’ve been hearing smatterings about these “trendy” ancient grains for awhile now—so you decide to see what all of the fuss is about. But when you get to Trader Joe’s and see the real estate they’ve managed to secure, the feeling that comes over you is nothing short of grain-induced panic.

In the U.S., sorghum recently has gained some traction in the food industry as a gluten-free grain, fueling demand beyond traditional buyers in the livestock and ethanol sectors.

Heat, Drought Draw Farmers Back To Sorghum, The 'Camel Of Crops'

Much of the world is turning hotter and dryer these days, and it's opening new doors for a water-saving cereal that's been called "the camel of crops": sorghum. In an odd twist, this old-fashioned crop even seems to be catching on among consumers who are looking for "ancient grains" that have been relatively untouched by modern agriculture. Sorghum isn't nearly as famous as the big three of global agriculture: corn, rice and wheat. But maybe it should be. It's a plant for tough times, and tough places.

Sorghum is a whole grain, grown in America, with many health benefits. You can use this super grain like rice or quinoa to prepare a delicious side dish or as the base for a main meal. Sorghum is a nutrient-rich, plant-based protein source that is naturally gluten-free and high in antioxidants. The whole grain goodness of sorghum helps you stay fuller longer and serves as a source of dietary fiber that promotes digestive health.

We're here to help farmers and future farmers grow sorghum. Heck, we'll even grow it for you! Add to that, harvesting, processing, milling, distribution and incubator services, American Sorghum is coming your way soon!