Where in health am I? : Home / Health Cloud / StaynHealthy / Drink / Alcohol / Impaired Driving

You can hand over your keys or your life. Make the right choice - Anonymous 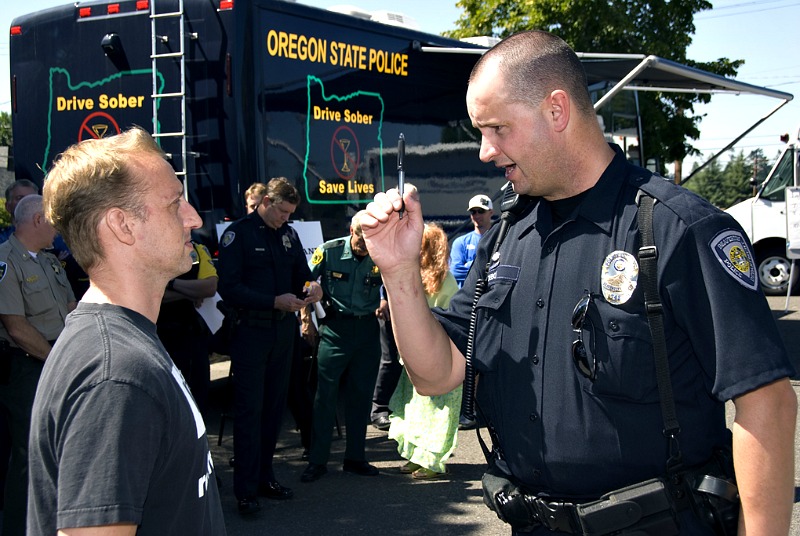 image by: Oregon Department of Transportation

Why Drunk Driving Checkpoints Should Be Celebrated, Not Avoided

A Florida defense lawyer and libertarian has become a YouTube sensation by recommending that drivers pulled over during checkpoint stops to detect drunk drivers do not open their windows or speak to police officers. At last count, Warren Redlich’s video has more than two million views. Instead, he recommends that they display a sign, which he has made, indicating why they are politely refusing to cooperate.

In the United States, lawyers are free to give advice about avoiding arrests. But maybe it is time to remind ourselves that drunk driving is not a game. There are scientifically based public health reasons for why municipalities put up…

A Push To Have Cars Say 'No' To Drunk Drivers

As cars become smarter and safer, some members of Congress want to require them to be built to prevent drunk driving.

Sobering new data on drinking and driving: 15% of US alcohol-related motor vehicle fatalities involve alcohol under the legal limit

A new study found that motor vehicle crashes involving drivers with blood alcohol concentrations (BACs) below the legal limit of 0.08 percent accounted for 15% of alcohol-involved crash deaths in the United States. Of these deaths, 55% of fatalities were individuals other than the drinking driver, and these crashes were more likely to result in youth fatalities compared with crashes above the legal BAC limit.

The designated driver role gets a modern update, covering dangers from COVID-19 to social media

The designated driver (DD) is a successful public health strategy dating back to the late 1980s. To better reflect the realities of today’s society, now is a good time to evolve the initiative to help mitigate the harms tied to broader substance use and beyond drinking and driving.

Getting to zero alcohol-impaired driving fatalities: an insider’s view

Beefing up on-the-road sobriety checkpoints are one way to reduce deaths linked to driving while intoxicated.

Impaired Driving: Get the Facts

Every day, 29 people in the United States die in motor vehicle crashes that involve an alcohol-impaired driver.1 This is one death every 50 minutes.1 The annual cost of alcohol-related crashes totals more than $44 billion.2 Thankfully, there are effective measures that can help prevent injuries and deaths from alcohol-impaired driving.

A new, and dangerous, kind of distracted driver

They hog lanes, ignore emergency vehicles, and treat their cars like multi-tasking way stations. That culture of entitlement makes drivers a new kind of menace.

A single glass of wine will impair your driving more than smoking a joint. And under certain test conditions, the complex way alcohol and cannabis combine to affect driving behaviour suggests that someone who has taken both may drive less recklessly than a person who is simply drunk. These are the findings of a major new study by British transport researchers.

Canada led all nations with alcohol impairment involved in 33.6 per cent of its road fatalities, more than the U.S., New Zealand and Australia at about 31 per cent, and vastly higher than the average rate of 19 per cent.

Drunk driving is a major public health problem in the U.S. In 2014 nearly one-third of the nation’s 32,675 traffic fatalities were alcohol-related. This means a completely preventable death happened every 53 minutes in this country.

It's Time to Get Serious About Deterring Texting While Driving

Study after study has shown that texting while driving is just as dangerous as drunk driving. So if laws are meant to be about protecting the populace, why the disconnect?

There’s little question that the nation’s highways are safer than ever, with traffic-related fatalities at historic lows. However, one trend that has safety officials concerned is that operating a motor vehicle under the influence of prescription drugs or marijuana is fast exceeding drunk driving in the U.S.

The Ultimate Guide to Drowsy Driving

A National Sleep Foundation Poll, relating to planes, trains, automobiles and sleep, sought to identify how much sleep people who operate a vehicle for a living manage to get on average, and how it affects their driving performance.

The Worst Countries In The World For Drunk Driving

Even though fatal accidents on Canadian roads have fallen 43 percent since 2000, the rate of death from alcohol impairment is still high for a developed nation at 34 percent of all road accidents. Across the border in the United States, 31 percent of all road deaths have been linked to alcohol consumption...

Uber Hasn't Had Any Impact on Drunk-Driving Deaths

Why Drunk Driving Checkpoints Should Be Celebrated, Not Avoided

In the United States, lawyers are free to give advice about avoiding arrests. But maybe it is time to remind ourselves that drunk driving is not a game.

5 Facts About Marijuana and Driving High

Just like drunk driving, driving under the influence of drugs is a crime — even if your impairment happened due to prescription drugs.

It’s time to Change the Conversation. Learn more about the impaired driving problem and Speak Your Mind to prevent deaths and injuries on our roads. Share what you're doing and what works with friends and communities across Canada to help others.

AUADD is the first organization to offer replacement or alternative vehicles directly to victims of destructive driving crimes, throughout the country, free of charge...AUADD will always be focused on the undeserved part of highway safety organizations, victims.

To reduce the incidence of drunk driving and its consequences through promotion and awareness to the mainstream in malls, major events, annual tours and the media. To aggressively spread the message across the globe with distribution of patches, stickers etc bearing our powerful name and message.

Ontario Students Against Impaired Driving is a registered Canadian charity working with secondary and high school level students in Ontario. Its topic is impaired driving. The OSAID program is peer to peer based - students talk to other students about the dangers of impaired driving.

RID’s mission is to deter drunk driving, underage drinking and help the victims of drunk driving. Since our inception in 1978, RID has never accepted any funding from the alcohol industry.

The impairment of normal driver behaviour is regarded here as 'a reduced ability to perform adequately the various elements of the driving task'. The cause of driver impairment (or resulting dangerous and erratic behaviour) may be the result of a number of factors such as alcohol consumption, drug ingestion, injury, infirmity, fatigue, the natural ageing process; or a combination of these factors.

SADD envisions a world in which young people make positive decisions that advance their health and safety.