HIV does not make people dangerous to know, so you can shake their hands and give them a hug: Heaven knows they need it - Princess Diana 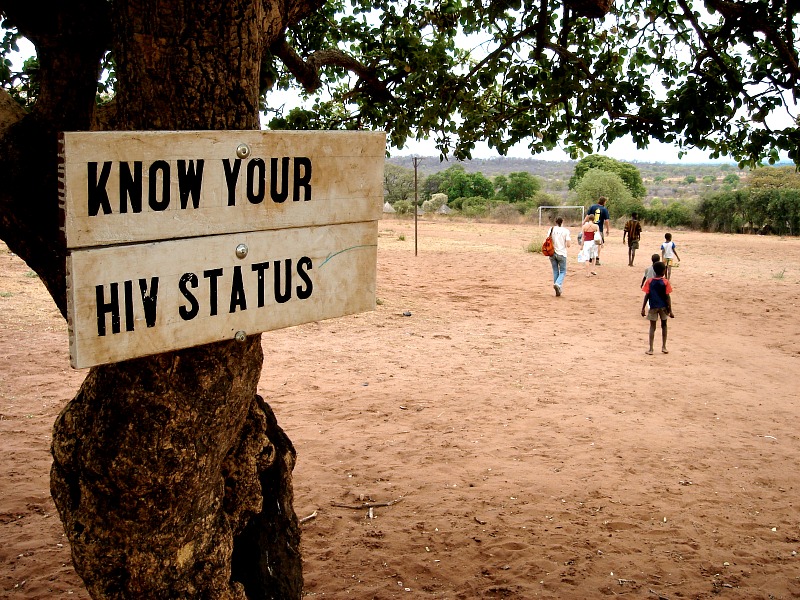 In April 1987, when speculation around the virus was rife, Diana was invited to open Britain’s first AIDS ward at Middlesex hospital. A photograph, which made front-page news around the world, showed her shaking hands with HIV-positive patients without wearing gloves. This publicly challenged the notion that HIV/AIDS was passed from person to person by touch and highlighted Diana's affection and compassion for people living with the disease.

In the following years, she went on to make several bedside visits to patients at a number of hospitals, including a hostel for abandoned children in Rio de Janeiro and a hospice in Toronto.

At the time of her death, Gavin Hart, of…

Today some 36.7 million people are HIV-positive, with more than one million adults dying of AIDS related illnesses this year. There are more people living with HIV than the entire population of Canada, to provide some perspective!

In 2007, the Oscar winner founded the Charlize Theron Africa Outreach Project, an organization that helps fund and support local nonprofits fighting AIDS, with a focus on youth in South Africa. It's an urgent cause: With 7.1 million people living with the disease, South Africa has the largest HIV positive population in the world.

She Helped Shape U2 And Now She's Fighting AIDS

Sheila Roche is a creative and communications consultant to (RED) which she helped its founders Bono and Bobby Shriver set up in 2006 as a mechanism to engage the private sector and consumers in the fight against AIDS.

Michael Weinstein’s AIDS Healthcare Foundation treats an enormous number of patients — and makes an enormous amount of money. Is that why so many activists distrust him?

Very rarely, a crisis occurs that is so urgent it galvanizes the unlikeliest partners and brings out the best in all of them... the global AIDS epidemic did just that.

The battle is ongoing, as researchers, educators, and doctors continue to work tirelessly to stop AIDS once and for all. Here, seven organizations that are on the front lines.

Africa is more heavily affected by HIV and AIDS than any other region of the world. The social impact is most evident in Africa’s growing orphan population. Alicia Keys co-founded “Keep a Child Alive” and has become one of the most powerful women in the fight against HIV/AIDS.

PrEP drugs like Truvada can drastically lower the risk of HIV transmission. But young women in South Africa are pushing for a different kind of change.

Princess Diana captured the world's attention as a royal trendsetter, but during her time in the public eye, she also became a prominent philanthropic force. Diana worked tirelessly on behalf of charities around the world, using her fame to raise awareness of a number of important humanitarian issues. as the "People's Princess."

Founded in 1985, amfAR is dedicated to ending the global AIDS epidemic through innovative research. With the freedom and flexibility to respond quickly to emerging areas of scientific promise, amfAR plays a catalytic role in accelerating the pace of HIV/AIDS research and achieving real breakthroughs.

CTAOP’s mission is to invest in African youth to keep themselves safe from HIV/AIDS.

One of the country''s largest supporters of direct care for people living with HIV/AIDS and preventive education for those at risk. Merging care and commerce, supporters of DIFFA come from all fields of fine design and the visual arts.

Our goal is to provide funding for educational programs targeted at HIV/AIDS prevention and/or the elimination of prejudice and discrimination against HIV/AIDS-affected individuals, and for programs that provide services to people living with or at risk for HIV/AIDS

With more than 28 million dead and 15 million orphaned, the disease continues, wiping out whole societies, threatening economic infrastructure and creating tragic family devastation. We provide life-saving medication, support, and orphan care, to keep these children and families alive. Keep a Child Alive gives 100%* of public donations to our cause.

LIFEbeat is dedicated to reaching America's youth with the message of HIV/AIDS prevention. LIFEbeat mobilizes the talents and resources of the music industry to raise awareness and to provide support to the AIDS community.

As ONE, we are raising public awareness about the issues of global poverty, hunger, disease and efforts to fight such problems in the world's poorest countries. As ONE, we are asking our leaders to do more to fight the emergency of global AIDS and extreme poverty.

RUSH was founded in September 2010 to help breathe new thinking into HIV policy and on-the-ground interventions in sub-Saharan Africa. Our name conveys our determination to cut through the clutter of consensus solutions to provide effective funding for innovative, disruptive ideas to address the pandemic and its social effects.

Saving Lives exists to raise awareness about testing for HIV and other blood-borne viruses (BBVs) or sexually transmitted infections (STIs), including the hepatitis B and C viruses.

Terry Higgins was one of the first people in the UK to die with AIDS. A group of his friends wanted to prevent more people having to face the same illness as Terry. So they named the Trust after him, hoping to personalise and humanise AIDS in a very public way.

The Foundation's main focus is to provide funding to organizations providing critically needed support services for people with HIV/AIDS, prevention services and education for populations most in need

The Global Fund is a 21st-century partnership organization designed to accelerate the end of AIDS, tuberculosis and malaria as epidemics.

Until There's a Cure

Until There's A Cure'' is a national organization dedicated to eradicating HIV/AIDS by raising awareness and funds to combat this pandemic through the sale of The Bracelet.

Break the silence about HIV in the UK. Help us get everyone talking about HIV on World AIDS Day

The primary goal is to raise awareness of the need of destitute and orphaned children in Africa and to raise funds for continued development and support of the Choir''s relief and development programs.

AHF funds its mission to rid the world of AIDS through a network of pharmacies, thrift stores, healthcare contracts and other strategic partnerships. Generating new, innovative ways of treatment, prevention and advocacy has been the hallmark of our success. We are currently leading a mass testing initiative to identify and treat the 25 million people who are unaware they are infected.

The mission of AIDS United is to end the AIDS epidemic in the United States. We will achieve this goal through national, regional and local policy/advocacy, strategic grantmaking, and organizational capacity building, to ensure that people living with and affected by HIV/AIDS have access to the prevention and care services they need and deserve.

Alliance for Housing and Healing

To provide the basic necessities of life to men, women, children, and families living with HIV/AIDS through a safety net of essential housing and direct supportive services.

APLA Health’s mission is to achieve health care equity and promote well-being for the LGBT and other underserved communities and people living with and affected by HIV.

Founded in 2004 to raise AIDS Awareness in the international media and towards the general public, more specifically towards young people in the industrialised countries.

Our mission is to reduce the spread of HIV disease, help people with HIV maintain and improve their health and independence, and keep the prevention, treatment and cure of HIV an urgent national and local priority.

People affected by HIV/AIDS need much more than health care and non-medical support is essential for their overall well-being. HIVSA offers comprehensive, therapeutic care to HIV-positive people, and their families, especially those living in impoverished circumstances.

IAVI''s mission is to ensure the development of safe, effective, accessible, preventive HIV vaccines for use throughout the world. IAVI is a global not-for-profit, public-private partnership working to accelerate the development of a vaccine to prevent HIV infection and AIDS.

The mission of the International HIV/AIDS Alliance is to support communities to reduce the spread of HIV and to meet the challenges of AIDS. We are working to prevent HIV infection; improve access to HIV treatment, care and support; and lessen the impact of HIV and AIDS worldwide, particularly among the most vulnerable and marginalised.

The National AIDS Trust is the UK's leading independent policy and campaigning voice on HIV and AIDS. A registered charity, we develop policies and campaign to halt the spread of HIV, and improve the quality of life of people affected by HIV and AIDS, both in the UK and internationally.

(RED) was created by Bono and Bobby Shriver, to raise awareness and money for The Global Fund by teaming up with the world's most iconic brands to produce (PRODUCT)RED branded products. A percentage of each (PRODUCT)RED product sold is given to The Global Fund. The money helps women and children affected by HIV/AIDS in Africa.

The San Francisco AIDS Foundation provides vital services and programs designed to improve the quality of life for people living with HIV/AIDS and to reduce the number of new infections that occur each year.

Starfish Greathearts Foundation is an international development charity, aiming to bring life, hope and opportunity to orphaned and vulnerable children in southern Africa. We believe that everyone can make a very real difference to the lives of these children.

The Food Chain provides nutrition services including home delivered meals, essential groceries and nutrition advice to men, women and children who are chronically sick as a result of HIV related illness.

The Gere Foundation awards grants to humanitarian organizations supporting victims of war and natural disasters, providing HIV/AIDS care and research and addressing human rights violations occurring around the world. Our primary mission is to assist the cultural survival of the Tibetan people through health, technological and educational projects.

The Stephen Lewis Foundation (SLF) supports community-based organizations working to turn the tide of HIV/AIDS in Africa. Since 2003, we have funded more than 700 initiatives with 300 organizations in 15 countries.

We are an innovative joint venture of the United Nations family, bringing together the efforts and resources of ten UN system organizations in the AIDS response to help the world prevent new HIV infections, care for people living with HIV, and mitigate the impact of the epidemic.