Where in health am I? : Home / Blogs and Commentaries / Celebrity Health / Nothing Tastes as Good as Skinny Feels

Eating disorders thrive on secrecy and very few people and celebrities come out and admit they have weight problems, food issues or disorders of any sort. Kate Moss inadvertently let her dieting philosophy slip, "Nothing tastes as good as skinny feels"

In the glamorous, competitive world of entertainment it is understood that for a woman to be successful she needs to have a skeletal appearance. The more famous they are they thinner they become. There is very little talk of what these women do to get that way or how dangerous it may be to maintain such a low body weight. Instead, they claim they’re either naturally thin, genetically blessed, or have a freakishly high metabolism. Right. All jobs have some sort of requirement and being emaciated is clearly a requirement for actresses and models.

Nearly all us personally know someone that is, or has, dealt with an eating disorder. I’ve watched several people around me struggle to recover and one childhood friend died due to complications from anorexia.  The mental anguish that they go through everyday is absolutely heartbreaking, not to mention what their families endure. Why does someone feel the need to starve? How and why do eating disorders manifest?  Is it their family life? Trauma?  Or, are Hollywood and the unrealistic images they represent responsible?

I’m not sure if Hollywood is entirely to blame for the thinning of women, but they sure do feed on our insecurities.  We are inundated with images of beautiful women’s bodies that are incredibly thin -and airbrushed to appear thinner. Yet we believe they are naturally that way. The freakishly thin are the norm – we are the anomaly.

In a recent interview British model Kate Moss inadvertently let her dieting philosophy slip, "Nothing tastes as good as skinny feels."  Interesting, because for many years Kate Moss has always claimed to be another one of those “naturally thin - eat whatever I want” people.  But the truth comes out eventually.  She does starve herself and has been doing so for a long time. I don’t know whether to feel comforted that she is like everyone else or just really sad for her.  Moss’ statement clearly shows an unhealthy attitude towards food and body image.

Kate Moss is famous for the heroin chic, waif look that millions of girls around the world have been trying to emulate since the 90’s. And because she has been starving herself for so many years I’m not sure she realizes how dangerous her statement was. Anorexics were listening though and they took her words to heart.  Moss has now become the official poster child for pro-anorexia and pro-bulimia websites. Anorexics loved her comments; they received validation from one of their heroes.  It added more fuel to the eating disordered mind.

Nicole Richie is another actress that has publicly battled anorexia. The pictures of her running on the beach in her bikini are so sad and a bit gross actually.  Richie has never come out and said she was anorexic, but admitted to working with a psychiatrist and nutritionist to gain weight.  She says she does not want to be a role model as she's still trying to figure things out for herself. "Part of the reason I don't really talk about [it] is that I don't want to feel the pressure of being a role model," she says. "I am learning so much about myself that for me to tell other people what to do in their lives is something I'm not really fit to do. I'm a work in progress.  I'm not there yet. I don't know if I'll ever be there". 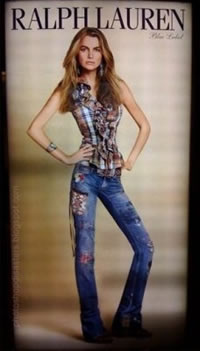 Then there’s the Ralph Lauren model whose photo was air brushed so much that her head was actually bigger than her hips.  That photo created so much outrage from the public and advocacy groups that Ralph Lauren pulled it from ads here in America however, continued to use it in Asia.  More frightening than the photo is the fact that the model was recently released from her 10 year contract with Ralph Lauren for being overweight.  She is 5’10” and weighs 120 lbs.  Overweight? Are they kidding?

It is so sad; yet, this is what young girls are dealing with every day of their lives. From early on girls are taught that their looks matter most. Images on TV and in magazines tell us we need to be thin and beautiful in order to be happy. There is a constant onslaught of commercials featuring beautiful, skinny people hawking the latest diet wonder drug. If we buy it we’ll have the same glamorous life as the people on TV, right? If I can just lose 5 pounds people will like me more.

As a result of the unrealistic images on TV many American women feel overweight, even though they may be a healthy, average size. We’ve been given the message that happiness and success come with a thin body: the thinner the better.  Consequently, television characters that are overweight are perceived as lazy, lonely, or rejected. They are usually the butt of humiliating jokes and often portrayed as "the bad guy” or the “stupid sidekick”.  How can children learn that it's what's inside that counts when what they see on television contradicts that message?

Anorexia Nervosa is a very serious, chronic, potentially life-threatening eating disorder that requires aggressive medical and psychological treatment. There are an estimated 8 million anorexics, one in 200 women, in the United States. Anorexics are frequently high-achieving perfectionists who typically suffer from low self-esteem and high anxiety levels.  It is often called the “good girls disease” as they have an overwhelming desire to please others.  The warning signs for anorexia are pretty obvious.  Most notably is a dramatic weight loss of approximately 15% of normal body weight.  Some of the lesser warning signs include: an obsession with weight, food, calories, fat grams, dieting and excessive exercise.

If left untreated, anorexics may develop osteoporosis, anemia, infections, electrolyte imbalances, kidney and heart failure. Additionally, anorexia has the highest premature death rate of any psychiatric disorder due to suicide or medical complications. A study by the National Association of Anorexia Nervosa and Associated Disorders found that 5 – 10% of anorexics die within 10 years after contracting the disease; 18-20% of anorexics will die after 20 years and only 30 – 40% ever fully recover.

Despite the grim statistics there is hope. Don’t let someone you know and love continue to keep this horrible disease a secret anymore.