Where in health am I? : Home / Blogs and Commentaries / Celebrity Health / Heidi Montag – Plastic Surgery Addict or Fake It Until You Make It!

Cosmetic surgery is really getting out of hand. Sadly, improving ones image through surgery is now an acceptable, easy way for young people to fix their perceived “flaws”

Heidi Montag, typifying this trend, recently underwent 10 hours of plastic surgery to become what she calls "the best me". One thing I will never understand about Hollywood is how a seemingly illiterate dingbat and her super rude, controlling, obnoxious husband can manage to parlay their offensive personas into a Z-list money making career.

Do you know who I’m talking about? If you’ve picked up a tabloid lately you’ll know I’m talking about Heidi Montag and Spencer Pratt. The married “Hills” stars have turned their “exciting” life into a profession and are being paid tens of thousands of dollars to show up at public events. They cater to the paparazzi who in turn follow the couple everywhere feeding their over inflated egos. The couple really does nothing more than make Southern Californians look vapid and phony to the rest of the world. I’m kind of angry that I even know who they are. I never thought I would ever give the duo known as “Speidi” (pathetic) the time of day. But here I go.

Maybe you’ve noticed that the last few months have been a little light on “Speidi” citings.  What’s going on?  Had they finally realized how seriously awful they are? Were they embarrassed by their own behavior?  Unfortunately, no.  They’ve been up to something even more attention seeking than their norm. And silly me, just when I was feeling safe to open up a Speidi-free tabloid again, Boom, there they were.  EVERYWHERE.

Why? Because Heidi Montag recently spent $30,000 and underwent 10 hours of plastic surgery to become what she calls "the best me."  In one day,  the 23 year old had the following procedures done (plus a few extras) DDD breast implants, pinned back her ears, butt augmentation, chin reduction, mini brow lift, liposuction in her neck, waist, and thighs, and fat injections in her cheeks and lips.  My God!

I never really had an opinion about Montag’s looks one way or the other.  She was blond and thin.  Here in California that look is a dime a dozen.  But clearly she had serious issues with her looks and in this week's People, Montag describes her behavior as “beyond obsessed, I’m absolutely beyond obsessed…with my looks." (Ya, think?) Montag said that over a 2 year period she consulted her plastic surgeon more than 20 times and asked the Lord to guide her in her decision to undergo the surgery. (Apparently the Lord approves of DDD breast implants!)  Montag justifies her actions by saying that, “whatever women need to do to feel sexy, they should do. I’ve always been very insecure about my body, my whole life.”  (Very, very sad) 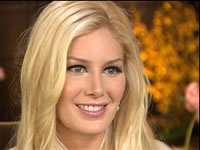 On the day of the surgery Montag said, “I woke up, and it was like Christmas. I was a nervous wreck, but I was just so excited at the same time. Spencer (her husband) said, ‘I’m so proud of you.’ (How sweet!) But surgery is a very big deal. Right before I went in, I was like, What if I don’t wake up? Oh, this is scary. Then I thought, I don’t care. If I don’t wake up, it’s worth it. I just wanted it so badly.” (It’s worth it????? Big boobs are worth dying for?????)

Many of us have wondered what it would be like to go under the knife and tweak a few things that bother us.  I’ve thought about liposuction or getting my eyes done but Montag’s account really makes me stop and think twice. She says she “woke up in a blur, in excruciating pain and seeing stars. I started crying hard," she said in an interview with People magazine. "I was like, I feel like I wanna die right now. I'm in so much pain. I don't know what to do.” When she was finally able to return home, she made her husband cover all the mirrors in the house to hide her swollen, bruised body. She says, "I looked like I had been hit by a bus.  I was a purple, swollen mush." (Pretty!).

Plastic/cosmetic surgery covers a lot of territory, including reconstructive surgery, resurfacing, injections, tucks, pulls and lifts along with a variety of non-surgical treatments and procedures. However, there are major differences between reconstructive and aesthetic plastic surgery.  Removing a bump on your nose is one thing, DDD breast implants to further your career (Montag) or fulfill some deeply rooted self esteem issues is entirely different.

Not surprisely plastic surgery is really getting out of hand, especially for younger girls. Statistics from the American Society for Aesthetic Plastic Surgery show that cosmetic-surgery procedures performed on girls 18 and younger have nearly tripled over the past decade and nearly 14% of all Botox injections are given to those between the ages of 19 and 34. (Who has wrinkles at 19?) Director Nora Ephron sums it up perfectly, "I think it's a very interesting time for girls, what we all grew up believing—that you have to play the hand you're dealt—it’s no longer true. In some sense, you really can go out and buy yourself a better face and a different body."

Plastic surgery is not without risk. Finding a doctor or clinic you can trust is imperative. To help you make an educated responsible choice check out 'The Evolving Face of Cosmetic Surgery'.

There are so many things to say about Heidi Montag and Spencer Pratt, they’re delusional, pompous, exasperating, and they seriously need to find a hobby.  Otherwise, what are they going to do when their 15 minutes are up?  We’re already at 14 and counting…