If it works, we would call it a functional cure. It’s not truly a cure because we wouldn’t address the autoimmune cause of the disease, but we would be replacing the missing cells - Paul Laikind 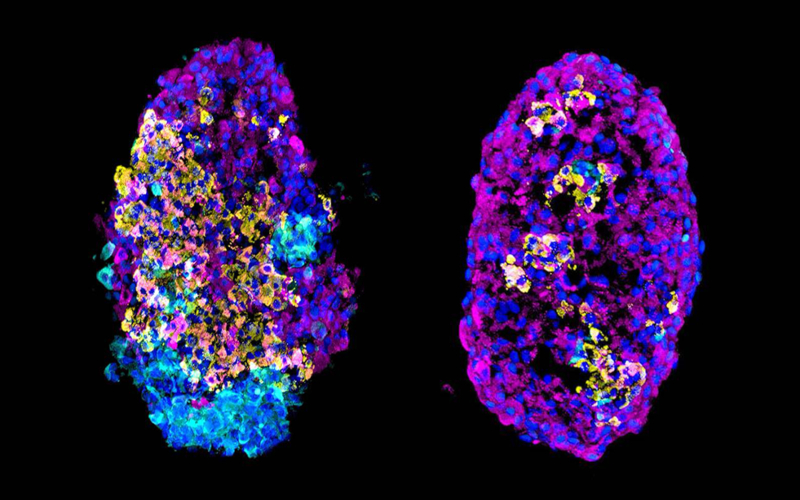 A Pancreas in a Capsule

Fourteen years ago, during the darkest moments of the “stem-cell wars” pitting American scientists against the White House of George W. Bush, one group of advocates could be counted on to urge research using cells from human embryos: parents of children with type 1 diabetes. Motivated by scientists who told them these cells would lead to amazing cures, they spent millions on TV ads, lobbying, and countless phone calls to Congress.

Now the first test of a type 1 diabetes treatment using stem cells has finally begun. In October, a San Diego man had two pouches of lab-grown pancreas cells, derived from human embryonic stem cells, inserted into his body through incisions in his back.…

In the fight against Type 1 diabetes, drugmakers are pursuing a new line of attack: creating cells that help the body beat the condition. Biotechnology companies ViaCyte Inc. and Semma Therapeutics Inc. hope to solve the donor-shortage problem by coaxing stem cells to mature eventually into other cells that make insulin and other hormones.

There’s more plasticity in the pancreas than we thought... Scientists from UC Davis found that the pancreas, which secretes a hormone called insulin that helps regulate the levels of sugar in your blood, has more “plasticity” than was originally believed. In this case, plasticity refers to the ability of a tissue or organ to regenerate itself by replacing lost or damaged cells.

The stem cell based therapy for diabetes aims to replace the diseased or lost cells of the pancreas with new cells using pluripotent or multipotent stem cells. Scientists successfully produced insulin secreting cell from different types of stem cells. In this article we briefly reviewed the progress made in the stem cell research for diabetes treatment.

ViaCyte's encapsulated islet cell technology for type 1 diabetes has shown positive survival rates after two years in humans. The PEC-Encap product, also known as VC-01, is a pioneering stem cell therapy that involves a pouch which encapsulates lab-grown human islet cells. It has been designed to replicate how a healthy pancreas works in someone who does not have diabetes and work as a 'functional cure' for people with type 1 diabetes. The PEC-Encap product is implanted under the skin during a simple outpatient surgical procedure. The cells that are passed into the body have been designed to mature into pancreatic cells that secrete insulin and regulate blood sugar levels.

Timothy J. Kieffer and his team of researchers at the University of British Columbia were recently awarded the prestigious 2015 Till-McCulloch prize in recognition of a breakthrough paper they published detailing a promising way to mass produce insulin secreting cells for patients with Type 1 diabetes.

The researchers behind two studies published Monday demonstrated they had made progress on both fronts, encapsulating the cells in a protective bubble to shield them from the body’s immune response, and creating beta cells from stem cells, which are potentially limitless.

“If it works, we would call it a functional cure,” says Paul Laikind, of Viacyte. “It’s not truly a cure because we wouldn’t address the autoimmune cause of the disease, but we would be replacing the missing cells.”

A Pancreas in a Capsule

Stem-cell advocates pin their hopes on a method of treating diabetes.

Our cell therapy development efforts do not use stem cells, but rather offer a much more targeted approach using fully mature, adult cells. For our purposes, in the treatment of diabetes, our cells are derived from the liver or other adult tissue and are transdifferentiated to become adult AIP cells.

Sernova’s primary focus is the development of technologies for the treatment of patients with insulin-dependent (T1) diabetes, hemophilia A and thyroid disease.

ViaCyte, Inc., a leader in the emerging field of regenerative medicine, is headquartered in San Diego, California. ViaCyte's innovative product is based on the differentiation of stem cells into pancreatic beta cell precursors (PEC-01™), with subcutaneous implantation in a retrievable and immune-protective encapsulation medical device (Encaptra® drug delivery system).