Where in health am I? : Home / Health Cloud / Challenges / Heart / Procedures / CPR

Our greatest weakness lies in giving up. The most certain way to succeed is always to try just one more time - Thomas A. Edison 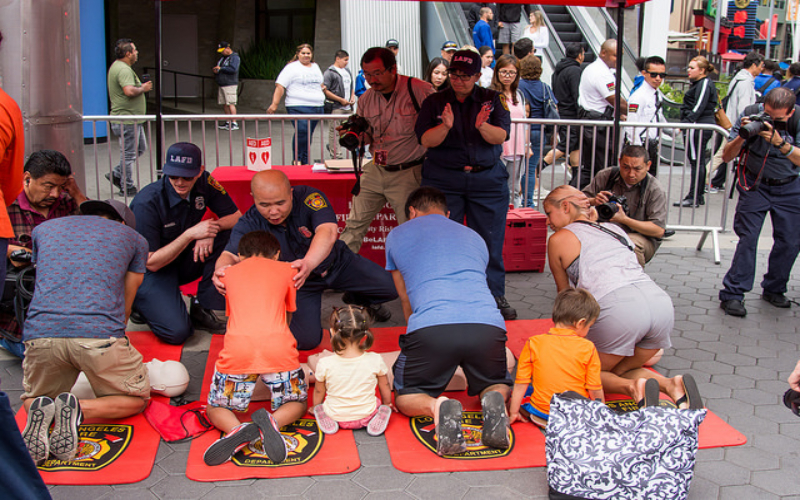 CPR is universally accepted worldwide as the emergency procedure of choice that is performed on people who have stopped breathing (respiratory arrest) or whose heart has stopped beating (cardiac arrest).

Contrary to popular belief, CPR is not meant to and is unlikely to restore a heartbeat. The objective of CPR is to keep the blood circulating, similar to 'priming the pump', until more advanced personnel arrive. CPR is just a part of the continuum of the medical management of cardiac arrest. If heart function is restored, it is usually by trained medical personnel with a medical device such as a defibrillator.

But, despite the advent…

EVERYONE CAN SAVE A LIFE. It takes less than a minute to learn how to save a life.

When very old patients suffer cardiac arrest, doctors usually try to revive them — even if they were already near death.

Secretary of education Damian Hinds announced today (Jan. 3) that as of 2020, every secondary school student in the UK will be trained in first aid and cardiopulmonary resuscitation (CPR) techniques, as part of an upcoming reform of health, relationships, and sex education in state-funded schools. Students will be taught how to administer CPR, how to use a defibrillator, and how to identify and deal with common injuries like head trauma.

"High Quality CPR" and You!

CPR as we know it was “invented” by numerous resuscitation scientists working in competing labs during the 1950s. Since then, CPR has gone through a number of changes, from compression-to-ventilation rates, training programs and even the manner in which it is delivered.

Doctors are already talking about changing the way they staff the team that performs ECMO, during which an extracorporeal membrane oxygenation machine oxygenates blood while bypassing the heart and lungs. Could more kids like Owen survive lengthy CPR?

In the best circumstances maybe one or two are going to survive...But the public believes in 9 out of ten. Hollywood changes the perception - Dr. Howie Mell

Concerns about inappropriate contact or causing injury may help explain why bystanders are less likely to perform CPR on women – even “virtual” women - than on men who collapse with cardiac arrest, according to two studies presented at the American Heart Association’s Resuscitation Science Symposium 2018...

No one is busier dying than a patient in refractory ventricular fibrillation (RVF). These patients have exasperated EMS personnel for decades, and they, sadly, usually die. The treatment traditionally has been to administer ACLS for 30–45 minutes, and the lucky few who get a return of spontaneous circulation (ROSC) get admitted. The survival rate using this approach has been around 8%. But, with the advent of adult, extracorporeal membrane oxygenation (ECMO), the approach to these patients may be changing.

Numerous studies have shown that abrupt increases in ETCO2 pressures exceeding 10 mmHg that remain higher than preceding values suggest an increase in cardiac output and is indicative of ROSC, hence the incorporation of such measures in ACLS guidelines.

PulsePoint: An App with Lifesaving Potential

Got cardiac arrest? There's an app for that, and it's called PulsePoint. With any luck it's coming to a town near you. And it just might save your life—or help you save someone else's.

The Evolving Science and Guidelines of CPR

In spite of what the entertainment industry would have you believe, it is extremely difficult to save the life of someone in cardiac arrest. A few random breaths, slow rocking chest compressions, even the ever-so-dramatic overhand blow to the chest accompanied by the scream “Don’t you die on me, dammit!” are unlikely to successfully resuscitate someone following an arrest, and even if it does, they won’t be in any shape to go chase Locke across the island with Jack and Kate five minutes later.

The science of bringing the recently dead back to life

We're now at a point where resuscitation has quietly become a mundane reality, with millions of people certified in CPR and automatic defibrillators installed in thousands of public buildings. But how did we get here — and what does the future of resuscitation look like?

Evidence that doctors approach their own end-of-life care differently from everyone else.

Can Faster Chest Compressions During CPR Save More Lives?

The takeaway from this study is that speed matters , and medical providers should aim for at least two compressions every second. While this research was limited to those with in-hospital cardiac arrest, it will be important to study this among bystanders delivering CPR. AEDS or "automated external defibrillators," may also be important to helping meet this goal, helping to deliver verbal instructions to increase speed to help save more lives.

Resuscitation: It’s as old as the healing arts, as new as a drone delivering an automated external defibrillator (AED). And from primitive methods (like whipping an unconscious victim with stinging nettles) to modern-day cardiovascular pulmonary resuscitation (CPR), the evolution of resuscitation has been marked by profound aha! moments alongside decades of abandoned lifesaving methods.

How CPR Became So Popular

'Medical creep' happens when doctors perform procedures or prescribe treatments for patients in the absence of clear evidence that patients will benefit. The slow changes can gradually transform the structure of our healthcare system—sometimes for the better.

Increasing CPR Training to Save Lives

In the 40-odd years since I learned CPR at The New York Times, the American Heart Association has simplified the technique while barely compromising its effectiveness. Although an in-person class with practice on a mannequin is ideal, the current method can be used by untrained people and learned via a brief online video at Hands-Only CPR. For those unwilling or unable to do mouth-to-mouth breathing, the latest technique focuses on critical chest compressions, which — when done correctly — can get blood flowing through the heart and to the brain.

Is offering 'futile resuscitations' really the right thing to do?

CPR was invented to restart the heart following specific heart-rhythm abnormalities, and was very effective in doing so. Since then, its scope has been expanded to become the default for anyone whose heart stops, despite the fact that its efficacy is extremely limited in most medical conditions. CPR is ineffective in many patients, as it does not correct the underlying conditions that caused death, such as cancer.

CPR is the most famous technique in first aid class—and a melodramatic movie trope—but some will argue that it does more harm than good. That’s really only the case if you don’t know what you’re doing, which is all the more reason that people should learn how to do it right!

Sudden Cardiac Arrest? Is There Hope?

A program called SMSlivräddare, (or SMSLifesaver) (link in Swedish) solicits people who’ve been trained in cardiopulmonary resuscitation (CPR). When a Stockholm resident dials 112 for emergency services, a text message is sent to all volunteers within 500 meters of the person in need. The volunteer then arrives at the location within the crucial first minutes to perform lifesaving CPR. The odds for surviving cardiac arrest drop 10% for every minute it takes first responders to arrive.

Sudden cardiac arrest outcomes continue to remain dismal despite CPR. But, anybody can perform CPR, including children. It's not how well CPR was done, but whether it was done at all!

Survival from out-of-hospital cardiac arrest remains unacceptably low worldwide, and it is the leading cause of death in developed countries.

We provide education and reference materials to healthcare professionals and the general public in the most effective methods of resuscitation.

The SCA Foundation, a nonprofit organization, has been established to help increase awareness about this public health crisis and reduce death and disability from SCA, through this website and other initiatives.

As the world leader in CPR, first aid and emergency cardiovascular care (ECC) training and education, the American Heart Association offers a variety of options for you to learn lifesaving skills. Locate a local training center to become an AHA Instructor or to choose courses for family members and friends, employees, or healthcare providers.

PulsePoint is a 501(c)(3) non-profit foundation based in the San Francisco Bay Area. Our mission is to make it much easier for citizens who are trained in CPR to use their life saving skills to do just that…save lives! Through the use of modern, location-aware mobile devices PulsePoint is building applications that work with local public safety agencies to improve communications with citizens and empower them to help reduce the millions of annual deaths from Sudden Cardiac Arrest.

The letters in CPR stand for cardiopulmonary resuscitation, a combination of rescue breathing (mouth-to-mouth resuscitation) and chest compressions. If a child isn't breathing or circulating blood adequately, CPR can restore circulation of oxygen-rich blood to the brain. Without oxygen, permanent brain damage or death can occur in less than 8 minutes.

If you were with someone who had a heart attack or almost drowned, would you know what to do? If you know how to perform cardiopulmonary resuscitation (CPR), you could save a life. CPR is an emergency procedure for a person whose heart has stopped or is no longer breathing.

Sudden Cardiac Arrest: Cool the Body, Save the Brain

Sudden Cardiac Arrest: Cool the Body, Save the Brain