Where in health am I? : Home / Health Cloud / Challenges / Gastrointestinal / Reye's Syndrome 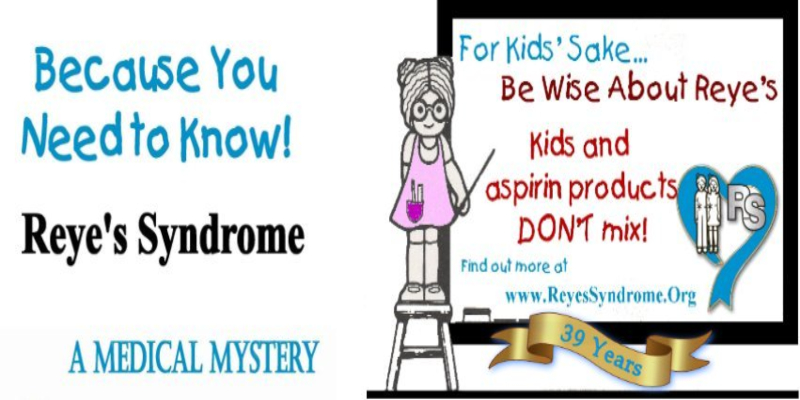 In the deep, dark, quietest hour of Palm Sunday in 1973, a sweet, beautiful, and innocent little girl took God’s hand and stepped bravely into heaven.

A year later, another little five year old fought and fought and was given a second chance. During the year between the two cases, unknown numbers of children died of a mysterious illness. Doctors were confounded. Parents grieved, and found no answers. And children died… and died.

The National Reye’s Syndrome Foundation was founded in 1974 by those two sets of parents whose five year old children were victimized by Reye’s Syndrome with the bold intent of unmasking this horrible monster that terrorized helpless children.…

Although aspirin is an old drug, we often mistakenly take its safety for granted; it can be a dangerous drug, especially for children. You might be surprised at the number of medications that contain aspirin (salicylates)...

Reye's syndrome: What you need to know

Research suggests that there is a link between Reye's syndrome and taking aspirin while having viral diseases, such as flu or chickenpox. Though the links are not conclusive, the U.S. Surgeon General, the Food and Drug Administration, the Centers for Disease Control and Prevention (CDC), the American Academy of Pediatrics, and the National Reye's Syndrome Foundation all recommend that aspirin should not be given to anyone under the age of 19 with a fever or signs of viral illness.

Whatever Happened to the Debate About Aspirin And Reye’s?

Could the warning labels on aspirin do more harm than good?

Unfortunately, we still see many parents who do not know about Reye’s Syndrome; they do not know what Reye’s really is or what the symptoms are – they were just told by their doctors not to give children aspirin. And they are not told that products like Pepto-Bismol, and Alka-Seltzer, and Pamprin and many many other prescription drugs and over the counter medicines contain aspirin (salicylates).

In 1974, the National Reye's Syndrome Foundation, a health advocacy organization, was incorporated as a 501(c)3 charity, whose mission is to eradicate the incidence of Reye's Syndrome.

Unfortunately, there is no cure for Reye’s Syndrome, so most of our efforts to eradicate this disease has to be in Educating and promoting Awareness. Our largest program is our Annual School Mailing.

Reye's syndrome (RS) is primarily a children's disease, although it can occur at any age. It affects all organs of the body but is most harmful to the brain and the liver--causing an acute increase of pressure within the brain and, often, massive accumulations of fat in the liver and other organs.

Reye syndrome is an extremely rare but serious illness that can affect the brain and liver. It's most common in kids who are recovering from a viral infection. Reye syndrome is named after Australian pathologist R. Douglas Reye, who first reported it in 1963.

Although the cause is still unclear, studies have identified that there is a relationship between some viral infections and the use of aspirin medications. The CDC recommended educating parents about the dangers of treating children with aspirin in the 1980s, and now the disease occurs very rarely.

In individuals with Reye syndrome, disease severity may be extremely variable. According to reports in the medical literature, some affected individuals may have mild symptoms without disease progression.

The exact cause of Reye's syndrome is unknown, but most cases have occurred in children and young adults recovering from a viral infection – typically, but not exclusively, flu or chickenpox – and in most of these cases they had taken aspirin to treat their symptoms.