Where in health am I? : Home / Health Cloud / Challenges / Eye / Pterygium

No object is mysterious. The mystery is your eye - Elizabeth Bowen 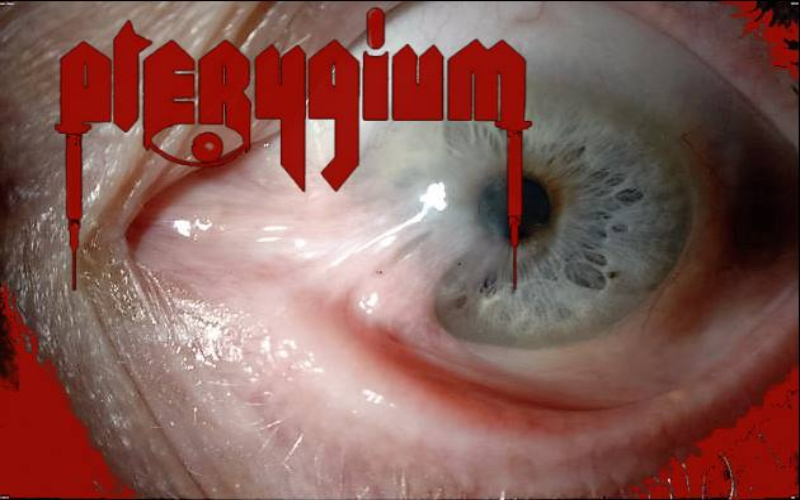 I Got A Pterygium Cut Out of My Eyeball, and I Learned These 20 Things

He slid his knife into my eyeball, and I smiled. The feeling was euphoric. Which had less to do with the blade slicing through the mutated film invading my iris and more to do with the Versed coursing through my veins. Minutes earlier, I lay naked beneath my hospital gown in bed. I was scared. The nurse had just slipped a chilling IV into my vein and asked if I felt comfortable. I did not. And I’m not afraid of needles. As a Type One diabetic, I actually have a subcutaneous catheter pulsing insulin into my body 24-hours a day. That’s been the case every day for the last 27 years. So needles don’t freak me out.

But needles in my veins do. And knives in my eyeballs do. So just before…

Do You Have a Pterygium?

The most common surgical technique involves surgical removal of the pterygium, placement of a preserved amniotic membrane graft (from the placenta) or a small graft of the patient’s own conjunctiva taken from the superior (upper) part of the conjunctiva to cover the area where the pterygium was removed, and using fibrin glue and/or small sutures to hold the graft in position.

Dr. Brian’s I-BRITE procedure can remove pterygium. The procedure involves removing the outer layer of the conjunctiva of each eye. Over time, a new membrane will grow in its place.

I’m partly writing this for those who may be undergoing Pterygium removal surgery and want to know what to expect. Being fully aware of what to expect during the recovery period is the most important. I had the surgery that involves stitches.

There is a lack of consensus in the ophthalmological community about the optimal medical and surgical management of pterygia. Early in the disease process, physicians often take a conservative approach, limiting therapy to lubricating medications.

Treatment of pterygium ranges from more conventional means to less traditional, more natural options. A variety of natural substances are effective for treating and eliminating pterygium. These treatments discontinue and even reverse growth of pterygium.

Patient-reported results of a novel treatment for pterygium and pinguecula, a common incurable eye condition have recently been reported. The treatment utilizes the well-known cardiovascular drug dipyridamole in eye drop form. Dipyridamole has been in clinical use for 55 years, and is now being repurposed for treating intractable eye conditions such as pterygium, pinguecula and severe dry eye.

Pterygium is a wing-shaped ocular surface lesion traditionally described as an encroachment of bulbar conjunctiva onto the cornea.1 Historically, pterygia were considered degenerative lesions, exemplified by degradation of Bowman's layer and elastosis. Currently, however, pterygia are described as a proliferative disorder resembling an aberrant wound healing response

Protect Your Peepers — The Dangerous Sun’s Effects on Your Eyes

At the end of the day, the best treatment for pterygium is prevention. It is a good idea to start children early and get them into the habit of regularly wearing sunglasses.

It'll be interesting to see if advances in surgical procedures make pterygium surgery less 'mechanical' in future. Prior to having my surgery I'd already heard of chemical removal of pterygium's but it wasn't an option made available to me and it's possible that it's still an experimental procedure. It's worth looking into though if you're considering surgery.

Pterygium: What Is "Surfer's Eye"?

A pterygium (tuh-RIJ-ee-uhm) is an elevated, wedged-shaped bump on the eyeball that starts on the white of the eye (sclera) and can invade the cornea. If you have more than one of these eye growths, the plural form of the word is pterygia (tuh-RIJ-ee-ah). Though it's commonly called "surfer's eye," you don't have to be a surfer or ever see the ocean to get a pterygium. But being in bright sunlight for long hours — especially when you are on water, which reflects the sun's harmful UV rays — increases your risk.

Requiem for a pterygium

Halloween is going to be different this year. In years past when kids would come to the door to threaten us in to giving them candy (saying something on the order of “nice house, I’d hate for something to happen to it”) I would poke my face out, eyeball first, and give them a flash of my pterygium (a.k.a. eyeball jelly growth thing).

This case of scleral thinning illustrates a complication that can arise after the I-BRITE procedure. Comprehensive ophthalmologists should be aware of the potential risks and complications with this surgery, the surgery known as regional conjunctivectomy with MMC, and the alert issued by the ASCRS regarding the procedure.

A young man recently came to me with advanced Pterygium growths on his eyes. He was terrified of surgery and the look of fear in his face was striking. A close friend of his had the same Pterygium surgery years ago with another doctor and had a really hard time after the surgery.

There's A Bump on My Eye Part 3: Pterygium

Pterygia can grow so aggressively over the cornea that they begin distorting vision and inducing a lot of astigmatism. If this is occurring, your doctor is going to recommend a surgical procedure to reduce the pulling on the cornea. Surgery for pretygia is difficult; your surgeon must protect the delicate cornea underneath to prevent permanent vision loss with scarring. And pterygia can grow back after removal because the conjunctival tissue has changed in that area with a callous-like growth pattern.

I Got A Pterygium Cut Out of My Eyeball, and I Learned These 20 Things

It's a scary procedure, but the more we are able to share our experiences, the more knowledge is available for future candidates.

Professor Lawrence Hirst has been conducting clinical research into pterygium for the past 25 years and has contributed more to the peer-reviewed scientific literature on this subject than any other single Australian or overseas researcher.

This is a 100% no-stitch procedure. It is typically a 15 minute procedure and you can usually resume work and your daily routine within 1-7 days. The whiter eye results are often visible within 4-6 weeks after the procedure. As with any procedure, individual results will vary primarily due to differences in healing responses.

Most pterygia cause no problems and do not need treatment. If a pterygium affects the cornea, removing it can have good results.