Where in health am I? : Home / Health Cloud / Challenges / Eye / Iritis

There are countless causes of iritis, which is to say that no one can tell you why your eyes are on fire - Laura Novak 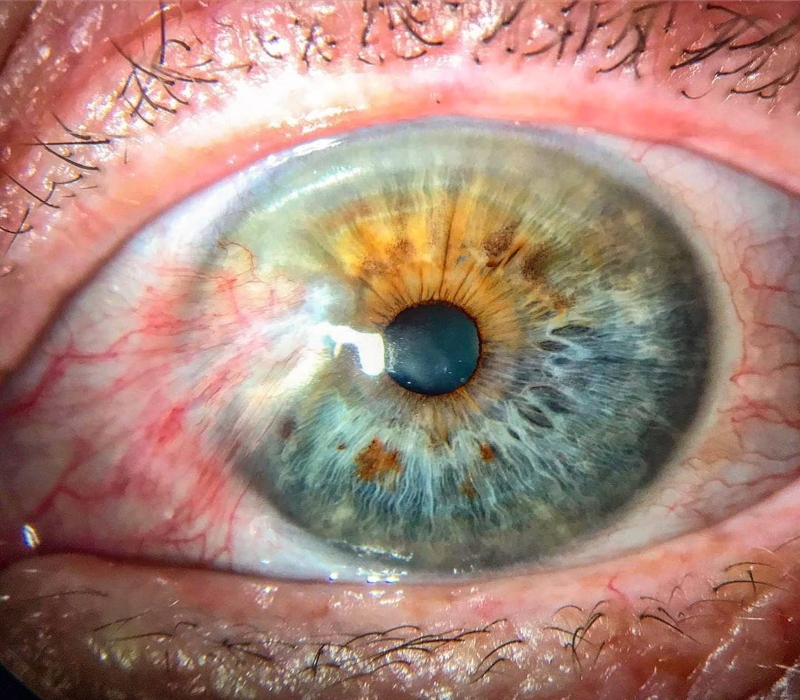 My Experience with Uveitis: by Darren

I woke up, and my life had changed forever. I did not how or to what extent it had changed, but I knew that my life would never be the same. That day I was late for my 7 AM history class, just like every other normal day of my junior year in a California high school. My right eye did not seem normal, something odd was happening. It felt as though there was some sort of pressure building up within my eye, and my vision was very cloudy. I hoped that it would clear up and the next day would be better. Later that afternoon my vision did not improve, if anything it had gotten a bit worse. I continued my day, and after classes went to cross country practice. As I ran I continued to test my vision…

Anterior uveitis typically presents as a unilateral, painful red eye. Patients may have tearing and photophobia. Slightly decreased visual acuity may be present as well. What does anterior uveitis look like on exam? The eye exam will show conjunctival injection, worse around the limbus, which is the area of the conjunctiva adjacent to the iris. This is called perilimbal injection or ciliary flush.

Current approach in diagnosis and management of anterior uveitis

Uveitis is composed of a diverse group of disease entities, which in total has been estimated to cause approximately 10% of blindness. Uveitis is broadly classified into anterior, intermediate, posterior and panuveitis based on the anatomical involvement of the eye. Anterior uveitis is, however, the commonest form of uveitis with varying incidences reported in worldwide literature. Anterior uveitis can be very benign to present with but often can lead to severe morbidity if not treated appropriately.

One synonym of uveitis is iritis, and although iritis is more technically and anatomically specific, clinicians often use the terms interchangeably. The most common form of this disease is nongranulomatous anterior uveitis, which can present as unilateral or bilateral; chronic or acute; and idiopathic, infectious, immunological or neoplastic. Classic symptoms include redness, photophobia and pain often described as dull ache; however, with chronic forms of the disease, these symptoms may be completely absent

Have you ever asked youself, “Which one is it, Uveitis or Iritis”?

The most commonly affected category of people is the young and middle aged. After the onset of the disease the aim is to control the inflammation and prevent any complications, since Iritis doesn’t have a direct cure.

Plenty of Symptoms, but Not Many Clues

There are countless causes of iritis, which is to say that no one can tell you why your eyes are on fire. I felt so sick we assumed I had a virus. But each week I thought I would be fine by the next. And so on. For two months I stayed in a dark room, unable to use my eyes.

My Experience with Uveitis: by Darren

As a ûknow it all” fifteen-year-old boy, I did not want to visit the doctor. However, as a student very interested in biology, I realized that eye problems, as with most health problems, could become more complicated if not treated early in development. Thus, my mother and I went to the ophthalmologist, concerned that I might have some sort of glaucoma or cataract. I was told that I had iritis. I remember thinking ûWhew, it was nothing major.”

If you’ve recently been diagnosed, “What is Iritis?”, is the number one question we get asked on Iritis.org.

Signs – ciliary flush (erythema that is worse closer to the iris, and not in the periphery as in conjunctivitis), pain relief with cyclolegics but not with topical anesthetics, and consensual photophobia (light in the unaffected eye, because it causes bilateral myosis, causes pain), and abnormal slit lamp exam with keratitic precipitates or hypopyon, and cells and flare in the anterior chamber, which scintillate for milliseconds at a time like ‘snowflakes in the car’s headlights’ when driving at night under an oblique slit lamp light.

Acute anterior uveitis, also known as iritis, is the inflammation of the anterior or posterior chamber and iris. It is not a true ocular emergency, and with proper treatment and follow-up, it has a good prognosis. Uveitis is subdivided into anterior and posterior components. The anterior tract is composed of the iris and ciliary body.