Where in health am I? : Home / Health Cloud / Challenges / Drugs & Medications / Substance Use Disorder / Opioids

Opium: that terrible truth serum. Dark secrets guarded for a lifetime can be divulged with carefree folly after a sip of the black smoke ― Roman Payne, The Wanderess 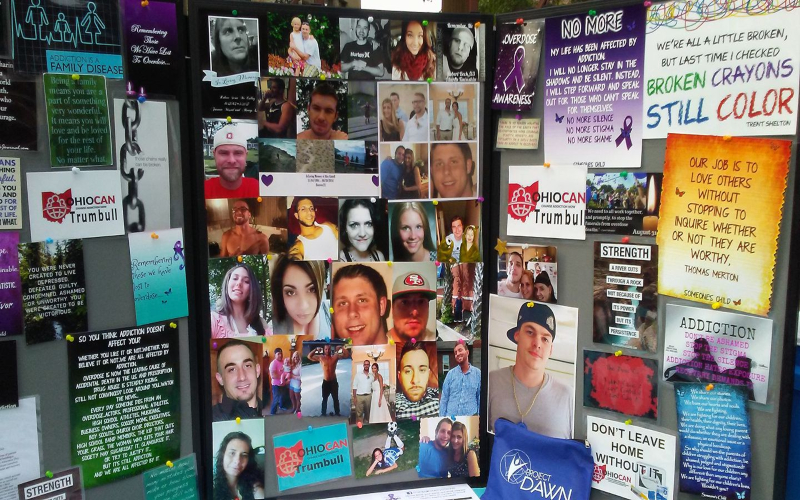 How your brain is wired to just say ‘yes’ to opioids

The mid-1980s was the era of cocaine and marijuana, when “Just Say No” was the centerpiece of the war on drugs and the government’s efforts to stem drug use and addiction. Since then, prescription opioids have become the nation’s drug scourge. The idea that mere willpower can fight this public health emergency is not only outdated, it’s scientifically misguided.

Thirty years ago, I was a research scientist focused on addiction when I was asked to co-author a volume on prescription narcotics…

“This isn’t just a story about rogue prescribers and pill mills,” says Caleb Alexander, co-Director of the Center for Drug Safety and Effectiveness at the Johns Hopkins School of Public Health. “A much broader swath of the medical profession is responsible for the oversupply of opioids in clinical practice.”

There’s a highly successful treatment for opioid addiction. But stigma is holding it back.

Medication-assisted treatment is often called the gold standard of addiction care. But much of the country has resisted it.

A Detox Drug Promises Miracles—If It Doesn't Kill You First

The heavy hallucinogen ibogaine is illegal in the US, but some addicts are flocking to Mexican clinics for it, hoping to be cured. A physician investigates.

An Opioid Addiction, and an Australian’s Battle to Survive

On the opposite end of the earth from America, where the opioid epidemic has left 400,000 dead, Australia is facing its own crisis of soaring opioid use and fatal overdoses. It has all unfolded despite the glaring warnings from the U.S., and despite more than a decade of warnings from Australian health professionals about a looming disaster.

Finally, proof: opioids are no better than other medications for some chronic pain

A first-of-its-kind study compared opioids to non-opioid drugs in patients with persistent back pain or hip or knee osteoarthritis. Its results are devastating.

How many Americans really misuse opioids? Why scientists still aren’t sure

Concoctions that contain opioids, such as “Sizzurp” (also known as “Lean” or “Purple Drank”), typically contain codeine cough syrup in a soft drink such as Sprite. Many users of this concoction likely deny codeine misuse. It’s difficult to determine whether estimates of U.S. opioid misuse are too high or too low. Accuracy of these statistics is important, as they guide research, prevention, harm reduction and policy.

Scientists Just Solved a Major Piece of the Opioid Puzzle

Scientists have identified four opioid receptors, which they've named mu, delta, kappa, and nociceptin. But drugs like fentanyl, heroin, morphine, and oxycodone are particularly fond of the mu opioid receptor. Which is a problem. Because while the mu receptor facilitates these drugs' analgesic properties, it's also responsible for their addictive and deadly side effects. The kappa opioid receptor doesn't appear to have that issue.

Opioid overdoses continue to increase, accounting for nearly two-thirds of all overdose deaths in the US, and a high percentage of those overdoses also include other drugs. A new study shows that the combination of opioids with one common class of drugs in particular is especially risky in the first 90 days of concurrent use. Those drugs are benzodiazepines (often called "benzos"), the class that includes alprazolam (Xanax), diazepam (Valium), and clonazepam (Klonopin), meds frequently prescribed to alleviate anxiety.

The Giants at the Heart of the Opioid Crisis

There are the Sacklers, the family that controls Purdue Pharma, the maker of OxyContin. There are the doctors who ran pill mills, and the rogue pharmacists who churned out opioid orders by the thousands.

The Opioid Reckoning Will Not Be Just

Opiate medications likewise serve as powerful tools to relieve suffering, and can very easily cause it. The drugs are analogues of heroin, the potent opiate that has long been almost universally synonymous with danger—with arrests, needles, rock bottom, death. But heroin has killed far fewer people than legal opioid pills in the past two decades. Of the more than 250,000 deaths in the United States from opioid-related overdoses, a minority involved heroin.

The Perilous Blessing of Opioids

An injured bioethicist learned firsthand how desperately patients with severe pain need the relief of powerful drugs—and how little support they get to stop taking them.

What Doctors Can Learn From the Dark Web

Opioid addicts are turning to online forums for advice about quitting. Their conversations have a lot to teach us about drug use and public health.

‘Benzo-dope’ may be replacing fentanyl: Dangerous substance turning up in unregulated opioids

The increasing availability of benzo-dope is cause for concern given that when taken together, the combined effects of benzodiazepines and opioids can result in overdose and death.

A Better Way to Approach Pain, and America's Pain-Pill Epidemic

How did we get here? The pain-relieving properties of opium have been known for thousands of years, but because of its dangerous side effects and addictive properties, it has generally been reserved for more severe forms of acute pain. This changed in the mid-'90s when doctors became more lax about prescribing opioids over a longer period of time.

Americans Have Been Addicted to Prescription Opiates Forever

OPIATES ARE AMAZING. They make dentistry not a horror movie, make a broken bone something you can tolerate while waiting in the ER, and kept your great-grandpop from going into shock after being shelled in the trenches of Ypres. Opiates are also amazingly addictive.

Discover the rewards of treating patients with Opioid Use Disorders

This consortium of major stakeholders and constituency groups with interests in safe and effective use of opioid medications offers extensive experience in training and colleague support in the treatment of substance use disorders and specifically, opioid dependence treatment, as well as experience in the interface of pain and opioid misuse.

Opioid prescriptions have dramatically escalated over the past few decades, a fact that has attracted significant media attention. With evidence-based medicine only becoming mainstream at the close of the 20th century, the science is still catching up on the long-term effects of opioids; older drugs like morphine have largely been grandfathered into modern medicine. Consequently, we’re still learning new things about this old class of drugs.

Consumer Reports commissioned a review of the research used to approve this opioid painkiller. The results may surprise you.

How Bad is the Opioid Epidemic?

The opioid epidemic has been called the worst drug crisis in American history. Death rates now rival those of AIDS during the 1990s, and with overdoses from heroin and other opioids now killing more than 27,000 people a year, the crisis has led to urgent calls for action. The epidemic didn’t happen overnight.

How Much Does It Hurt?

Zohydro is the new FDA-approved painkiller that some doctors think the FDA had no business approving. And in ERs across America, they’re anxiously awaiting the fallout.

Though opiates can offer pain relief and thus improving the quality of life for someone suffering from physical ailments, they can easily be abused. All types of opiates and opioids can be addictive, some with greater potential for addiction than others. When opiates are used recreationally or beyond their intended scope, an opiate addiction typically develops.

The death of Prince underscores the opioid abuse epidemic in America that is created by the over-prescribing of opioids to treat pain known by names like Percocet, OxyContin, Fentanyl and Vicodin.

Painkillers - The Drugging of GenerationRx

Prescription drugs bring relief from illness and pain BUT they come with a price...drug dependence and even death. Can we turn it around?

I certainly don’t have the perfect answers on how to handle our opiate over-prescription problem. But I think that cracking down without having far more open communication about addiction leaves determined addicts no better off than they were before and people in genuine pain hobbling around.

The Forgotten Drug of Abuse: How Junkies Grew Addicted to Talwin

One particularly fascinating drug saga I tracked through the archive was the rise and fall of a narcotic (pain reliever) named Talwin. Talwin debuted with much ballyhoo in 1967 as the first non-addictive narcotic -- a holy grail of sorts for pharmaceuticals, and a discovery preceded by decades of dashed dreams.

The New Drugging of America

The CDC reports that the relatively recent epidemic of opium-addiction is now America's fastest growing drug problem. The source of most of these opiates is not the foreign cartels, traffickers and drug dealers depicted in Hollywood movies; it is pharmacies fulfilling prescriptions written by often well-meaning doctors for Vicodin, Oxycontin, Oxycodone, and other opoid pain relievers.

The War Over Prescription Painkillers

There's no question that prescriptions for opioid painkillers like Oxycontin and Percocet have soared in recent years. It's also clear that there are some rogue doctors and "pill mills" who unscrupulously hand out prescriptions, sometimes to patients who shouldn't get them, sometimes to drug addicts and drug dealers pretending to be pain patients.

Taking opioids in combination with other central nervous system depressants—like benzodiazepines, alcohol, or xylazine—increases the risk of life-threatening overdose.

How your brain is wired to just say ‘yes’ to opioids

The mid-1980s was the era of cocaine and marijuana, when “Just Say No” was the centerpiece of the war on drugs and the government’s efforts to stem drug use and addiction. Since then, prescription opioids have become the nation’s drug scourge. The idea that mere willpower can fight this public health emergency is not only outdated, it’s scientifically misguided. Medical history tells us that almost as long as there have been opioids – their use dates back to the third century – there have been opioid addicts

Fentanyl may be hiding in the drugs you’re using. You won’t see it, smell it or taste it, but it can kill you. BE DRUG SMART. Don’t use alone. Start with a small amount. Learn about naloxone.

The need for finding an opiate addiction rehab or heroin detox center has never been higher. 100 people die every day in the United States due to an opiate-related overdose or one person every 15 minutes. While there is no overnight cure for this devastating problem, long-term opiate recovery is possible. Learning more about opiates, addiction and the rehabilitation process is the first step in getting help.

Our mission is to reduce morbidity and mortality resulting from prescribing of opioids and to promote cautious, safe and responsible opioid prescribing practices.

Many treatment centers provide replacement therapy for those suffering from opiate withdrawal. The methods of replacement therapy will differ slightly from one medication to the next but the general ideal is simple: Provide the patient with a medication that will cause their body to think that it is receiving opiates which will lead to fewer withdrawal symptoms and can help the detox process to run more smoothly.