Octopuses get friendlier on ecstasy, just like humans - Ephrat Livni 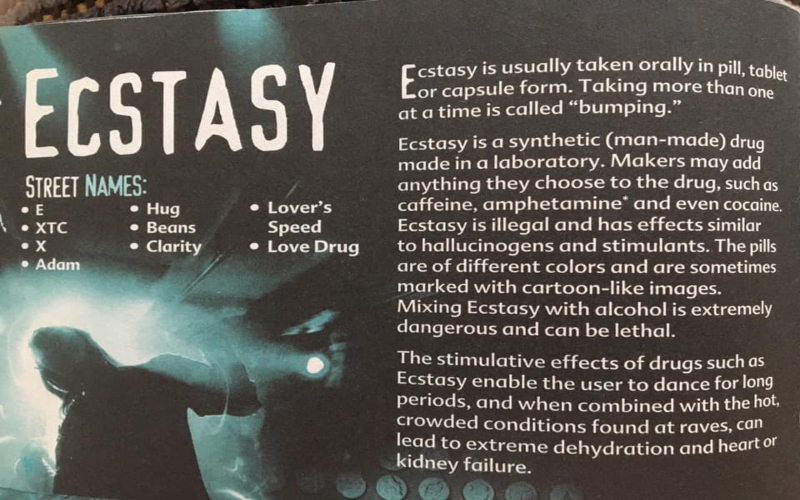 How does MDMA kill?

MDMA (Methylenedioxymethamphetamine), commonly referred to as ecstasy, was manufactured as a potential pharmaceutical early last century. It had some limited use in the 1970s as a therapeutic aid in trauma treatment and in relationship counselling, and more recent studies using MDMA for trauma have shown some promise.

Structurally, MDMA is similar to the stimulant methamphetamine and to the hallucinogen mescaline, and so has both stimulant and mildly hallucinogenic effects.

Most problems with recreational MDMA are acute. Dependence and other long-term problems are quite rare. Less than 1% of all drug treatment presentations are for ongoing problems with MDMA, such…

If you’ve ever seen someone in a club on MDMA, it may not surprise you to hear it’s linked to a heightened ability to share other people’s feelings and emotions. Yet in our new study, we found that even when the effects have faded, mild MDMA users showed greater empathy than people who use other common recreational drugs, such as cannabis, cocaine and ketamine.

MDMA, or Ecstasy, Shows Promise as a PTSD Treatment

You might not imagine humans have got a lot in common with octopuses. The bizarre, clever, gelatinous, shape-shifting creatures, with eight tentacles, three hearts, blue blood, and the ability to change colors and taste with their skin seem as close to space aliens as anything on Earth. Soak the solitary sea dwellers in a bath of the drug ecstasy and our commonalities become more apparent, according to new research

Study: Medical Ecstasy Makes People More Cooperative, But They Can Still Sniff Out A Rat

Since this research focused on therapeutic benefits of the drug, the results shouldn't be interpreted as an endorsement of recreational use.

Tastes Like Tesla: How Tesla Ecstasy Pills Became The Hot Way To Get High

The fact that tech logos are trending in the drug world is no surprise to Mitchell Gomez, executive director of DanceSafe, a non-profit supporting health and safety in the dance community. “The phenomenon of pills and blotters being made with corporate logos is one that dates back many, many years...

We’re Too Excited About MDMA’s Potential for Treating PTSD

Yes, the clinical outlook is promising. But we need to start getting just as serious about how the people who need the drug the most will access it.

MDMA was first synthesized by a German chemist in the early 20th century, and starting in the 1980s, was widely distributed in tablet form as a recreational drug called Ecstasy. (Users reported feeling a life-affirming sense of euphoria.) Molly is just Ecstasy with a different name, Owen and Gavin write, a marketing trick from “drug dealers rebranding a product that had gotten a bad reputation because it was so heavily cut with other substances.” Unlike Ecstasy, molly is geared to “discerning consumers who don’t mind paying a premium to ensure quality.” But, like Ecstasy before it, the capsules being sold as molly are rarely pure MDMA. Instead, they are often cut with any number of substances: aspirin, caffeine, bath salts, methamphetamine. Sometimes, molly contains no MDMA at all.

A recent spate of overdose deaths at dance-music parties has raised alarm about "Molly," an ostensibly pure form of the popular club drug ecstasy. But drug-enforcement officials say the moniker has become meaningless, as dealers increasingly sell a variety of potentially more dangerous drugs under its guise.

Ecstasy as a Remedy for PTSD? You Probably Have Some Questions.

No one goes home with a bottle of Ecstasy. If approved by the F.D.A., MDMA would only be administered by a licensed therapist. First, a patient goes through three sessions of psychotherapy. In the fourth session, the patient takes a pill.

How MDMA Went From Club Drug to ‘Breakthrough Therapy’

MDMA, aka ecstasy, will still be an illegal drug when Dr. Ross begins these sessions. But it’s emerging as one of the most promising treatments for intractable post-traumatic stress disorder.

Kim Kardashian West and ecstasy: A reminder of the social dangers of the drug

Kim unintentionally constructed a timely PSA which helps raise awareness of potential social harms that may result from use.

The Differences Between British and American MDMA Users

Ultimately, how Brits and Americans treat MDMA probably has something to do with their respective natures. Brits are as nihilistic with the drug as they are with alcohol, while – arguably – Americans generally put more brainpower into how they use their illicit substances. Think, for example, about how many more American weed nerds you've come across than British.

When Does Sex on MDMA Count as Rape?

And while the drugs most often labeled as date rape drugs are Rohypnol, GHB, and ketamine, festival-goers' drug of choice—or at least the one they talk about most on Instagram (other than alcohol)—is MDMA.

Will MDMA Show Up On a Drug Test?

How does MDMA kill?

Structurally, MDMA is similar to the stimulant methamphetamine and to the hallucinogen mescaline, and so has both stimulant and mildly hallucinogenic effects. Most problems with recreational MDMA are acute. Dependence and other long-term problems are quite rare. Less than 1% of all drug treatment presentations are for ongoing problems with MDMA, such as dependence.

RollSafe is concerned with public health and the safety of people. We do not endorse the acquisition and use of MDMA outside of approved medical settings. If you’re going to use MDMA anyway, please do your research.

DrugData.org is an independent laboratory pill testing program of Erowid Center. Launched in July 2001, its purpose is to collect, manage, review, and present laboratory pill testing results. The information is made publicly available to help harm-reduction efforts, medical personnel, and researchers. While some government agencies analyze pill contents, they choose to restrict the data they collect and make it private to law enforcement interests.

MDMA (3,4 methylenedioxymethamphetamine) is a synthetic, psychoactive drug chemically similar to the stimulant methamphetamine and the hallucinogen mescaline.

Some users say they take ecstasy because it lowers their inhibitions and relaxes them. MDMA is also said to increase awareness and feelings of pleasure and to give people energy. However, some people report side effects after taking MDMA such as headaches, chills, eye twitching, jaw clenching, blurred vision and nausea. Some doses of MDMA can cause dehydration, hyperthermia and seizures.

Erowid is a member-supported organization providing access to reliable, non-judgmental information about psychoactive plants and chemicals and related issues.