Where in health am I? : Home / Health Cloud / Challenges / Drugs & Medications / Substance Use Disorder / Benzodiazepines

“Mother’s little helpers” lack the glamour of other pills and denote dullness, forever associated as they are with the two largely invisible populations to which they are most heavily prescribed: the elderly poor and older housewives - Lily Lynch 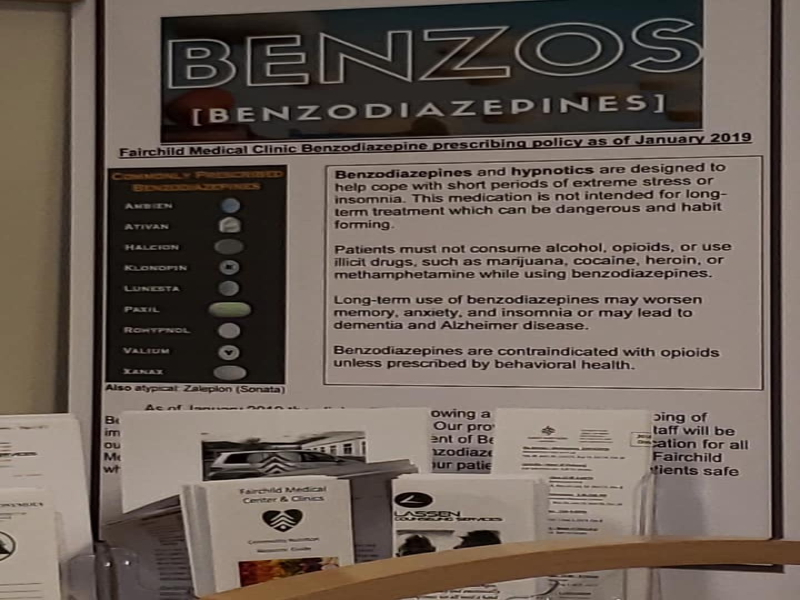 'Xanax' Nation? My Anti-Anxiety Meds Give Me Enough to Worry About

Journalists love declaring that psychiatric medications symbolize some slice of the zeitgeist.  So I can't say I was entirely surprised when I opened my mailbox the other day and saw New York magazine's cover article proclaiming that "If the 90s were the decade of Prozac, all hollow-eyed and depressed, then this is the era of Xanax, all jumpy and edgy and short of breath."

Translation: Depression is out, anxiety is in, antidepressants are passé (Statistics showing continued robust usage be damned) and anti-anxiety benzodiazepines, around since the 60s, are trendy again, the perfect no-commitment chill pills for a nation of "panicked strivers" contending with a new age of…

A Quiet Drug Problem Among the Elderly

Despite warnings from experts, older people are using more anti-anxiety and sleep medications, putting them at risk of serious side effects and even overdoses.

Benzodiazepines — commonly prescribed for anxiety, insomnia, seizures and panic disorders — are highly addictive and come with health risks, especially when combined with other drugs.

Korn's Jonathan Davis On Xanax Addiction: 'Benzos Are The Devil'

After giving up recreational drugs and alcohol almost 20 years ago, he’s continued to struggle with chronic and debilitating anxiety and depression — and consequently a reliance on prescription drugs. For the first time ever, Davis agreed to a detailed conversation about addiction, mental health and his family life.

Should Pregnant Women Take Anti-Anxiety Medication? Some Have No Choice.

The relentless focus on fetal purity was one of the hardest things I faced during my already tough pregnancy.

Opioid overdoses continue to increase, accounting for nearly two-thirds of all overdose deaths in the US, and a high percentage of those overdoses also include other drugs. A new study shows that the combination of opioids with one common class of drugs in particular is especially risky in the first 90 days of concurrent use. Those drugs are benzodiazepines (often called "benzos"), the class that includes alprazolam (Xanax), diazepam (Valium), and clonazepam (Klonopin), meds frequently prescribed to alleviate anxiety.

Cracking down on the legal supply is not a solution. In fact, it could spell disaster.

Where is my Xanax Rx? Why your doctor may be concerned about prescribing benzodiazepines

There has been increasing attention into long-term risks of benzodiazepines, including potential for addiction, overdose and cognitive impairment. The overdose death rate among patients receiving both benzodiazepines and opioids is 10 times higher than those only receiving opioids, and benzo misuse is a serious concern.

‘Benzo-dope’ may be replacing fentanyl: Dangerous substance turning up in unregulated opioids

The increasing availability of benzo-dope is cause for concern given that when taken together, the combined effects of benzodiazepines and opioids can result in overdose and death.

Xanax: how does it work and what are the side effects?

While it is the most frequently prescribed benzodiazepine in the US, Xanax is not available in the UK, but it can be obtained on private prescriptions and online. Recent data suggests that the UK is the second largest market for Xanax on the dark web, after the US. Its widespread availability on the internet has made the situation around this drug especially perilous.

Anxiety Meds Valium, Xanax And Ativan May Not Lead To Dementia After All

The connection between benzodiazepines and dementia has not been especially clear in recent years. Last year, a widely publicized study again found that benzodiazepines--Ativan, Valium, and Xanax--which are often used to treat anxiety and sleep problems, were linked to increased risk for Alzheimer’s disease in elderly people. This week, another study was published, finding that in the highest doses the same meds are not linked to any increased risk for dementia.

After a few terrifying experiences, I recognized that benzos were no longer treating my anxiety but had instead become an unhealthy habit.

You may have heard of the opioid painkiller epidemic over the past few years. As the story goes, doctors, driven by a misleading campaign from big pharma, prescribed a ridiculous amount of painkillers to Americans, getting patients hooked on the drugs. And overdoses have spiked as a result. Now it looks like something similar may have happened with yet another legal drug: benzodiazepines, such as Xanax and Valium.

How America learned to stop worrying about worrying and pop its pills instead.

Sleep And Anxiety Drugs May Increase Risk For Alzheimer's

Users of sleep and anxiety drugs may unknowingly be increasing their risk for developing Alzheimer's disease. A study published in the British Medical Journal says long-term use of benzodiazepines could result in up to a 50 percent increased risk of developing the memory-robbing disease. Benzodiazepines are prescribed for their anxiolytic and sedative properties and include well-known drugs such as Xanax, Ativan, and Valium.

More than 2,000 teens begin abusing prescription pills each day, according to the National Survey on Drug Use and Health -- making prescription pills the most common drugs teens use to get high after marijuana. According to new research, anti-anxiety and sleeping pills may carry an especially high risk of abuse, particularly among teens who have been prescribed these medications.

The Condition Many Recovering Addicts And Alcoholics Don't Know About

No one said recovery would be easy. And for the majority of addicts and alcoholics, detox is just the beginning.

If it turns out that Whitney was under the influence of Xanax (alprazolam), then there's a good chance she would be alive today if that drug had never been put on the market.

The problem with benzos, as they're also known, is that they're highly addictive medications, both physically and psychologically. Abruptly stopping them can lead to withdrawal symptoms...

When Xanax hit the U.S. market in 1981, it wasn't clear it would be a hit. It was a me-too successor to Valium, the anxiety drug that was the most popular drug in America for most of the 1970s. Maker Upjohn figured out a clever way to market its drug: by testing it to treat panic attacks as well as anxiety.

An Anxious History of Valium

What a drag it is getting old—or is it? Valium's heyday is long past, but it lives on as a cultural icon.

Taking opioids in combination with other central nervous system depressants—like benzodiazepines, alcohol, or xylazine—increases the risk of life-threatening overdose.

More People Are Taking Drugs for Anxiety and Insomnia, and Doctors Are Worried

As coronavirus health concerns, social isolation and job-loss stress take a toll, people turn to medications; ‘It can very quickly become a habit’

The drugs first burst onto the scene in the 1950s and '60s and quickly became known as "mother's little helper," the mild tranquilizer that could soothe frazzled housewives' nerves. More than four decades later, benzos — including Valium, Xanax, Klonopin and Ativan — are used to treat anxiety, mood disorders and insomnia.

While benzodiazepines are mostly prescribed for anxiety, insomnia and seizures, the study found that the biggest rise in prescriptions during this time period was for back pain and other types of chronic pain.

'Xanax' Nation? My Anti-Anxiety Meds Give Me Enough to Worry About

Journalists love declaring that psychiatric medications symbolize some slice of the zeitgeist. So I can't say I was entirely surprised when I opened my mailbox the other day and saw New York magazine's cover article proclaiming that "If the 90s were the decade of Prozac, all hollow-eyed and depressed, then this is the era of Xanax, all jumpy and edgy and short of breath."

BenzoBuddies: an inclusive, nonjudgmental mutual-support environment for those who wish to withdraw from benzodiazepines. Members of the BenzoBuddies community are encouraged to exchange ideas, information and support during the process of withdrawal and recovery. Although outside of the immediate scope of BenzoBuddies, members are free to discuss their wider medical problems and needs as they relate to benzodiazepine use and withdrawal.

Welcome to the Benzodiazepine Withdrawal Support Site. The benzodiazepine (benzos) drugs may be associated with side effects, tolerance, dependency, addiction, withdrawal symptoms and a protracted withdrawal syndrome. This site is a place to learn about these issues.

To provide support for those who suffer from social anxiety disorder (social phobia).