As a clinician in the emergency room, when I have a patient who has CHS, I ask them if they take a lot of hot showers, and the reaction is instantly like, 'how did you know - Cecilia Sorensen 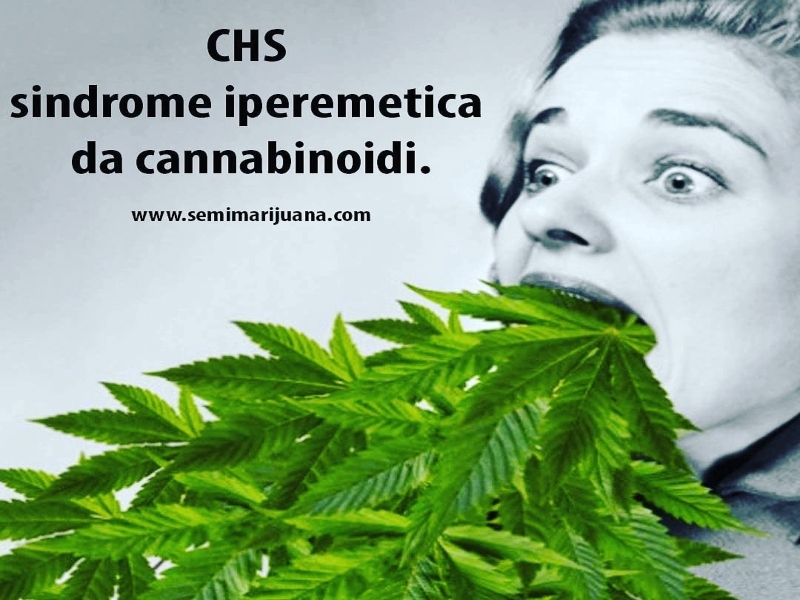 Weed isn't for everyone. Mind you, for most, the worst that could happen after a couple of tokes is that you'll feel mildly dizzy, throw up a bit on your shoes or potentially be exposed to a Ben Harper singalong.

However, for a very small number of regular users, there's a much more unpleasant consequence to contend with.

Cannabinoid Hyperemesis Syndrome—or "CHS"—is a condition associated with chronic cannabis abuse. Its three primary symptoms are nausea, abdominal pains and cyclical vomiting, an ailment where you retch or throw up far more often than you should (around six to 12 times an hour). So not really the desired effects when you've just spent £10 ($15) on a gram of…

Previously reserved for agitated patients, haloperidol has been used off-label for postoperative nausea and has been often used successfully to treat CHS.

"The munchies” is a common term familiar to both casual and chronic marijuana users that amusingly describes the appetite-stimulating effect of cannabinoids. In medicine, this effect is desired and often therapeutic in patients experiencing nausea and vomiting from chemotherapy or loss of appetite from a chronic disease. Paradoxically, as recreational cannabinoid use continues to increase, so too does a relatively new phenomenon known as Cannabinoid Hyperemesis Syndrome (CHS), which can be thought of as “the anti-munchies.”

In the article entitled Cannabis Hyperemesis Syndrome in Palliative Care: A Case Study and Narrative Review, Dr Howard reported that the patient stopped using inhaled concentrated cannabis extracts, but continued to use oral whole plant-based edible cannabis, which eliminated the cannabis hyperemesis syndrome while sustaining the beneficial effects on other symptoms.

Although previously assumed to be very rare, CHS may affect a large number of frequent marijuana users, a new study suggests.

A Perplexing Marijuana Side Effect Relieved by Hot Showers

By the time Thomas Hodorowski made the connection between his marijuana habit and the bouts of pain and vomiting that left him incapacitated every few weeks, he had been to the emergency room dozens of times, tried anti-nausea drugs, anti-anxiety medications and antidepressants, endured an upper endoscopy procedure and two colonoscopies, seen a psychiatrist and had his appendix and gallbladder removed. The only way to get relief for the nausea and pain was to take a hot shower.

Cannabinoid Hyperemesis Syndrome: What you need to know

Doctors think that the availability of cannabis with stronger concentrations of THC may be behind the prevalence of the disease. Anti-nausea medicines do not seem to have much effect, but one of the telltale signs of CHS is that frequent hot showers can bring relief. Still, one can only spend so much time in a hot shower, and doing so could lead to further dehydration for those who already have been vomiting.

But there's got to be a better way.

Rare And Mysterious Vomiting Illness Linked To Heavy Marijuana Use

Doctors say it's difficult to treat the condition. There is no cure other than to quit using marijuana, and many patients are skeptical that cannabis is making them sick, so they keep using it and their vomiting episodes continue. Doctors can do little to relieve the symptoms, since traditional anti-nausea medications often don't work and there are no pills to prevent the onset of an episode. Patients may need intravenous hydration and hospital stays until the symptoms subside. "That's really frustrating as an emergency physician," says Moulin. "I really like to make people feel better."

Why marijuana, a drug sometimes used to fight nausea, should in some people produce cannabinoid hyperemesis (as the pot smoker’s vomiting syndrome was called) is not clear. Cannabinoids have been shown to slow down the gut. One theory is that too much cannabinoid in the system slows it down too much, leading to nausea and vomiting. Oddly, virtually all the people who experience the nausea feel much better while they are taking a hot shower.

When Cannabis Makes You Projectile Vomit

This phenomenon appears to be on the rise—and research suggests an improbable treatment involving hot sauce helps.

Cyclic vomiting syndrome is on the rise among adults, and marijuana use may be partially to blame.

Weed isn't for everyone. Mind you, for most, the worst that could happen after a couple of tokes is that you'll feel mildly dizzy, throw up a bit on your shoes or potentially be exposed to a Ben Harper singalong. However, for a very small number of regular users, there's a much more unpleasant consequence to contend with. Its three primary symptoms are nausea, abdominal pains and cyclical vomiting, an ailment where you retch or throw up far more often than you should (around six to 12 times an hour).

Multiple case reports are now finding that haloperidol has significant antiemetic effects on CHS patients in both the ED and outpatient settings.

Widespread availability, low cost, low adverse effect profile and ability to reduce nausea at 60 minutes are all factors that favor the use of capsaicin cream in the treatment of patients with CHS. Although not statistically significant, there were trends toward higher proportion of patients with complete nausea relief, overall rates of vomiting and need for rescue medications again favoring the capsaicin arm. Due to this study being underpowered, major conclusions cannot be drawn however this pilot trial provides direction for planning larger scale, adequately powered, clinical trials on this topic.

Trick of the Trade: Topical Treatment of Cannabinoid Hyperemesis Syndrome

Topical capsaicin cream binds to TRPV1 receptors with high specificity, impairing substance P signaling, much like a hot shower. In multiple case series and reports, capsaicin cream used in the ED was found to provide adequate relief of symptoms...