Aspirin is a popular drug for people who’ve never had a heart attack or stroke and would like to keep it that way. But for more than one in 10 people who do so, aspirin could do more harm than good - Journal American College of Cardiology 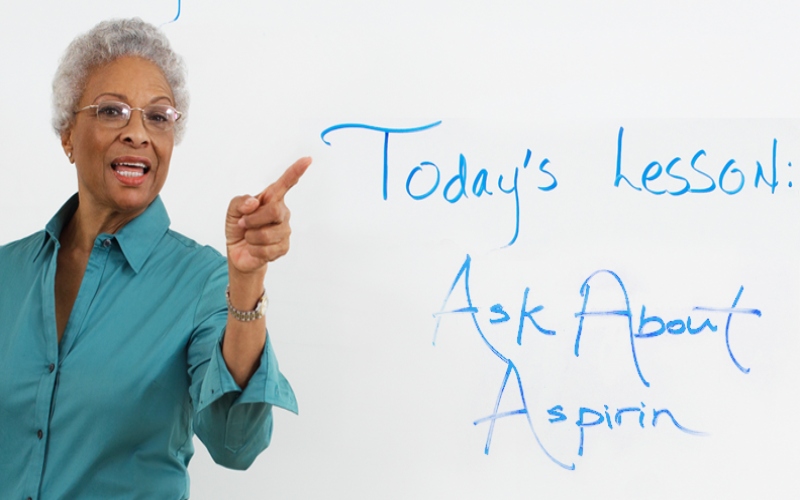 An aspirin a day has long been been touted as one of the pillars of a healthy routine for older people: Swallow the pill and see your risks of heart disease and cancer melt away.

But the findings of a large, randomized controlled trial has just been published in three papers in the New England Journal of Medicine. Together, they show a baby aspirin a day in people 65 years and older actually increased the risk of death — mainly from cancer — and that the pill does not drive down rates of heart disease, disability, or dementia.

The trial, led by John McNeil of Australia’s Monash University, involved more than 19,000 people, mostly age 70 and older, in Australia and the US. The…

The side effects are not worth the potential benefits, especially for older adults.

Aspirin Use to Prevent 1st Heart Attack or Stroke Should Be Curtailed, U.S. Panel Says

Adults at high risk for cardiovascular disease may face serious side effects if they start a daily regimen of low-dose aspirin.

Bleeding risks for adults in their 60s and up who haven't had a heart attack or stroke outweigh any potential benefits from aspirin, the U.S. Preventive Services Task Force said in its draft guidance.

An Aspirin A Day May Not Keep The Doctor Away

The benefit of a daily aspirin for individuals that have already had a heart attack or stroke is well documented, reducing the chance of a second heart attack, stroke or death. But therapeutically, there is no free lunch.

Doctors should use newer medications rather than aspirin to treat a common heart problem, say new guidelines for the NHS in England and Wales. The National Institute of Health and Care Excellence says blood-thinning drugs like warfarin are better for those with atrial fibrillation, which can increase a person's risk of stroke.

Aspirin Flops Big Time In Heart Study. Is It R.I.P For ASA?

So, is it time to toss the pills? Some will, but there are a few factors that suggest that the final story may not have been told.

Aspirin for Reducing Your Risk of Heart Attack and Stroke: Know the Facts

The Drug Facts label also gives directions that will help you use the aspirin so that it is safe and effective. But what about using aspirin for a different use, time period, or in a manner that is not listed on the label? For example, using aspirin to lower the risk of heart attack and clot-related strokes. In these cases, the labeling information is not there to help you with how to choose and how to use the medicine safely. Since you don't have the labeling directions to help you, you need the medical knowledge of your doctor, nurse practitioner or other health professional.

Aspirin to Prevent a First Heart Attack or Stroke

Aspirin works to reduce events among patients who have a higher likelihood of having an event, and there remains an argument for aspirin in patients who are at exceptionally high risk but who have not yet had a heart attack or a stroke. This has led to some controversy in this issue, and varying interpretations...

Daily Aspirin Is Most Beneficial in Your 50s, Panel Says

People in their 50s or 60s may benefit from taking aspirin daily, but those who start during their 50s get the most benefit from its use in preventing a heart attack, stroke and colon cancer, according to new recommendations from a government-appointed panel of independent experts.

Low-Dose Aspirin Late in Life? Healthy People May Not Need It

Taking it did not lower their risks of cardiovascular disease, dementia or disability. And it increased the risk of significant bleeding in the digestive tract, brain or other sites that required transfusions or admission to the hospital.

Low-Dose Aspirin Late in Life? Healthy People May Not Need It

Taking it did not lower their risks of cardiovascular disease, dementia or disability. And it increased the risk of significant bleeding in the digestive tract, brain or other sites that required transfusions or admission to the hospital.

Today, when people ask me about aspirin, my answer is different than it was last week. If you are healthy, there seems little to gain – and a fair amount to lose. Baby aspirin for healthy older adults is no longer a toss-up – for those people it is time to toss out the aspirin.

Who Should Take Aspirin Every Day?

A new study found that the risks apparently outweigh the benefits of taking a low-dose aspirin every day for otherwise healthy older people. But what about everyone else?

If you've never had a heart attack, you probably shouldn't be taking it.

A study found there were no benefits for healthy elderly adults in taking aspirin daily, and lots of potential risks.

Are you a candidate for daily aspirin?

Some doctors recommend that all people aged 45-50 should consider taking a daily low dose of aspirin until the age of about 75. But, discuss the pros and cons and your own circumstances with your GP before taking regular aspirin or clopidogrel.