Where in health am I? : Home / Health Cloud / Challenges / Infections / Viruses / Smallpox

I hope that some day the practice of producing cowpox in human beings will spread over the world - when that day comes, there will be no more smallpox - Edward Jenner 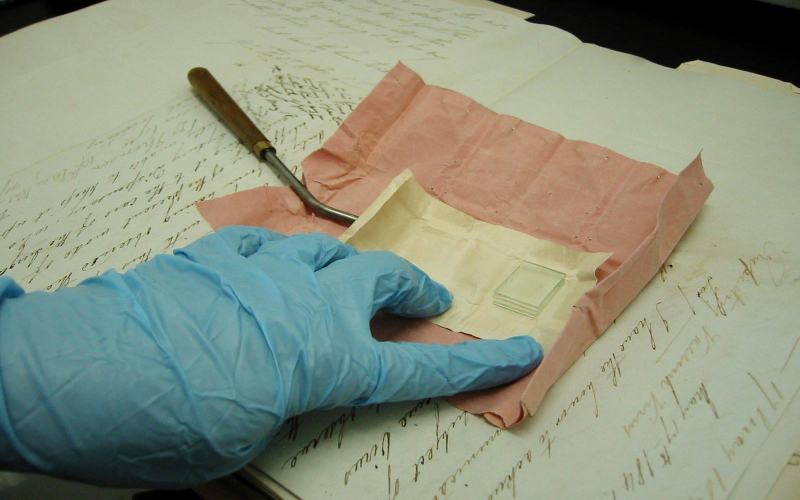 I never really knew smallpox but for many people around the world during the 1960's and 70's, the word smallpox inspired fear. It led to death and serious illnesses, and for some survivors, blindness or disfiguring scars that lasted a lifetime.

For me, thinking about smallpox eradication brings back a childhood memory of my dad being away for three months in Bangladesh as a "smallpox warrior". A pediatrician, epidemiologist, and vaccine researcher, he spent August to October 1975 in Rajshahi District of Bangladesh organizing surveillance for cases of "variola major" - the deadliest form of smallpox - and the immunization campaigns required to contain it and snuff it out.

Be thankful you were born after the smallpox vaccine

The anniversary of smallpox eradication is a good time for some vaccine appreciation.

Civil War vaccination kits, discovered in a drawer, yield genetic clues to how smallpox was defeated

As the world anxiously pins its hopes on vaccines to halt the coronavirus pandemic, scientists are still learning from the first global scourge to be eradicated by vaccination. Ancient-DNA sleuths analyzing Civil War-era artifacts with 21st-century sequencing techniques have recreated five genomes of viral vaccines mustered to fight smallpox in the 1860s, finding they were quite different from those used a century later to finally wipe out the disease.

Drug to Treat Smallpox Approved by F.D.A., a Move Against Bioterrorism

The Food and Drug Administration on Friday approved the first drug intended to treat smallpox — a move that could halt a lethal pandemic if the virus were to be released as a terrorist bioweapon or through a laboratory accident. The antiviral pill, tecovirimat, also known as Tpoxx, has never been tested in humans with smallpox because the disease was declared eradicated in 1980, three years after the last known case. But it was very effective at protecting animals deliberately infected with monkeypox and rabbitpox, two related diseases that can be lethal.

Epidemics are nothing new, of course. And some widespread infectious dieseases have profoundly changed the course of human history. Five hundred years ago, in February of 1519, the Spaniard Hernán Cortés set sail from Cuba to explore and colonize Aztec civilization in the Mexican interior. Within just two years, Aztec ruler Montezuma was dead, the capital city of Tenochtitlan was captured and Cortés had claimed the Aztec empire for Spain. Spanish weaponry and tactics played a role, but most of the destruction was wrought by epidemics of European diseases.

Scientists debate the dangers of a new plague emerging from permafrost thaws.

Should humankind hold on to the live virus to conduct research on treatments, tests and vaccines in case smallpox were to reemerge? Or is it more prudent to destroy all samples of the live virus to avoid any accidental or intentional release and instead rely on sequenced gene fragments for further research?

Synthetic Biology Could Bring a Pox on Us All

New methods are making it easier than ever to produce life-saving vaccines—and life-taking viruses that humanity is not prepared to fight.

What the world learned in eradicating smallpox: Unity mattered

Forty years ago, the world celebrated the vanquishing of a formidable foe, smallpox, which had maimed and killed millions for centuries. On May 8, 1980, the World Health Organization declared that smallpox had been eradicated. That milestone, reached while the Cold War still raged, is an example of what the public health world can achieve when it works together — and is particularly resonant in the midst of the coronavirus pandemic. The campaign against smallpox took 21 years and required not just vaccinations but tracking and isolating new cases.

What's The Real Story About The Milkmaid And The Smallpox Vaccine?

Once upon a time, a long time ago, there was a beautiful milkmaid. Her face was flawless, her complexion peaches and cream, her smile confident as she bragged, "I shall never have smallpox for I have had cowpox. I shall never have an ugly pockmarked face." A 13-year-old orphan boy heard the milkmaid's boastful declaration of immunity — or so the story goes. The boy was Edward Jenner, an apprentice to a country surgeon. Jenner's name would one day be famous for developing the world's first vaccine, which would eventually rid the earth of the scourge of smallpox. And the story of his boyhood inspiration for developing the vaccine is a classic of medical history, told in an 1837 biography and repeated endlessly over the years.

You have to pity Edward Jenner. He develops a vaccination for smallpox, saves countless lives in the process and eradicates one of the greatest scourges of humanity, yet is often accused of conducting unethical experiments.

The Rise and Fall of Smallpox

On May 8, 1980, the World Health Organization officially pronounced victory in the fight against smallpox, confirming that no known cases of the dreaded killer existed anywhere on the planet. Today, guarded laboratories in Atlanta and Moscow hold the only known stores of the virus. Some experts say these should be destroyed, whereas others believe they should be kept around for research purposes just in case smallpox somehow remerges.

The World Health Organization declared smallpox eradicated in 1980, but two stockpiles remain in high-security labs, one in the United States and the other in Russia. Scientists have been arguing over keeping or eradicating these stocks for years.

Plaguing the world since ancient times, smallpox brought down powerful rulers like Pharaoh Ramses V and has been credited with aiding the fall of Rome and the Spanish conquest of the Aztec Empire. It also led us to discover vaccination. By 1861, the year in which the Civil War broke out, the Western world had been vaccinating against smallpox for over half a century.

Frozen mummies and envelopes of scabs could contain remnants of one of history's most prolific killers.

Why a century-old battle over vaccination continues to rage.

For years there have been warnings that advances in science could make it possible to cook up killer diseases in laboratories and unleash them on the world. This week came news that scientists at the University of Alberta have put together from scratch a relative of the smallpox virus — and a reminder that the threat of deadly viruses created by humans is more than theoretical. The smallpox virus, which triggered brutal disease for centuries, was declared eradicated in 1980 after a successful global effort to end its reign of terror. But some scientists fear that it could be revived through what’s known as synthetic biology — the ability to make a virus by putting together by the recipe outlined in its genetic code.

Smallpox Could Again Be a Serious Threat

An estimated 300 million people died from smallpox in the 20th century alone. This virulent disease, which kills a third of those it infects, is known to have co-existed with human beings for thousands of years. As the world's population grew, and travel increased, so the virus that Edward Jenner called the "speckled monster" grasped every opportunity to colonise the world.

It only took 181 years to eradicate smallpox once we had a way to inoculate against it. That cocktail was the first successful vaccine, and the basis for most future immunizations. And we're still not really sure what was in it.

The oft mentioned lie smallpox vaccination saved millions and eliminated smallpox is a very important lie that justifies all sorts of vaccine and drug horrors along with the general failure of Allopathy to cure anything.

There are lots of arguments for destroying the virus, which would eliminate the chance it could escape and possibly ravage billions of unvaccinated people. But there are also reasons that the WHO keeps punting, some officially spoken, some not.

I never really knew smallpox but for many people around the world during the 1960's and 70's, the word smallpox inspired fear. It led to death and serious illnesses, and for some survivors, blindness or disfiguring scars that lasted a lifetime.

Smallpox outbreaks have occurred from time to time for thousands of years, but the disease is now eradicated after a successful worldwide vaccination program. The last case of smallpox in the United States was in 1949. The last naturally occurring case in the world was in Somalia in 1977. After the disease was eliminated from the world, routine vaccination against smallpox among the general public was stopped because it was no longer necessary for prevention.

Smallpox is a contagious, disfiguring and often deadly disease that has affected humans for thousands of years. Naturally occurring smallpox was eradicated worldwide by 1980 the result of an unprecedented global immunization campaign. Samples of smallpox virus have been kept for research purposes. This has led to concerns that smallpox could someday be used as a biological warfare agent. No cure or treatment for smallpox exists. A vaccine can prevent smallpox, but the risk of the vaccine's side effects is too high to justify routine vaccination for people at low risk of exposure to the smallpox virus.

Smallpox is an infectious disease of the past that was eliminated by vaccination. The disease was caused by the variola virus, which spread from person to person. Affected people became very ill with a high fever and a characteristic rash. Up to one-third of people with smallpox died.

Smallpox is a disease caused by the Variola major virus. Some experts say that over the centuries it has killed more people than all other infectious diseases combined. Worldwide immunization stopped the spread of smallpox three decades ago. The last case was reported in 1977. Two research labs still keep small amounts of the virus. Experts fear bioterrorists could use the virus to spread disease.

Smallpox has now been eradicated but ongoing interest in this disease lies both in the success of the eradication programme and in its potential as a biological weapon. Smallpox used to be a common cause of morbidity and mortality worldwide and is a viral haemorrhagic fever caused by the variola virus which belongs to the same genus as cowpox, monkeypox, orf and molluscum contagiosum.

You've probably heard about smallpox in the news over the past few years. You might be wondering what it is and whether you should worry about it. There can be a lot of hype about this disease, so it helps to learn the facts.

The last known natural case was in Somalia in 1977. Since then, the only known cases were caused by a laboratory accident in 1978 in Birmingham, England, which killed one person and caused a limited outbreak.