Where in health am I? : Home / Health Cloud / Challenges / Infections / Viruses / Enteroviruses / Polio

Unfortunately, pockets of polio transmission provide reservoirs for resurgence at any time, with even one traveller able to bring polio back to a polio-free country - Melinda Suchard 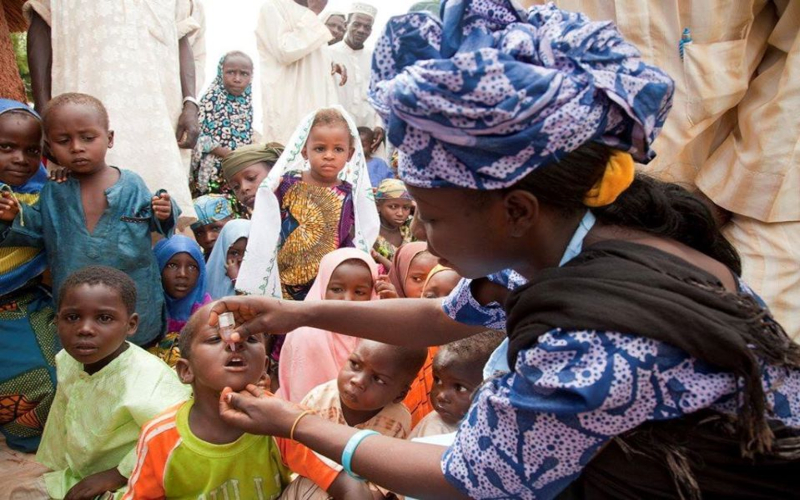 A mutated virus, anti-vaxxers and a vulnerable population: how polio returned to the US

Polio’s return to the US resulted from the confluence of a complicated set of scientific and societal factors that allowed a mutated version of the virus to start circulating in a susceptible community. This is the story of a life-saving vaccine with an unfortunate loophole that produced that version of the virus, and a calculated anti-vaccine campaign that created a vulnerable population.

Why eradicating polio everywhere has been so hard to crack

Polio is targeted to be the second human disease ever eradicated through vaccination. Smallpox was the first success story in 1974. Other diseases, like measles, wait in the wings to be selected for third place. Eradication initiatives are too labour intensive for the world to commit to more than one at any given time.

Is Polio Making a Comeback?

COVID-19. Monkeypox. And now, the reemergence of polio. It may seem as if the onset of a new disease outbreak lurks at every turn. With scientists finding polio in New York City wastewater...

To eradicate polio, more than 95% of a population needs to be immunized. WHO and partners have long relied on oral polio vaccines because they are cheap and can be easily administered, requiring only two drops per dose. Western countries use a more expensive injectable polio vaccine that contains an inactivated virus incapable of causing polio.

Striving to outrace polio: What's it like living with the disease

When Dentler considers the current polio outbreak in New York State, she says it's completely preventable. For her, it boils down to a single word — immunization.

With polio on the rise, we need to remember the risks

I have spent the past three years researching a book about a disease I thought of as “dead.” That disease is polio, the same disease that is now the cause of a state of emergency in New York State and that the World Health Organization has declared to be “circulating” in the United States. It is imperative that we recall something we have collectively forgotten: the consequences of this devastating disease.

A vaccine we don’t even use anymore is a reason polio keeps spreading — yes, really

A vaccine we don’t even use anymore is a reason polio keeps spreading — yes, really.

Are We on the Verge of a Polio-Free Africa?

With all of the news about Ebola’s rapid, dispiriting spread through West Africa, you may have missed an encouraging public health development: The continent appears tantalizingly close to fully eradicating polio, once one of the world’s most feared and destructive diseases.

Bill Gates Is Both Chief Funder And Fundraiser In Polio Fight

Gates is recognized around the globe as one of the greatest entrepreneurs in history. Since jointly taking the helm of the Foundation with Melinda Gates, they have proven to be among the world’s great social entrepreneurs, actively leading efforts to solve some of our most intractable problems.

How Good Is the Polio Vaccine?

Ever since the dramatic proclamation of the Salk vaccine, Americans have been asking, What will this do for my child? Can I trust it? These are the questions which Dr. Rustein sets out to answer.

He didn’t patent his vaccine, but that doesn’t mean others shouldn’t.

One strain of the virus that causes polio has likely been eradicated worldwide, according to a new report. The possible eradication of the poliovirus type 3 would be a "historic milestone" for global polio eradication efforts...

Polio’s Return After Near Eradication Prompts a Global Health Warning

Just two years ago — after a 25-year campaign that vaccinated billions of children — the paralyzing virus was near eradication; now health officials say that goal could evaporate if swift action is not taken. Pakistan, Syria and Cameroon have recently allowed the virus to spread — to Afghanistan, Iraq and Equatorial Guinea, respectively — and should take extraordinary measures to stop it, the health organization said.

The Political Fight Against Polio

This month, we’re moving deeper into polio’s “high season,” which, in much of the world, stretches from May until August. If the geography of polio mirrors that of conflict, then the challenge of eradication is, inevitably, as much political and diplomatic as it is epidemiological. And that’s where the plot gets messy.

If you have ever visited any of the places where polio remains or has recently been a threat, you have likely witnessed firsthand the disease’s human toll. I have. I’m referring to the polio survivors, the children — and the adults infected as children — with their withered, paralyzed limbs, eking out a grim existence on the streets with scant hope of anything better. But at the same time — on the same streets — I have also experienced the humbling feeling of joy and satisfaction that washes over you when you place two drops of oral polio vaccine into a little child’s mouth.

Public health organizations around the world have been fighting for global eradication of polio since 1988. Through massive vaccination efforts, the incidence of polio has gone down 99% since then, with the virus eradicated from most of the countries on Earth. But there have been many setbacks.

The World Is Still Battling Polio. What That Warning Means for Covid-19\

Decades of work brought the world close to ending polio, but misinformation, religious beliefs and economic grievances have fueled resistance to inoculations. The coronavirus pandemic added more delays. The struggle of one of the world’s largest vaccination campaigns offers a warning for the fight against Covid-19.

WHO just declared another polio virus strain eradicated. There’s one more to go.

Once a leading killer of children, polio has nearly been wiped out by a global vaccination effort.

Inching closer to a world without polio

The taming of polio and the challenge of the flu

The now nearly global eradication of polio through vaccination is a testimonial to the enlightenment of humans dedicated to the alleviation of human disease. In the early 20th century, hundreds of thousands of people are estimated to have been paralysed by polio annually. Even Franklin Delano Roosevelt was diagnosed with polio in 1921 — more than a decade before he became president of the United States. Although some Canadian families may wrestle with the benefits and potential secondary reactions to vaccination, today polio is eradicated in Canada because of the past widespread acceptance of vaccination.

Two Strains of Polio Are Gone, but the End of the Disease Is Still Far Off

Only polio virus Type 1 persists, and only in Pakistan and Afghanistan. But now mutant vaccine viruses are paralyzing some unvaccinated children.

In 1988 polio was endemic in 125 countries and there were more than 350,000 cases a year. Besides Nigeria, the only countries still confronting polio now are Pakistan and Afghanistan, with 33 reported cases between them in 2018. Nigeria’s race to polio eradication has been long and winding, hampered by at least four kinds of obstacles, some of them of the country’s own making.

A mutated virus, anti-vaxxers and a vulnerable population: how polio returned to the US

The poliovirus found in New York is not the same virus that once ripped through urban communities. Thanks to vaccination, that original, “wild” poliovirus has been eliminated from all but two countries: Pakistan and Afghanistan. But paradoxically, most polio cases that emerge nowadays – including the one infecting the man from Rockland – are derived from the vaccine itself.

Polio has been reduced by 99%. We are closer than ever to ending this crippling disease forever. Join Rotary on World Polio Day for a live global update on polio eradication.

There are approximately one million individuals in the U. S. who survived the great polio epidemics of the 1940s and 50s. While most polio survivors recovered a high degree of function, a great number were left with permanent, severe paralysis. The Polio Survivors Association was formed in 1975 as a 501(c)(3) non-profit corporation to promote the well being and improve the quality of life for these severely disabled polio survivors.

PolioToday.org is published by the Salk Institute for Biological Studies. This website is designed to raise awareness of post-polio syndrome and to be a resource for polio survivors. Dr. Jonas Salk, who developed the first safe and effective polio vaccine, founded the Salk Institute in 1960.

The British Polio Fellowship is a charity dedicated to helping, supporting and empowering approximately 120,000 people in the UK living with the late effects of Polio and Post Polio Syndrome (PPS), a neurological condition. It provides information, welfare and support to those living with the effects to enable all to live full independent and integrated lives.

The European Polio Union (EPU) is a European umbrella organisation for national organisations that support people who have had polio and for people that are currently coping with Post Polio Syndrome (PPS). The EPU aims, by bringing all those organisations together, to strengthen their force, to learn from each other and to help each other.

Polio Australia is committed to standardising quality polio information and service provision across Australia for polio survivors. Polio Australia’s Vision is that all polio survivors in Australia have access to appropriate health care and the support required to maintain independence and make informed lifestyle choices.

Post-Polio Health International's mission is to enhance the lives and independence of polio survivors and home ventilator users through Education, Advocacy, Research and Networking.

Polio eradication is a top priority of the Bill & Melinda Gates Foundation. As a major supporter of the GPEI, we contribute technical and financial resources to our GPEI partners to accelerate efforts to eradicate polio.

Polio is a crippling and potentially fatal infectious disease. There is no cure, but there are safe and effective vaccines. Therefore, the strategy to eradicate polio is based on preventing infection by immunizing every child to stop transmission and ultimately make the world polio free.

Post-polio syndrome (PPS) is the onset of new deterioration in function that may occur many years after recovery from acute poliomyelitis. PPS comprises various possible symptoms such as fatigue, weakness, joint and muscle pain, reduced respiratory function or dysphagia. PPS does not necessarily imply progressive deterioration, and can be helped by treatment. Management requires careful assessment and a multidisciplinary approach.

Polio Survivors in the 21st Century

The sole purpose of this site is to support worldwide polio survivors and anyone interested in.

Once polio is eradicated, the world can celebrate the delivery of a major global public good that will benefit all people equally, no matter where they live. Economic modelling has found that the eradication of polio would save at least US$ 40–50 billion over the next 20 years, mostly in low-income countries. Most importantly, success will mean that no child will ever again suffer the terrible effects of lifelong polio-paralysis.

Polio is a crippling and potentially fatal infectious disease. There is no cure, but there are safe and effective vaccines. The strategy to eradicate polio is therefore based on preventing infection by immunizing every child until transmission stops and the world is polio-free.