When the NHS COVID-19 app was launched in September 2020, few could have predicted that it would be responsible for what is now being called the “pingdemic” - Molly Lipson 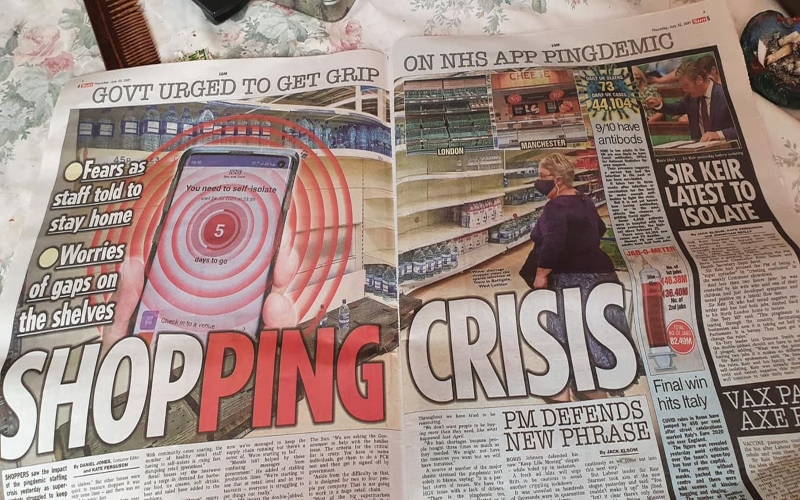 England’s ‘pingdemic’ is a convenient distraction from the real problem

We’re now in the full looking-glass stage of the pandemic, where things seem entirely back to front and solutions are treated as problems. The “ping” of the NHS test-and-trace app has been widely criticised as the cause of disruption for businesses, workers and supply chains. But our problem isn’t a “pingdemic”. A ping simply tells you that you have been in contact with someone who is infected and allows you to do something about it. The problem is the high rate of infection that greatly increases the chances that you will have been in contact with someone who has tested positive – and therefore that you might have Covid too.

Luke Pollard, shadow environment secretary, said security of the food supply is fundamental and empty shelves “show the system is failing”. “The government caused this chaos by recklessly releasing all restrictions at once in the face of the Johnson variant, hitting the accelerator while flinging off the seatbelt,” he said.

Growth in Britain’s dominant services sector has slowed to its weakest since March after businesses were hit last month by a triple whammy of bottlenecks, workers self-isolating and a less generous tax break for homebuyers.

Is the UK’s pingdemic good or bad? Yes.

A covid surge was meant to be the moment that digital contact tracing apps finally came into their own. So why are so many Britons turning sour on the technology?

The ‘pingdemic’: How UK's Covid-19 app has created a health headache

Notifications from the UK's official Covid-19 application have increased in recent weeks. A mere 600,000 people received a ‘ping’ this week to alert them that they had been in close contact with someone who had tested positive and they needed to self-isolate for 10 days. Such is the detrimental effect on people’s working life that many are choosing to deactivate it.

What’s a ‘Pingdemic’ and Why Is the U.K. Having One?

July 19 was meant to mark the end of pandemic lockdown restrictions in England, as progress continued in vaccinating people against Covid-19. But just as the country relaxed most restrictions, it was still dealing with a third wave of coronavirus infections as the highly contagious delta variant spread across the U.K. A record number of people who had come into contact with an infected person were being asked to self-isolate, most of them having been “pinged” by the National Health Service’s contact-tracing app. The “pingdemic,” as it’s been dubbed, has produced huge disruptions for businesses and critical services that threaten to undermine efforts to revive an economy still recovering from its deepest recession in 300 years.

Fewer contacts will be traced by shortening the time a person testing positive is assumed to be infectious. Tens of thousands of people will no longer be required to self-isolate if they come into contact with someone who has tested positive for coronavirus following major changes to the NHS Covid-19 app, the government has announced. From Monday, the app will only “ping” a person’s close contacts from the two days prior to a positive test, instead of the current five days.

I'm Deleting the NHS COVID App to Avoid Getting 'Pinged'

When the NHS COVID-19 app was launched in September 2020, few could have predicted that it would be responsible for what is now being called the “pingdemic”. In July this year, more than 600,000 people have been notified or ‘pinged’ by the app and told to self-isolate.

Pandemic meets “pingdemic”: Coronavirus infections rise sharply and an official app tells legions of people to stay home after exposure, even as most restrictions are lifted.

Why Are U.K. Employees, Who Don't Have COVID, Not Showing Up For Their Jobs?

In the U.K., thousands of people are not showing up to work. But it's not that they're sick with COVID. Instead, they're using an app that warns them if they've come in close contact with an infected person.

England’s ‘pingdemic’ is a convenient distraction from the real problem

More people are being pinged because Covid infections are out of control. But No 10 has its head in the sand