Where in health am I? : Home / Health Cloud / StaynHealthy / Sleep & Health / Snoring

Laugh and the world laughs with you; snore and you sleep alone - Anthony Burgess 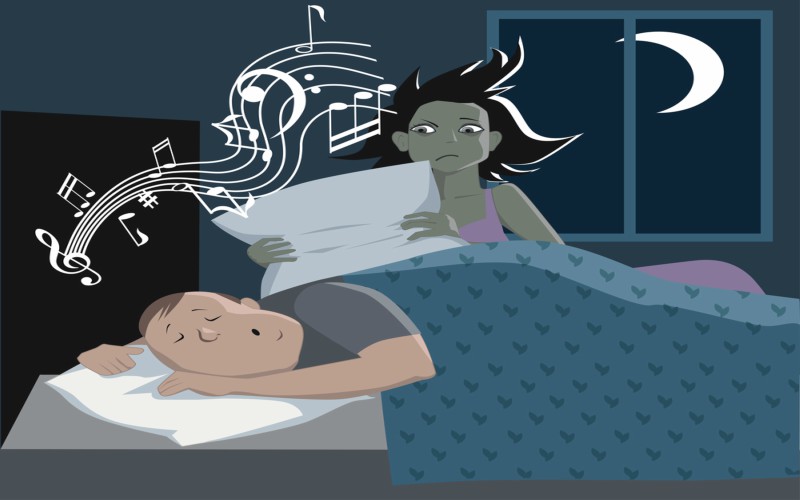 Is Snoring Dangerous? Here's When to Worry

Winston Churchill was a notorious snorer. So, allegedly, was Queen Victoria. They have plenty of company. Roughly 1 in 3 men and 1 in 4 women snore every night or almost every night, according to statistics from the National Sleep Foundation.

Why do people snore? “When we’re asleep, we tend to lose muscle tone—meaning the tongue flops back and the tissues and muscles in the throat and nose relax,” says Dr. Brett Comer, a head and neck surgeon and associate professor of otolaryngology at the University of Kentucky. As you inhale and exhale, the air passing over and between these relaxed tissues causes them to vibrate, which in turn causes noise. That’s snoring.

Beyond Annoying: How To Identify The Sounds Of A Troublesome Snore

Snoring is never great news, but often it's harmless (other than the pain your sleeping partner may feel). In some cases, though, it's a sign of something serious.

Why do people snore?

Dangers of Second-Hand Snoring: When Bedtime Is a Health Hazard

Sleeping with a snorer isn't just annoying -- it's also unhealthy.

Health Check: is snoring anything to worry about?

There’s nothing quite like the sound of snoring as the ultimate sleep interrupter. But snoring can be more than just a frustration to those in your vicinity. Sometimes snoring is linked to more serious health problems, such as obstructive sleep apnoea. An emerging line of research suggests snoring may directly contribute to cardiovascular health problems.

Nowadays we think it’s laughable to imagine that a mere 50 years ago, Lucy and Ricky Ricardo slept in twin beds on TV for the sake of propriety and censorship...But many couples today are still embracing the twin bed — and it has little to do with sex. It’s about a spouse or partner who snores.

How to Snore in Korean

The mystery of onomatopoeia around the world.

Snoring Can Actually Kill You

Many take snoring as just a funny nuisance, but really it can be a sign of bigger problems.

I snore. My wife snores. Our cat snores. Next door’s dog snores. I’ve heard zoo animals snore. Revealing your position to every predator within earshot when you are vulnerable has got to be a bad idea. But we don’t snore all the time, so it’s not an unavoidable activity like breathing. So why hasn’t evolution eliminated snoring?

The Scary Connection Between Snoring and Dementia

If you don’t snore, you likely know someone who does. Between 19% and 40% of adults snore when they sleep, and that percentage climbs even higher, particularly for men, as we age. It’s a nuisance for bed partners, but researchers say we shouldn’t be so quick to write off snoring or other forms of disrupted breathing while asleep as mere annoyances; instead, they could be affecting the brain, according to new research.

Why snoring can be dangerous for your cardiovascular health

Your snoring might sound like a tractor revving up, but it could actually indicate that the cells in your veins are breaking down.

Is Snoring Dangerous? Here's When to Worry

Winston Churchill was a notorious snorer. So, allegedly, was Queen Victoria. They have plenty of company. Roughly 1 in 3 men and 1 in 4 women snore every night or almost every night, according to statistics from the National Sleep Foundation.