Where in health am I? : Home / Health Cloud / StaynHealthy / Global Health / Discrimination / Racism / Racism in Healthcare

No one should be denied the opportunity to see a doctor because of how much money is in their pocket or where they live. Our loved ones shouldn’t die from easily curable diseases...Black Lives Matter - Renee Bracey Sherman 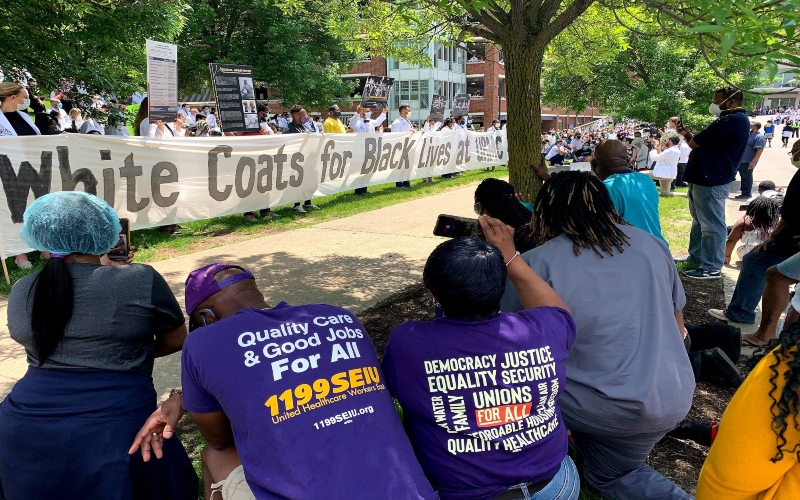 The coronavirus pandemic didn’t create the health disparities among Americans, but it has exposed once again how stark the problem is. Black and Latino patients are two to three times as likely as white patients to be diagnosed with COVID-19, and more than four times as likely to be hospitalized for it. Black patients are more than twice as likely to die from the virus. They also die from it at younger ages. COVID-19 has exacerbated long-standing trends: Black and Latino Americans have lower rates of insurance coverage, a higher prevalence of chronic diseases, worse health outcomes, and a lower life expectancy. People in the health-care world sometimes speak of these patterns as if they are…

UpToDate has a racism problem. Its name is Dr. Stanley Goldfarb

For several years, Goldfarb has been a vocal critic of considering social determinants of health, racism, and anything else he considers too “woke” in medical education or health care at large.

The team found that black people assigned the same score as white people went on to have worse health outcomes. “You can think of it as healthier white patients being put ahead in line of sicker black patients when it comes to allocating enrolment into this programme,” says Obermeyer.

A Growing Push to Treat Racism’s Impact on Mental Health

A reckoning for health care professionals: Should they be activists, too?

Amid the dual crises of a global pandemic and a reckoning with systemic racial injustice, health workers and health educators are grappling with a momentous question that hovers between personal and professional: how much of an activist should a health care worker be?

Bad Medicine: The Harm That Comes From Racism

Racial discrimination has shaped so many American institutions that perhaps it should be no surprise that health care is among them. Put simply, people of color receive less care — and often worse care — than white Americans. Reasons includes lower rates of health coverage; communication barriers; and racial stereotyping based on false beliefs.

How to fix racial disparities in medical care.

Doctors and nurses are on the front lines of protests despite the coronavirus: 'Racism has been killing our patients since the hospital was built'

Healthcare workers are also joining the protests because they're combating the same disparities they see in their work. Both the novel coronavirus and police brutality have disproportionately affected people of color.

Doctors and Racial Bias: Still a Long Way to Go

It would be easy to look at a photo from the 1980s and conclude that things have changed. Many have not.

Six black women tell us how they had to advocate for themselves in the doctor's office.

From a small town in North Carolina to big-city hospitals, how software infuses racism into U.S. health care

The railroad tracks cut through Weyling White’s boyhood backyard like an invisible fence. He would play there on sweltering afternoons, stacking rocks along the rails under the watch of his grandfather, who established a firm rule: Weyling wasn’t to cross the right of way into the white part of town.

How Doctors Deal With Racist Patients

Hospitals are reshaping their policies to protect their employees’ rights while giving all patients the treatment they need.

Health inequity for African Americans is not a new phenomenon. COVID-19, however, shined a light on the problem. Racism is not isolated to health care services, and it remains pervasive throughout our society. But by taking the tangible steps outlined here, providers can begin to solve the problem.

Most healthcare organizations have a “patients bill of rights,” but few offer similar protections to staff. Historical institutional responses to racist behavior from patients at staff is meek at best, with many operating without any formal policies or institutions.

The reverberations of George Floyd’s death last month during a police arrest in the US have sounded through academia, with thousands of scientists striking over racism in their fields. They have good reason: the odds of succeeding in science are still overwhelmingly stacked against black people and those from other ethnic minority groups.

Race Isn’t Supposed to Matter in the ER, but It Does

How race can influence who lives and dies from trauma.

Racism and discrimination in health care: Providers and patients

Articles addressing racism in medicine suggest many of the same things. To fight racism and discrimination, we all need to recognize, name, and understand these attitudes and actions. We need to be open to identifying and controlling our own implicit biases.

Government officials are rushing to declare racism a public health crisis across the United States. The city council in Austin, Texas made the announcement on Wednesday, officials in Louisville, Kentucky are set to follow suit, and they will join local officials in 19 states who’ve recently recognized racism as a public health issue. These statements mark a shift for public bodies that, for decades, have underplayed health research on social issues.

The investigation was launched after ER nurses and doctors were caught playing a racist game about Indigenous people's blood alcohol levels. Now more than 10,000 people have complained about mistreatment.

The politics and policy of racism in American health care

We’d have to go as far back as slavery to fully grasp the racial history of US health care, but I’ll start at a much more proximate place: 1946. On August 13 of that year, President Harry Truman signed the Hill-Burton Act (then known as the Hospital Survey and Construction Act).

To Be Young, A Doctor And Black: Overcoming Racial Barriers In Medical Training

As institutions everywhere confront the impacts of racism and inequity in their systems, medicine is not immune. Lack of access to health care isn't just a problem for Black patients, who continue to face economic, social, and cultural barriers. The gaps are evident in the profession itself. Black physicians remain in a disproportionately small minority. And many African American doctors say that's because medical training itself alienates them, perpetuating those gaps which, in turn, affects the care patients receive.

When Racism Anchors Your Health

An exploration of health disparities in America shows that even if you’re a black American in 2018 with a sound bank account, you can’t buy whiteness.

As COVID-19 disproportionately devastates Black communities, seven in ten African Americans say people are treated unfairly based on race or ethnicity when they seek medical care.

While the first doses of the new COVID-19 vaccine are being administered to California health care workers this week — and will be available to the broader public next year — Rupert McClendon will not be rushing to get it. “I would not trust it, in no shape or form,” said 42-year-old McClendon, a special education teacher in Sacramento. McClendon’s misgivings about vaccines are rooted in family history.

Racism in Medicine: As Doctors, We Must Do Better

I implore my colleagues to not only take time to recognize the contributions of Black people in the United States, but also to acknowledge the many ways Black bodies have involuntarily contributed to medical advances we take for granted. Only then can we begin to change the health-care system and our role in perpetuating biases within it.

The matter of race is a common thread throughout the historical tapestry of American society. Discourse on race tends to focus on the lived experience of Black people, because of the “peculiar institution” of slavery in America.

To begin addressing racial bias in medicine, start with the skin

Racial inequity in the U.S. health system is, in many ways, far deadlier than police violence. The failures of the health care industry to appropriately care for Black patients are well-documented, resulting in the lowest life expectancy of any major group in the U.S.

When receiving healthcare people would think this is a time that all people would be treated equally however this is not always the case. To understand the division in healthcare certain factors, need to be explained, starting with implicit bias and history.

The US has a long history of abusing minorities for pharmaceutical profit. Messaging for a Covid-19 inoculation will have to overcome that past.

“A white medical industry has never taken Black pain and suffering and illness as seriously and passionately as compared to white folk and rich folk,” says Cooper-Owen. “Blaming patients isn’t a fruitful exercise. As a system and structure, we need to transform.”

Disastrous errors by medical examiners have raised questions about whether they are influenced by prejudgments and a close relationship with the police.

I Was Pregnant and in Crisis. All the Doctors and Nurses Saw Was an Incompetent Black Woman

Everything about the structure of trying to get medical care had filtered me through assumptions of my incompetence. There it was, what I had always been afraid of, what I must have known since I was a child I needed to prepare to defend myself against, and what it would take me years to accept was beyond my control. Like millions of women of color, especially black women, the healthcare machine could not imagine me as competent and so it neglected and ignored me until I was incompetent.

The Coronavirus Doesn't Discriminate. U.S. Health Care May Be A Different Story

The coronavirus doesn't discriminate in who it infects. But some doctors say the U.S. health care system's pandemic response is already showing familiar patterns of bias.

“Are you a doctor?” The unchecked racism faced by physicians of color.

I’m a medical student. Here’s how we’re trained to deal with racism.

Instead of reducing disparities, the industry makes them worse. Here’s how to change that.

To dismantle racism in medicine and promote the health, well-being, and self-determination of people of color.