Where in health am I? : Home / Health Cloud / StaynHealthy / Exercise / Tai Chi

Tai chi does not mean oriental wisdom or something exotic. It is the wisdom of your own senses, your own mind and body together as one process - Chungliang Al Huang 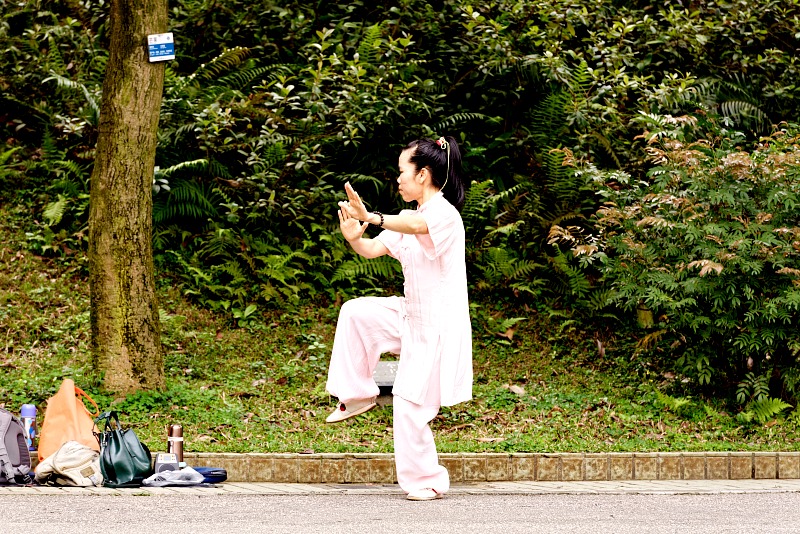 5 Reasons You – Yes You – Should Try Tai Chi Right Now

When Linda Huang moved from China to the U.S. about 18 years ago, she suspected she’d have to do a lot of outreach and education to get non-Asians interested in tai chi, which she had been practicing since her teenage years. She didn’t. “I was impressed how many people have been studying tai chi since the 1970s and 1980s,” says Huang, who directs the American Tai Chi and Qigong Association in Herndon, Virginia. Interest has only grown since, she says, judging from the association’s inquiries from people seeking teaching certifications and class recommendations, as well as health clubs looking for instructors to hire. What’s the big appeal?

It has been practised for years in China – often by big groups in parks. Tai chi or “taiji” is a form of qi gong, an umbrella term for ancient Chinese traditional practices of self-cultivation and energy preservation. And it is different to the martial art form known as “Tai Chi Chuan” or “Taijiquan”. Tai chi is a “mind-body exercise”. You do slow, gentle, and fluid movements with your body. While doing this you focus on the movements and your breathing and forget about the stresses of life. Anyone can do tai chi. It is suitable and safe for people of all ages and abilities – though may need to be adapted for certain people or if you have a medical condition.

Tai chi moves can be easily learned and executed by people of all ages and states of health, even elderly people in wheelchairs.

A Downside to Tai Chi? None That I See

The graceful, dancelike progression of meditative poses called tai chi originated in ancient China as a martial art, but the exercise is best known in modern times as a route to reduced stress and enhanced health. After reviewing existing scientific evidence for its potential health benefits, I’ve concluded that the proper question to ask yourself may not be why you should practice tai chi, but why not.

Can Tai Chi Truly Help Those With Knee Arthritis?

Tai Chi--an ancient Chinese therapy used to reduce stress and fight anxiety—is as effective as standard physical therapy in patients suffering with osteoarthritis of the knee, according to results of a new study.

CATHERINE KERR has found an antidote for the hectic pace of laboratory life in the daily practice of tai chi. This centuries-old Chinese mind-body exercise, now gaining popularity in the United States, consists of slow-flowing, choreographed meditative movements with poetic names like “wave hands like clouds,” “dragons stirring up the wind,” and “swallow skimming the pond” that evoke the natural world. It also focuses on basic components of overall fitness: muscle strength, flexibility, and balance.

The health benefits from Qigong and Tai Chi comes about both by supporting the body’s natural tendency to return to balance and equilibrium and also gently yet profoundly creating strength, flexibility and balance in the muscles and joints through gentle flowing movements.

Is Tai Chi the New Yoga?

Second, tai chi is not Soul Cycle. There is no way to rationalize the effort via muscle tone or calories burned. It is intrinsically mysterious. The benefits are subtle, occur over time and vary tremendously from person to person.

Tai chi and the art of well-being, self-defence

Tai chi cultivates life essence and research suggests that the health benefits are extensive and wide-ranging.

Tai Chi and Your Health

You may have seen the flowing postures and gentle movements of tai chi and wondered what it’s all about. Tai chi is an ancient mind and body practice. While more research is needed, studies suggest that it may have many health benefits.

For modern, harried lifestyles focused on getting and spending, fitness experts say tai chi, the ancient Chinese slow-moving exercise, can be an ideal way for anyone to stay fit.

Practicing tai chi helps older people improve their balance and avoid falls, a review of studies has found. Tai chi is a form of Chinese martial arts now practiced as exercise. It involves a specific program of graceful movements, accompanied by deep breathing and mental focus, that slowly move the center of balance from one leg to the other. Researchers found 10 randomized trials analyzing the effect of tai chi on the incidence of falls or the time until an elderly person first has a fall. All studies compared tai chi to usual care or other treatments like physical therapy, stretching or exercise.

Chinese men who practiced tai chi were less likely to die over a five-year period than men who didn't exercise at all, in a new study.

The Forgotten (Female) Pioneers of Tai Chi in the West

The little known history of how two unlikely women introduced the Chinese martial art of tai chi to the world.

The Forgotten (Female) Pioneers of Tai Chi in the West

The little known history of how two unlikely women introduced the Chinese martial art of tai chi to the world.

The health benefits of tai chi

This gentle form of exercise can help maintain strength, flexibility, and balance, and could be the perfect activity for the rest of your life.

What is Tai Chi?

Tai chi, sometimes written as t'ai chi, is a self-defense and calisthenics technique developed in China centuries ago as a maturation of several similar but separate exercises. The more formal name of this technique is tai chi chuan, which translates loosely to "supreme ultimate boxing."

Practising tai chi, qigong and other such exercises lowers blood pressure, bad cholesterol and triglycerides, and reduces depression, in stroke patients and people with heart disease and high blood pressure.

Why Tai Chi Makes Sense for the Elderly

A new study suggests Tai Chi may provide the benefits of strength training without the drawbacks for the heart.

5 Reasons You – Yes You – Should Try Tai Chi Right Now

The practice's benefits apply to all ages, ethnicities and abilities.

Would you like to learn Tai Chi, but don't know where to start? Or perhaps you're an experienced practitioner looking to enhance your skills.

Dr Paul Lam, with medical and tai chi experts, created the Tai Chi for Health Institute to empower people to improve health through his programs.

If You've Got 20 Minutes A Day I Guarantee A Healthier, More Energized You

The Tai Chi Foundation (TCF) is a not-for-profit educational organization that promotes, funds and teaches programs that enable people to learn tai chi chuan and embody its principles.

Our mission is to make the remarkable benefits of Tai Chi and Qigong mind body exercise accessible to everyone, regardless of age, ability or physical condition.

The Tai Chi Union for Great Britain exists to unite Tai Chi practitioners, promote Tai Chi in all its aspects including health, aesthetic meditation and self defence and to improve standards and collate and disseminate information on Tai Chi classes and events in Great Britain and elsewhere.

An Online Journal by American Tai Chi and Qigong Association.

Comprehensive and reliable information about Tai Chi and its benefits on various health topics.

The Tree of Life Tai Chi Center was established in 1985 to build bridges between Eastern and Western approaches to health, well-being, and personal development. Our curriculum is centered around Tai Chi Chuan, qigong, meditation, and related healing and martial arts -- practices that strengthen and revitalize the body, nourish the heart, and focus the mind.

What Are the Benefits of Tai Chi?