There's no such thing as a healthy tan, and that's what people need to understand - Gabrielle Union 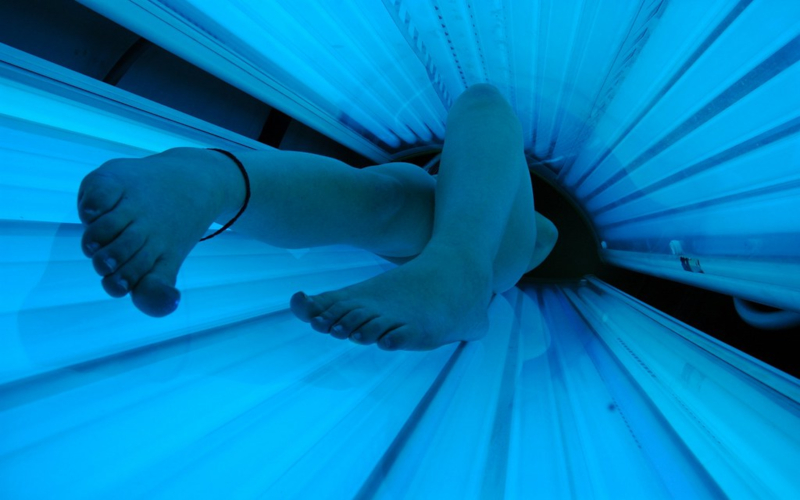 Even 1 Trip to the Tanning Bed Isn't Worth the Risk

After growing up in sunny Florida and heading into my freshman year in Michigan, spending time in tanning beds was a staple of my weekly Winter routine. But after experiencing my first skin cancer scare when I was just 19, I knew it was time to pull the plug on this dangerous habit. I wish I could say that my experience was rare, but the research proves just the opposite: people who start using sunbeds under the age of 35 increase their skin cancer risk by 75 percent.

When the weather cools off, it can be tough to say no to even an occasional trip to the tanning bed. But it's important to know that every time you turn on those UV lights and lay down, you're seriously hurting your…

Can You Be Addicted to Tanning? New Study Says Yes

The medical community and organizations like The Skin Cancer Foundation have been warning people for years to stop tanning. Hundreds of former tanners who became skin cancer patients have shared their stories online and cautioned people not to make the same mistakes. So why do some people continue to tan? New research confirms that for some, quitting tanning is not that simple.

When appearance isn't behind the drive to excessively tan, mood altering may be the motivation. Studies over the years have looked at the affect that ultraviolet rays (UV) have on mood, and many researchers and dermatologists believe that UV rays can be addictive.

The Bronze Age: Shedding light (and throwing shade) on our tanning infatuation

Whether it's beds or sprays, tanning has become a pervasive part of our culture.

The tanning bed in your gym is worrying dermatologists

Tanning beds are known carcinogens, but some of the nation’s biggest gym chains, including Planet Fitness and Anytime Fitness, offer tanning beds and booths in many of their locations. In fact, the gym “seems to be a very popular place for tanning beds,” says Sherry Pagoto, the study’s first author.

We Asked 20-Somethings Why They Still Use Tanning Beds

The risks are well known, but that's not stopping many young men and women from soaking up UV rays.

Is an artificial tan safer than the real thing?

And look—we here at PopSci get it. But we also get that research has conclusively shown that tanning under UV rays, whether at a salon or under the sun, is terrible for your skin and raises your cancer risk. But the only other alternative seems to be sunless tanning lotions—and are those any better? Despite the weird meat association, though, this chemical reaction is totally safe for your skin.

Think indoor tanning is a safer alternative to sitting in the sun? Think again

About 30 million people tan indoors in the US every year, and about 2.3 million of them are teens. And research indicates, for example, that the lifetime risk of skin melanoma increases by 75% among people who began using UV tanning devices before age of 35 (called young exposure). Yes – 75%. That figure alone should be enough to make some of us rethink the importance of that tan. And if the increased risk of skin cancer isn’t enough, what about the increased risk of eye damage, wrinkles and other forms of premature aging of the skin? It begs the question – is that tan really worth it?

Guys, this news is so crazy and disturbing that we're just going to jump right in: Every year, indoor tanning causes more cases of skin cancer than does smoking for lung cancer. Let us repeat: The number of skin cancers we can blame each year on indoor tanning is higher than the number of lung cancers we can blame on cigarettes.

Overexposure to UV radiation from the sun and artificial sources is of considerable public health concern. UV radiation plays an important role in the development of skin cancer, cataracts, and other eye conditions, and suppresses the immune system. Cumulative UV radiation also results in premature skin ageing. While WHO does not recommend the use of UV tanning devices for cosmetic purposes, it is recognized that sunbeds continue to be available to the public.

Beware of the Killer Tanning Bed

Commercial tanning beds will be banned in Queensland from late next year, with salons paid $1000 for their machines. But there is no obligation for businesses to take up the Government's offer. They can choose, instead, to sell them to private buyers in pursuit of higher returns. Backyard operators are already snapping up second-hand machines and offering tans to their friends.

Sunlamps and tanning beds promise consumers a bronzed body year-round, but the ultraviolet (UV) radiation from these devices poses serious health risks. “Although some people think that a tan gives them a ‘healthy’ glow, any tan is a sign of skin damage,” says Sharon Miller, M.S.E.E., a Food and Drug Administration (FDA) scientist and international expert on UV radiation and tanning.

Isn’t it Time to Put Pre-Prom Tanning to Bed?

As parents, it’s our job, not only to apply sunblock to our babies, but to educate our teens and ourselves about sun safety. As my 16-year-old excitedly plans for her prom — she already has her gorgeous dress!! — I’m happy to say that tanning will never be on her to-do list!

Tanning salons are already under siege -- they got taxed by the health law, are newly regulated by the federal government and states, and have become dermatologists' favorite bad guy. But some policymakers say that's not enough.

Next Frontier in the Move to Ban Tanning Beds

Australia cracks down on indoor tanning amid global push to cut skin-cancer rates.

Now, we find ourselves in a similar public health fight against another cancer-causing habit: tanning, and indoor tanning in particular.

Sun (lamp) worshippers can't catch a break, and neither can the small-business owners catering to them. In a study commissioned by ABC News, a common chemical in spray tan solutions -- dihydroxyacetone, or DHA -- was found to possibly cause cancer.

The End of Tanning?

In the wake of research showing strong connections between indoor tanning and melanoma, the sunbed industry is battered and contracting. But the allure of artificially bronzed skin might be dwindling in general.

Think indoor tanning is a safer alternative to sitting in the sun? Think again

The demand for that bronzed look remains high (the indoor tanning industry is valued at US$2.6 billion) and this is unlikely to change any time soon given the aesthetic appeal. And while a call for an outright ban may make sense from a public health perspective, such a call would be highly unpalatable to consumers, business operators and the states, which benefit from the economic activity. But more should and can be done to protect young tanners.

The International Agency for Research on Cancer, part of the World Health Organization, has labeled indoor tanning devices to be “carcinogenic to humans.” So why do so many college campuses have them?

Use Of Tanning Beds Common, Despite Cancer Risks

"What tanning beds are doing is concentrating the same kind of rays that we get from the sun; so, you're getting a much bigger dose" than you would from the same amount of time outdoors, Memorial Sloan-Kettering Cancer Center's Dr. Allan Halpern, told Shots when we talked to him about an earlier study on the risks of indoor tanning.

Warning: That Tan Could Be Hazardous

Indoor tanning might seem like a fashion that faded with the 1980s, but it remains a persistent part of American adolescence, popular spring, summer and fall but especially in winter, when bodies are palest.

Why Do Young White Women Risk Cancer To Be Tan?

Skin cancer is now the most common form of cancer among young women. And frequent indoor tanners are up to three times more likely to develop melanoma than those who never go, according to a 2010 study.

Even 1 Trip to the Tanning Bed Isn't Worth the Risk

When the weather cools off, it can be tough to say no to even an occasional trip to the tanning bed. But it's important to know that every time you turn on those UV lights and lay down, you're seriously hurting your skin. Not only are you affecting your risk of cancer, you're also changing your skin's texture, which means you're more likely to experience premature aging in the form of wrinkles and sun spots.

Although the risks are widely known now, some people won’t forgo the pursuit of a glow. Much improved in recent years, fake-bake products can safely give you a credible tan. Try these six.

Indoor tanning can cost you your healthy skin and your life, so how are these salons staying in business?

A tan, whether you get it on the beach, in a bed, or through incidental exposure, is bad news, any way you acquire it. Tans are caused by harmful ultraviolet (UV) radiation from the sun or tanning lamps, and if you have one, you’ve sustained skin cell damage.

Tanning beds use UVA light, which penetrates the skin more deeply than UVB rays. So tanning beds can cause just as much — if not more — damage as the sun. Plus, the concentration of UVA rays from a tanning bed is greater than the amount of UVA rays a person gets from the sun. And despite manufacturer claims, some tanning lamps do also emit UVB light.