Many ingredients are called 'earthy,' but none comes as close to fitting the bill as buckwheat. I'm mildly obsessed with the stuff. - Yotam Ottolenghi 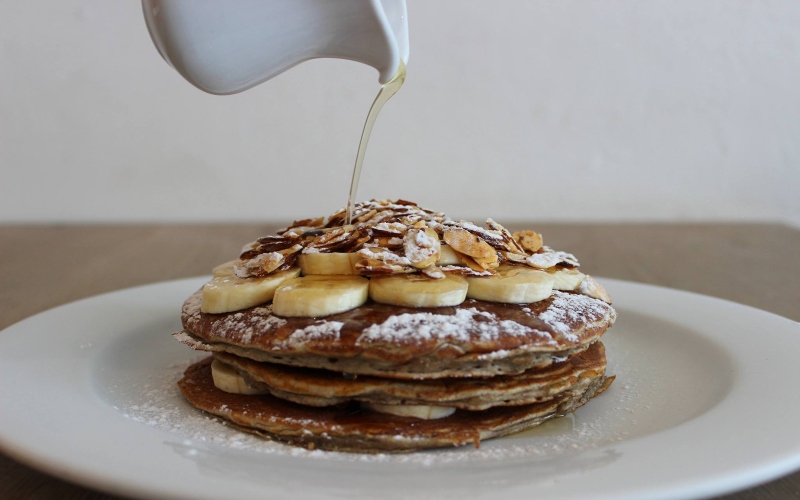 Legend has it that, 1,000 years ago, when Greek monks spread Christianity to Russia, they brought with them more than just the Bible. They brought a grain, a seed, so magical, nutritious and delicious that it struck an instant chord with the Slavic soul - and the Russian stomach.

That grain was buckwheat.

And because the first people to cultivate it here were Greeks, the Russians called it grechka.

Ever since, Russians have been boiling it and baking it, making porridge and pancakes with it, loaves of bread too - and cutlets.

On dinner plates across 11 time zones in this, the biggest country in the world, you'll find buckwheat in kindergartens and field kitchens,…

How to cook buckwheat

Learn how to cook buckwheat with our expert tips and step-by-step method. Then, try our recipe ideas, including fresh salads, porridge and pancakes.

All that being said, Ramsey likes to kick-start his mornings with a stack of cacao pancakes. "It's a buckwheat pancake, so there's more nutrient density," he notes. (Read: Buckwheat is rich in antioxidants, and it's the only pseudocereal that contains the powerful flavonoid rutin.) "It's a really nutrient-dense little disk."

Buckwheat: Health Benefits, Nutrition Facts, and How to Eat It

Here's the scoop on the seed's health benefits—plus creative and fun ways to add it to your meals.

Grain of the month: Buckwheat

Despite its name, buckwheat is not a type of wheat. Officially, it's not even a grain but rather a seed that's harvested from a flowering plant related to rhubarb. But the pyramid-shaped kernels are similar to grains from both a culinary and nutritional perspective. Buckwheat is gluten-free but rich in fiber and several minerals.

Gluten-free, earthy and versatile, this ingredient is becoming the darling of pastry chefs around the country. Just don't call it a grain.

Soba: More Than Just Noodles, It's A Cultural Heritage ... And An Art Form

Tofu, mochi and miso are a few examples, but it's the buckwheat noodle, or soba, that many consider the humble jewel of Japanese cuisine. It's not easy to find in the U.S., but one Los Angeles woman is helping preserve the craft of making soba. In a cooking classroom off a busy street in L.A., Sonoko Sakai is teaching about the simplicity of making buckwheat noodles.

Buckwheat enhances the production of a protein that supports the longevity

A healthy low-calorie diet that contains plant products can help us improve the level of sirtuin 1 (SIRT1) protein production that is known to increase life expectancy.

Buckwheat Vs Wheat: Which One Is A Healthier Option? Expert Reveals

Wheat is one of the world's staple foods; billions of people across the world eat it daily. It is the most common cereal grain after rice that can be found in cuisines across the globe. Wheat is a seed of a grass, but botanically, it is a fruit called a Caryopsis. On the other hand, buckwheat is a seed of Asian origin. It is not a grass like wheat and is called a pseudo cereal because of its use in the culinary world where we use it as a cereal and not like a seed. It has gained popularity in recent times because of its rediscovered nutritional benefits.

Buckwheat has more protein than rice, wheat, millet or corn and is high in the essential amino acids lysine and arginine, in which major cereal crops are deficient. Its unique amino acid profile gives buckwheat the power to boost the protein value of beans and cereal grains eaten the same day. Yet, buckwheat contains no gluten—the source of protein in true grains—and is therefore safe for people with gluten allergy or celiac disease.

The Health Benefits of Buckwheat

Not related to wheat in any way, buckwheat is actually a seed that comes from the plant Fagopyrum esculentum, which remains fairly short but becomes very widespread and develops green heart-shaped leaves with tiny white flowers. Cultivated as a grain-like seed and a cover crop throughout Asia and in parts of Europe and North America, the seeds of the plant are commonly referred to as a pseudocereal. The seeds are rich in protein and fiber, as well as a variety of antioxidants and other nutrients, which leads many people to consider buckwheat a superfood.

The Powerful Health Benefits of Buckwheat

This lesser-known fruit seed offers more than one reason to incorporate it into your diet now.

On dinner plates across 11 time zones in this, the biggest country in the world, you'll find buckwheat in kindergartens and field kitchens, plush restaurants and factory canteens. Forget vodka and beetroot soup. It's buckwheat that's really part of the Russian identity.

Buckwheat has often had a dull reputation associated with it, particularly because its flavor is somewhat lacking and it is a healthier option that requires more effort when being prepared. It is also not as readily available as other harmful, fatty snacks and meals may be.

Despite having ‘wheat’ in its name, buckwheat is actually a seed (sometimes referred to as a ‘pseudograin’) like quinoa and amaranth. Buckwheat is processed into groats, which are small, nugget-type granules that can be used in the same way as rice. You can also find buckwheat as flour, noodles or even as flakes, making it a versatile substitute for wheat flour.