Where in health am I? : Home / Health Cloud / StaynHealthy / Eat / Diets / Mediterranean Diet

Ultimately, we need to acknowledge that in the places around the world where diets are the healthiest, such as the Blue Zones, it’s not because doctors are giving good counseling – it’s because good food is the prevailing norm - Dr. David L Katz 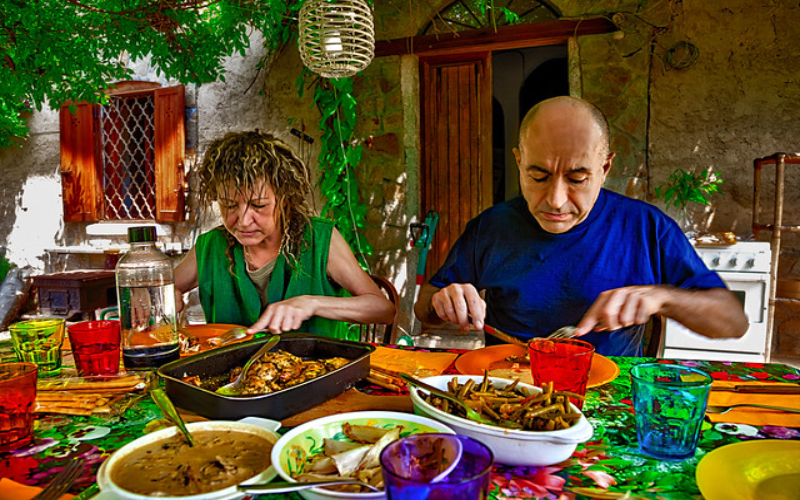 There are numerous diets out there to choose. Some good, some not so good. Some are man-made and some have been traditionally followed for years. One of those diets that has stood the test of time, has been followed by real people and has the research to support it, is the Mediterranean diet. A non-restricting diet associated with numerous health benefits. And while it is a specific way of eating, it is also a way of living.

This Mediterranean diet study was hugely impactful. The science has fallen apart

Nutrition science is supposed to tell us how to eat. It’s in the midst of a crisis.

A skeptical look at popular diets: Thumbs up for Mediterranean

It is difficult to make this diet unhealthy. As with many generally healthy diets, though, over-consumption of calories can be a problem, so an overemphasis on carbohydrates, such as pasta and bread, can make this diet less healthy. Also, this diet can be oversimplified by making it mostly about olive oil without including all its other features.

How to Get America on the Mediterranean Diet

In 1953, not long before President Dwight Eisenhower suffered a heart attack in office, the social scientist Leland Allbaugh published “Crete: A Case Study of an Underdeveloped Area.” The landmark analysis of the eating patterns of an isolated Greek population strongly suggested that a calorie-limited diet high in fresh fruits and vegetables, whole grains, and olive oil and low in animal protein, particularly red meat, could lower the risk of heart attacks and strokes, decrease chronic disease and extend life. Medical research over the last half-century has largely borne out this initial finding.

Mediterranean diet reduces stroke risk in women – but not men

Ancel and Margaret Keys, an American husband-and-wife team, first reported on the Mediterranean diet’s health benefits in 1975. Since then, the diet has become particularly well known for its effect on cardiovascular health. What is less well known is whether the diet has different benefits for men and women. Our latest study sheds some light on the matter.

Vegan or Mediterranean diet – which is better for heart health?

In a recent study we compared the short-term effects of the Mediterranean and the vegan diet. Our findings suggest that, at least in the short-term, the Mediterranean diet improves significantly the availability of nitric oxide in our veins and arteries – which is important to maintain the good health of our vascular system. Nitric oxide is severely affected by the ageing process and is strongly related to the development of cardiometabolic diseases. So, the observed greater nitric oxide availability is very positive news.

Why DASH And Mediterranean Are The Best Diets For 2018

Calling this a diet is a misnomer; it’s more of a lifestyle approach among people from around the Mediterranean Sea. Diet is just one of the components. There's also physical activity (walking, biking, swimming, yoga), work, and social activities (enjoying meals with family and friends) in the equation.

The Mediterranean Diet: Is It the Food or the Lifestyle?

For decades, health authorities have argued that the diet of people living in Mediterranean countries, with its emphasis on olive oil, nuts and fresh produce, is a driving force behind the region’s historically low rates of heart disease. But now a team of filmmakers led by a British cardiologist say that the function of the Mediterranean diet may have been oversimplified. They contend in a new film that the region’s good health is driven not only by food, but by an array of lifestyle factors, some of which they claim have been overlooked.

Another Study Confirms The Beauty Of The Mediterranean Diet. So Why Are We Not All On It Already?

If we didn’t quite believe that the Mediterranean diet was one of the best for heart health – not to mention a slew of other areas of health, and longevity – a new study offers even more evidence.

Researchers have documented that a Mediterranean diet rich in vegetables, fish, whole grains, along with daily servings of nuts and olive oil can help fend off age-related cognitive decline.

Unlike the Blue Apron’s Whole 30 meal kits, the Mediterranean diet meals aren’t a temporary offering ― they’re here to stay. However, keep in mind the one ingredient that doesn’t come in your meal kits is olive oil, so stock up on your favorite brand.

High-Fat Is Healthy, If It's Part Of A Mediterranean Diet, Study Finds

Finally, fats aficionados officially have license to eat “a lot” of the stuff, according to a new study–if the fats are of the healthy, unsaturated varieties, that is. The new meta-analysis published in Annals of Internal Medicine pulled together a number of previous studies that looked at associations between diet and disease outcomes, and found that people who generally ate a Mediterranean diet, even if it was high in fat, had significantly reduced risk of a number of chronic illnesses.

Mediterranean Diet Best Diet Ever? Not So Fast

The New England Journal of Medicine published a study that, according to the fawning mainstream press, proved "conclusively" that the best diet in the world was the Mediterranean diet, that it protected everyone from heart disease and stroke, and that everyone in the world should be on it. Except the study showed no such thing.

A Mediterranean-style diet may slow memory loss, even if adopted late in life.

Study: Mediterranean Diet Can Save Money

Investing in learning to cook with plants and olive oil could save money in the long run.

The 5 Biggest Misconceptions About the Mediterranean Diet

The Mediterranean Diet Isn’t A Diet, It’s a Lifestyle

It seems like anything with the word diet after it seems to be something that gets a lot of attention. However, we all know – deep down- that diets only “work” if you stay on them indefinably, which tends to be dang near impossible. While companies may have cashed in on the “Mediterranean diet” buzz words – in the sense of a diet, it’s nothing more than a typical fad. IF you approach it as a diet.

What is the Mediterranean diet and why is it good for you?

In simple terms, the Mediterranean diet is a healthy diet (not a low-fat diet) low in omega-6 fatty acids and rich in omega-3 fatty acids (from olive oil). In the 1950s, people in Greece and southern Italy were poorer and consequently ate red meat only about once a week. Herbs and spices were frequently used instead of salt to flavour foods.

New research provides even more proof the Mediterranean diet is really, really good for you. But how much of the diet do you have to follow to reap the benefits? Experts break it down.

There are numerous diets out there to choose. Some good, some not so good. Some are man-made and some have been traditionally followed for years. One of those diets that has stood the test of time, has been followed by real people and has the research to support it, is the Mediterranean diet.

10 Things to Know About the Mediterranean Diet

At this point, you probably already know that the Mediterranean diet is good for your health. Research proves over and over again that people who put an emphasis on produce, fish, whole grains, and healthy fats not only weigh less, but also have a decreased risk for heart disease, depression, and dementia. So what are you waiting for?

The traditional Mediterranean diet is associated with lower rates of those illnesses, along with increased lifespan. So a combination “diabetic” and “Mediterranean” diet seems like a great idea.

The Mediterranean Diet Roundtable is an exclusive networking concept, focused on creating business opportunities between the U.S. and the Mediterranean.

MediterrAsian.com shows you why traditional Mediterranean and Asian eating and lifestyle practices are so health-giving, and provides you with practical advice and recipes to help you follow a similar way of living.

Healthy, Tasty, Sustainable Food: What to eat, where to get it, how to prepare it and why…

For decades, our medical culture and resources have been misdirected towards treating the symptoms of disease and not directly tackling the root causes. The Pioppi Diet combines and layers multiple health positive lifestyle choices – of which food is but one – to fire up your body’s feel-good factor.

We're Kenton and Jane and we're documenting our exploration into Greek Mediterranean cuisine, culture, and Greek inspired dishes. We hope you enjoy these recipes and cultural tidbits!

The Mediterranean-style diet has fewer meats and carbohydrates than a typical American diet. It also has more plant-based foods and monounsaturated (good) fat. People who live in Italy, Spain, and other countries in the Mediterranean region have eaten this way for centuries. Following the Mediterranean diet may lead to more stable blood sugar, lower cholesterol and triglycerides, and a lower risk of heart disease and other health problems.