There's no such thing as soy milk. It's soy juice - Lewis Black 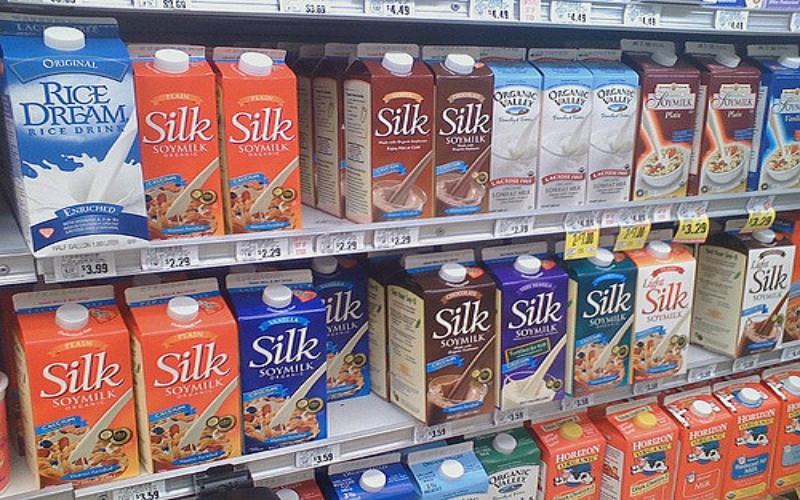 First, a disclosure: The Green Lantern can't really stomach lactose and rarely drinks milk. But he isn't too keen on the taste of soy milk, either, so consider him a neutral arbiter when he concludes that soy is the somewhat more eco-conscious choice. That said, it's not easy to compare the two products:

Soy milk may be packaged and marketed as a substitute for dairy, but environmentally speaking, it's a very different product. Start with the basics: The calcium in soy milk has to be artificially added, and you won't get anything remotely looking like milk from soy until you've ground up the beans; removed a fiber the Japanese call okara; and added water, vitamins, minerals, and…

Should you drink soy or cow's milk? Here's what the evidence says

Overall, the nutritional differences between milk and its alternatives are pretty marginal. The one exception here is flavored milk, which contains a lot of added sugars.

This Type of Non-Dairy Milk is the Healthiest, Study Says

That almond milk latte may be delicious, but a study just published in the Journal of Food Science and Technology suggests that the trendy beverage also has some drawbacks. When researchers compared the nutritional profiles of four popular “alternative” milks, they found that soy milk came out on top—and that almond, rice and coconut “milks” all lacked essential nutrients important for overall health.

Got Soy Milk? Not Consumer Reports, Which Throws Science Under The Bus In Warning About GMO Soy

Consumer Reports has been a sacred bible for me, providing evidence-based analysis of every day products that saves a lot of money without sacrificing quality. I’m 62 and I don’t believe I’ve ever bought a car without consulting CR first. Which makes it all the more distressing that this once venerable institution-in-a-magazine has driven off the science cliff in obeisance to the current hysteria—yes, we are listening Neil deGrasse Tyson—over genetically modified foods.

Since the soy heyday of 2008, when the milk alternative commanded a $1.2 billion industry, soy milk sales have fallen by nearly 60 percent.

Mooove Over Cows?--Soy Milk May Be a Healthier Alternative

Should people drink cow's milk at all? If not, what are some good nondairy alternatives?

A new study looks at the four most-commonly consumed types of milk beverages from plant sources around the world -- almond milk, soy milk, rice milk and coconut milk -- and compares their nutritional values with those of cow's milk. After cow's milk, which is still the most nutritious, soy milk comes out a clear winner.

Which is the better source for milk?

Increase market opportunities and value for U.S. soybean farmers. We achieve this through domestic and international policy advocacy, based on direction set by farmer members. Our efforts are guided by our commitment to produce food, feed and energy in an environmentally sustainable manner.

Silk believes in the goodness (and good-for-you-ness) of plant-based foods. Our soymilk, almondmilk, coconutmilk and other delicious products are simple, wholesome and nourishing, just as nature intended.

To be the world's leading source of information on soy, especially soyfoods, new industrial uses, and history, in electronic database, online and printed book formats.

The Soyfoods Association of North America represents a diverse group united to increase consumption of soy-based foods and beverages.

Making nutritious, tasty plant-based foods and beverages is our heritage. And as we move forward, exploring innovative ways to provide you with better products, we will always stay true to these values.