I would prefer that oat milk become as commonplace as nonfat or whole milk, where people think of it as a third option. Because that’s what sustainability is about: eventually making it a part of the fabric of our lives. I don’t care much about the cool factor. Even saying ‘oat milk’ doesn’t sound cool - Josey Markiewicz 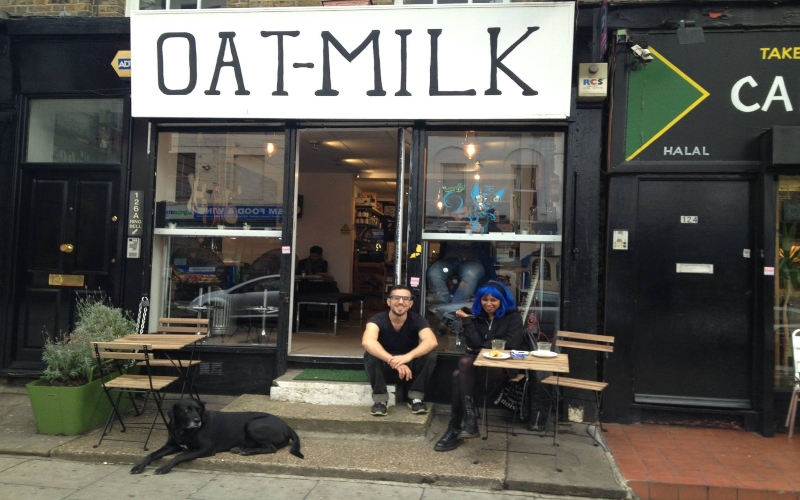 image by: Arrows of Love

Oatly and the quest for the perfect alt-milk

It is at coffee shops — independent, third-wave, the good ones. It is in the grocery aisle. It is in the newspaper, on the internet, in Rep. Alexandria Ocasio-Cortez’s grocery cart. It is oat milk. It is everywhere.

The New York Times has documented “The Humble Ascent of Oat Milk,” illustrated with a very graphic GIF. “How Oat Milk Conquered America,” explained Elemental. “The Non-Dairy Milk You’re About to See Everywhere” promised Food & Wine. So it is official: The oats are happening.

One brand is responsible for this golden age of oats: Oatly, a Swedish company based in Malmo that has, for the past 25 years, been trying to make oats happen. The brand launched in the US in…

Before the pandemic, oat milk was on the rise — now it’s everywhere.

The Humble Ascent of Oat Milk

When did finding something to put in your coffee get so complicated? For the lactose-intolerant or merely dairy-averse, there are more alternatives to good ol’ American cow’s milk than ever.

The Untold Truth Of Oat Milk

We are currently in the throes of a full force, non-dairy milk revolution. Not too long ago, soy and almond milk reigned supreme across cafés and grocery store aisles alike; nowadays, the market for alterna-milks has diversified significantly, with obscure options like macadamia, pea, flax, and hemp all sprouting up as creamy plant-based milks that knock the old school soy and almond milks out of the park.

Oat milk is poised to take over the US

A scientific study suggests the greenhouse gas emissions used in the production of plant-based milks are lower than for dairy milk. But which milk has the smallest impact on the planet?

Is Oat Milk Good For You? 2 Dietitians Weigh In

The conversation around milk used to be about one thing: cow's milk. But now, with so many new varieties of milk — almond, soy, cashew — it can be hard to keep track of how these new milks are made and whether they're really good for you. Oat milk is one of the trendiest new milks on the market. But how exactly do you get from oats to milk, and is the drink a good alternative to cow's milk or other non-dairy milks?

Oatly, a Swedish company, struggles to keep pace with demand for its product; ‘People are always’ asking for it.

Oat milk is coming to your town. Here's how.

In fancy coffee shops across the country, caffeine addicts are increasingly asking for a new side item to go with their fix: oat milk.

These days, a trip to the grocery store to pick up milk can be a daunting task. Not only are there new spins on traditional cow’s milk — ultra-filtered? grass-fed? — but there are also a dizzying array of alternatives made from soy, rice, coconuts, almonds, cashews, hemp and even peas. Now, Quaker Oats is muscling its way into the aisle with a version based on the grain that made it famous.

Soy, Almond, Pea or Oat? The Reinvention of Milk

Supermarkets now have a baffling array of milks—and that is a welcome development.

Soy, oat, almond, rice, coconut, dairy: which ‘milk’ is best for our health?

A trip to the supermarket presents shoppers with an overwhelming number of milk choices. And far from just being the domain of the modern hipster, plant-based milk alternatives are going mainstream.

If you’re not riding the oat milk train yet, hop on.

After a firm with ties to deforestation invested in the Swedish oat milk company last month, fans are calling for a boycott.

The Scientific Genius behind Oat Milk

From marketing, to food and nutritional science, this popular dairy-free alternative succeeds beyond taste.

Oatly and the quest for the perfect alt-milk

9 Oat Milks, Ranked (By Someone Who Hates Oat Milk)

I hate oat milk. Its unappetizing, murky gray color, its thin consistency. The stuff looks more like dirty dishwater than like actual milk. If I’m going to put anything in my coffee, it’s going to be regular cow’s milk. So I’m not sure if my editors were playing a cruel joke or just seeking an honest opinion when they asked me to do a blind oat milk tasting to find the best brand. Keeping an open mind, I begrudgingly accepted the challenge.