Where in health am I? : Home / Health Cloud / Sport & Health / Sport / Paralympics

Paralympians are not born; they are made - Allen Rucker 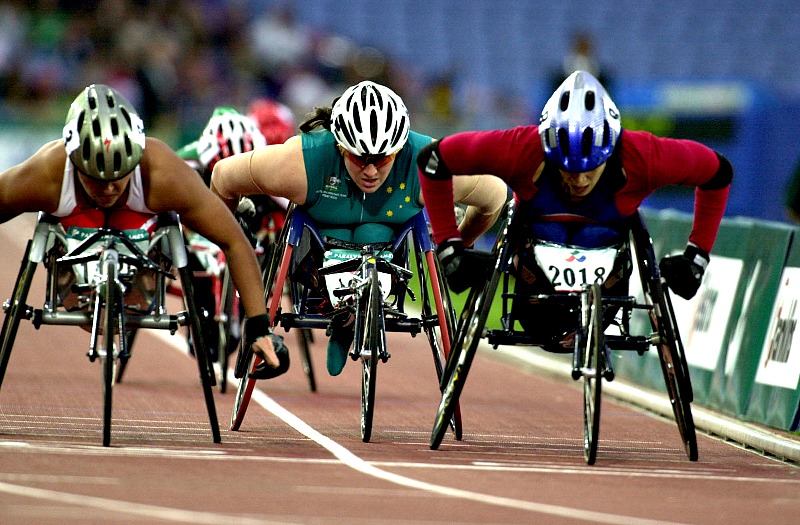 image by: Sport the library

Enough of those stupid political conventions! It’s time for the Olympics! Or more to the point, the Paralympics, the quadrennial world stage where athletes with disabilities can speak the common language of sports and excel in ways that, for the last fifty-plus years, has reaffirmed the obvious – we are just like you.

A little history. In the early 1940’s, a British neurologist named Ludwig Guttman, soon to become Sir Ludwig Guttman, had the then-brilliant notion that paralyzed soldiers from the war shouldn’t just lie around in institutions like invalids but could profit from athletic exercise and competition. At the time many experts thought…

The Paralympics—so called for the Greek prefix para, meaning “alongside”—give elite disabled athletes the chance to compete at the highest level. Not all contenders in the games, which typically run after the Olympics, use wheelchairs, but those who do showcase some of the most technologically advanced assistive devices in the world. Each sport requires different tweaks to the standard chair...

Half a million words and 20m views: the project preserving Australia’s Paralympic history

Before each summer and winter Paralympics, Tony Naar and his small team of enthusiastic volunteers set themselves a challenge: to create a Wikipedia page for every Australian para-athlete competing at the Games. In the past decade, this group – known as the Australian Paralympic history project – have created over 1,000 articles for para-athletes past and present.

Even fitness and recreation facilities that say they are accessible often lack basic accessible features, such as changing rooms, showers and clear pathways so that a person with a visual or physical impairment can easily move about. Truly accessible facilities are often underutilized. Worldwide, people with disabilities can’t get to these places because they have limited or no access to public transit services.

The Differences Between The Olympics, Paralympics And Special Olympics

The Special Olympics welcomes all athletes with intellectual disabilities, of all ability levels, ages 8 and up. Paralympic athletes must fulfill certain criteria and meet qualifying standards in order to be eligible.

The Paralympics strive for inclusion. But some rules unfairly exclude athletes with severe disabilities

The IPC’s pursuit of a more inclusive world through sport is an honourable and laudable one. However, in order to be effective, it must start with a rigorous review of its own policies and procedures to make sure that, as an organisation, it is leading by example. This means reviewing the event viability rule to make it more equitable and reinstating events for athletes with high support needs that were removed from the Paris program.

The Paralympics is changing the way people perceive disabilities

As Paralympians receive more medals, they are viewed by many people, including policy makers, as heroes who have overcome adversity. As potential “heroes”, Paralympic athletes are not only role models for other aspiring athletes, especially for those with a disability, but are also admired by society as a whole for their achievements.

'Boosting': How Some Paralympians Harm Themselves to Win

As many as a third of Paralympians with spinal cord injuries participate in "boosting," a self-harm practice designed to enhance athletic performance. But one researcher says the practice might be necessity, not cheating.

A Paralympian Races to Remove Obstacles for the Next Generation

“We’re on the cusp of breaking the barriers for Paralympic sport,” Tatyana McFadden said. “It’s taken a lot of hard work and dedication, trying to teach society what it means to be a Paralympian, that we’re not any different, that we’re just like the Olympians, with the same training sites, sponsorships, medals and venues.”

A star athlete heads to Rio to keep Paralympians healthy

“The legacy I want to leave is that we progress our knowledge around how to enable Paralympian athletes to continue competing in a safe and healthy way.” In addition to keeping them safe, she said, “we’re showing the world that these are real athletes that have trained their whole lives for this opportunity.”

Has the Time Come for the Olympics and Paralympics to Merge?

Athletes are asking if it's time for the Olympics and Paralympics to merge. We spoke to competitors on both sides to gauge their feeling on the debate.

How The Paralympics Came To Be: Remembering The International Stoke Mandeville Games

Before the modern Paralympics, there were the International Stoke Mandeville Games. They were born out of a world at war, and changed perceptions of disability for good.

I'm really proud to be a part of this campaign, though. You hear about rare diseases and weird things happening to people on Oprah and Dateline and you just never think it's going to happen to you. And then come to find out you actually could've protected yourself against it. To me it seems like a no-brainer.

Technology matters in the Paralympics, but the athlete matters more

The role of technology in sports is always a hot issue, but is perhaps more present when it comes to the Paralympics because of the more visible connection between person and machine.

The Competitive World of Blind Sports

From casual recreation to the Paralympics, a growing number of programs are helping visually impaired people flex their athletic muscles.

Paraplegics were depressed and discarded. Then one doctor had an idea: Let them play sports.

In the very professional world of Paralympic sport, athletes often train alongside Olympic athletes, sharing expertise, know-how, fitness plans and coaches. Yet knowing how much is too much for disabled athletes is crucial.

Skiing has always been a trademark sport of winter games, Paralympic or Olympic. In fact, the first winter competition held for people with disabilities, in 1948, was an internationally competitive three-track skiing contest. Today, the Paralympic Games ski-print the slopes with two main skiing events: Nordic skiing and Alpine skiing. In popularity, Paralympic ice sled hockey—with its aggressiveness, competitiveness and parallels to Olympic ice hockey—draws the largest crowd of spectators. Wheelchair curling slides into the lineup this year, adding a new element to the Games.

When the Paralympic Games begin in Tokyo on Aug. 24, more than a dozen athletes—sprinters, long-distance runners, cyclists, long-jumpers, table tennis players—will compete wearing prosthetics made by Össur, a company itself founded by an amputee.

How Training for the Paralympics Became a Full-Time Job

The delegations ruling the medal table at the Paralympics share a common trait: During the past decade they decided to invest the resources necessary to afford their athletes the same respect, coaching, equipment and opportunities that able-bodied athletes receive. From the Wasatch Range in Utah to the Canadian Rockies and the Korean Peninsula, they have transformed what had recently been a modest endeavor into a professional pursuit.

“As an athlete and female entrepreneur, I want to continue to use my platform to represent the possibilities in and out of sport. We have been able to create a lot of change and momentum behind not only Adaptive Action Sports as a brand, but adaptive action sports as a community.”

The Paralympics Got Postponed. A Retired Champion Got an Idea

When I heard that they were postponing the Paralympics for a full year I really asked myself if I should miss this opportunity. I don’t want to sound like I am taking advantage of something bad happening, but this is something I really wanted to do. I want to swim again. I want to compete again. I want to be a part of a team.

Women Paralympians Being Left Behind In Covid-19. Can Philanthropy Support Them?

The success of 2012 London Paralympic Games was a turning point in disability sport, though momentum has stalled. In 2018, the number of disabled people participating in sport has dropped by 10% since 2012. Covid-19 has no doubt posed fresh challenges to the sector, but philanthropy can play an important role to support these athletes in their endeavors.

Enough of those stupid political conventions! It’s time for the Olympics! Or more to the point, the Paralympics, the quadrennial world stage where athletes with disabilities can speak the common language of sports and excel in ways that, for the last fifty-plus years, has reaffirmed the obvious – we are just like you.

We are the British Paralympic Association, or the BPA. As the National Paralympic Committee (NPC) for Great Britain, it is our responsibility to select, prepare, enter, fund and manage the Great Britain and Northern Ireland team at the Paralympic Games. This team is known as ParalympicsGB.

The USOPC is focused on protecting, supporting and empowering America’s athletes, and is responsible for fielding U.S. teams for the Olympic, Paralympic, Youth Olympic, Pan American and Parapan American Games, and serving as the steward of the Olympic and Paralympic movements in the U.S.

Path to Success is supporting women in disability sport as they seek to achieve their dream of winning a Paralympic Medal.