Where in health am I? : Home / Health Cloud / Public Health / Organ Donation / Cadavers

You are a person and then you cease to be a person, and a cadaver takes your place - Mary Roach 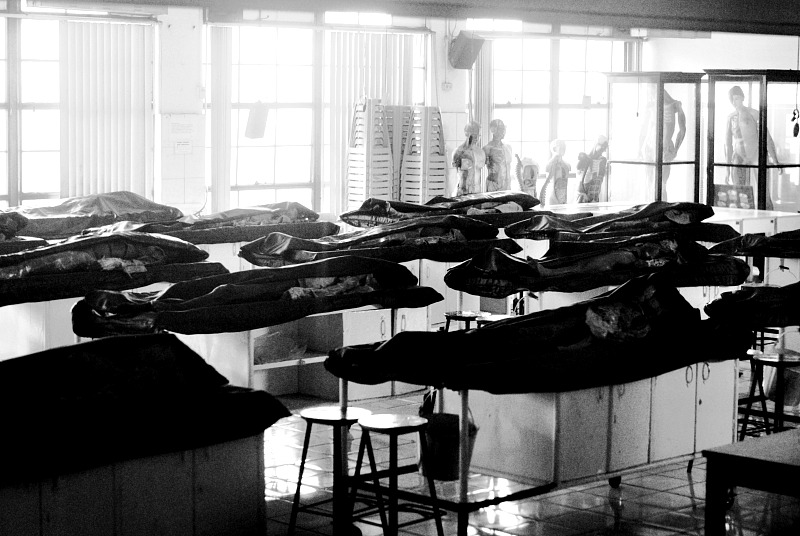 The Secret Lives of Cadavers

The federal government does not monitor whole body donations in the United States, but researchers estimate each year fewer than 20,000 Americans donate their bodies to medical research and training. While organ donation is a point of pride, body donation is often stigmatized.

Most people have only a vague notion of what “body donation” even means. The thought alone frightens, or even disgusts, many people. And scandals involving the illegal sale of body parts, and other snafus, have inspired distrust in body donation programs.

But a closer look reveals the process as both strange…

Giving Back an Identity To Donated Cadavers

Bodies, donated either by the deceased or survivors, are whisked away quickly after death, so many families have welcomed the chance to meet with the students dissecting their loved one's body, and to participate in an end-of-semester memorial service.

Learning Anatomy in a Digital Age

Medical students at Columbia University are using digital technology to breathe new life into a process hundreds of years old: dissecting a cadaver from head to toe.

Cadavers and Curios from the Dawn of Modern Medicine

How Cadavers Made Your Car Safer

Cadavers have been essential to making driving safer since the 1930s, when researchers at Wayne State University threw a body down an elevator shaft to determine the forces it could endure. Every part of a car touching on safety — from steering columns and laminated windshields to side-impact air bags — drew from tests with cadavers to ensure they work.

The history of autopsy and dissection of human bodies in the United States may seem like an innocuous topic, a necessary means to study life and its inevitable end. But in the 19th century, the vast majority of people who were dissected and autopsied were socially and economically marginalized groups.

Learning Empathy From the Dead

The first-year dissection is often an experience that teaches medical students to emotionally detach from their patients. By forcing future doctors to learn about the lives of their cadavers, some medical schools are trying to reverse the effect.

Living Cadavers: How the Poor Are Tricked Into Selling Their Organs

It may sound reasonable, paying for an organ from someone who could use the money more than an intact anatomy. But the real picture is grim. In a research paper published last week in Medical Anthropology Quarterly, Michigan State anthropologist Monir Moniruzzaman recounts the nearly 15 months he spent doing fieldwork in Bangladesh, where he infiltrated the illegal organ trafficking network. What he saw there he describes as nothing short of exploitation.

Top medical schools are cutting out cadavers from their curriculums, dismaying traditionalists who insist every future doctor needs to poke around a dead person before touching a live one. But administrators say their students are just too overloaded to take on the tedious chore of dissecting a human body.

So maybe synthetic cadavers will catch on in a big way — or maybe they won’t. But no matter how you slice it, they certainly aren’t the kind of thing we’d like to cuddle up with.

There were other problems with this method, besides the obvious ones: Cadavers do not come in standard shapes, and in crashes they don't behave like the bodies of living people. Pigs were also early test subjects.

At the end of the year, we hold a memorial ceremony, giving thanks to the friends of families of those who donated their bodies to the Anatomy Department at Loma Linda. Throughout the serene program, many students delivered moving testimonies of their experiences in the cadaver lab.

The Unexpected Link Between Cadavers and Careers

If you happen to be in need of human cadavers, you'll have more success targeting married nursery school teachers than, say, married cowboys or firefighters.

The Virtual Reality App That Could Do Away With Medical Cadavers

What Is It Like for a Medical Student to Cut Open a Body for the First Time?

We all become corpses. We can only hope that there will be someone who loves us enough to tell our stories at least one more time.

The Secret Lives of Cadavers

When people die and leave their bodies to science, it can result in much more than a simple organ donation.

MEDCURE connects people wanting to donate their bodies to science - WHOLE BODY DONORS - with the physicians and anatomical researchers that are uncovering tomorrow’s medical breakthroughs.