Where in health am I? : Home / Health Cloud / Professionals / Careers / Osteopathic Medicine

Knowledge is not inborn; it is acquired and it grows - William A. Kuchera DO, Professor, Kirksville College of Osteopathic Medicine 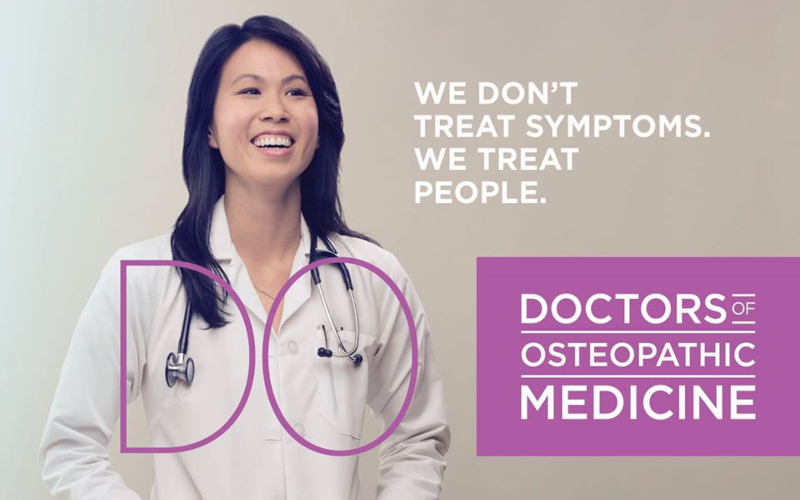 image by: Doctors That DO

MD vs. DO, What’s the Difference?

No matter what kind of doctor you want to be, you should to talk to as many practicing physicians (MD and DO) as you can. If you’re looking for a DO, try contacting one out of the telephone book. Most osteopathic physicians understand that many people have a limited knowledge about osteopathic medicine and will be willing to talk to you. Ask candid questions about their professional relationships with other physicians in the community and their residency experiences.

Realize that you have a choice in what kind of physician you become and be a smart consumer of your medical education. Don’t rely solely upon any single person’s opinion, including my own. Instead, talk to as…

The American Association of Colleges of Osteopathic Medicine (AACOM) represents the 33 accredited colleges of osteopathic medicine in the United States.

Which Is The Best Path To Medicine: MD Vs. DO

The majority of physicians in America are MDs (Doctor of Medicine), but a growing number of medical students are choosing to go the route of DO (Doctor of Osteopathic Medicine) instead. Many students are probably wondering what the differences are between MD and DO, and if one is better than the other.

After coming across what was in my opinion a rather biased and poorly-researched article at Forbes.com, “Osteopaths Versus Doctors” by Steven Salzberg, I felt compelled to set the record straight. As an osteopathic physician myself, I realize that there is a lot of misinformation out there about a variety of non-M.D. medical practitioners, but to question whether an osteopath is a qualified doctor strikes me as arrogant and ill-informed.

The sad reality is that there is a not so subtle and in many cases flagrant prejudice against DOs. Simply put, MDs and MD institutions discriminate against DOs. Hiring practices in many states or regions discriminate against DOs. I heard of a case recently where there was a sick patient on an airplane flying domestically, not foreign, and the responding doc was a DO. When the doc said we have to go down now in the best interest of the patient the pilot refused because the doc was “just” a DO.

DO vs MD: Similarities, Differences, and Which One is Better

While the majority of doctors in the US have MDs (Medical Degree), others have DO degrees (Doctor of Osteopathic Medicine degree). Here, the similarities and differences between an MD and DO—and which one is best for you.

Does osteopathic medicine have a future?

This streamlining of residency programs could — in the long run — reduce costs significantly by eliminating duplicate efforts. Additionally, it could result in one set of uniform regulations for all physicians, rather than separate regulations for M.D.s and D.O.s.

Osteopathic medicine and the growth of D.O. graduates as physicians

Osteopathic medicine has enjoyed the exponential growth over the past three decades while M.D. schools decided to remain stagnant.

Osteopathic medicine and the growth of D.O. graduates as physicians

The landscape of healthcare delivery has changed so drastically over the past three decades with the proliferation of allied health professions, increased in medical specialization, managed health care, and technology advancement.

Let me start by acknowledging that some osteopaths (DOs) are probably better doctors than some MDs. That’s hard to deny, given that some MDs are outrageous promoters of pseudoscience. (I’m thinking here of Andrew Weil, one of the biggest promoters of “alternative” medicine, and an even bigger promoter of himself. Actually he and Joseph Mercola have a lot in common — both have websites selling all kinds of unproven treatments as well as their books and DVDs.)

Osteopathy in the 21st Century

In the end, what is the difference between allopaths and osteopaths? In today’s healthcare culture, the answer is very little. Osteopaths have the ability to utilize manipulation to treat disease in addition to conventional medical practice, but very few do so.

Osteopathic schools turn out nearly a quarter of all med school grads.

The Difference Between D.O. and M.D. Degrees

A question many medical school applicants ask themselves–or are asked by premedical advisers–is whether to apply to allopathic (M.D.) or osteopathic (D.O.) schools, or to both.

Where to Pursue Your D.O. Degree - D.O. Medical School Directory

MD vs. DO, What’s the Difference?

Realize that you have a choice in what kind of physician you become and be a smart consumer of your medical education. Don’t rely solely upon any single person’s opinion, including my own. Instead, talk to as many different people as you can.

Our goal is to provide you with up to date, relevant information about osteopathic medical schools and osteopathic medicine. If you ever have any questions about schools please leave us a comment and we will get back to you as soon as possible.

Osteopathic medical schools admit many nontraditional students. Typically, these students come to osteopathic medicine as a second career from an amazing number of backgrounds.

From the first days of medical school, DOs are trained to look at the whole person and integrate them into the health care process as a partner. They see each person as more than a collection of body parts that may become injured or diseased. Osteopathic medical students receive classroom training in communicating with patients, and they practice these skills with simulated patients. Because of this whole-person approach to medicine, approximately 60% of all DOs choose to practice in the primary care disciplines of family practice, general internal medicine, and pediatrics.

To be good at this job you will also need to be a good listener and have a genuine desire to help people. You will need to be physically fit.

Osteopathic medicine degree programs, like traditional medical education programs, are 4-year graduate programs. They cover the subjects of human anatomy, physiology, microbiology, neuroanatomy and more, with advanced instruction in the musculoskeletal system. Student doctors complete clinical rotations in general practice and in specialty areas to gain hands-on experience. Admission to osteopathy programs is competitive. In 2011, the American Osteopathic Association accredited only 26 schools in the nation.