Where in health am I? : Home / Health Cloud / Give & Share / Migrant, Refugee & Immigrant 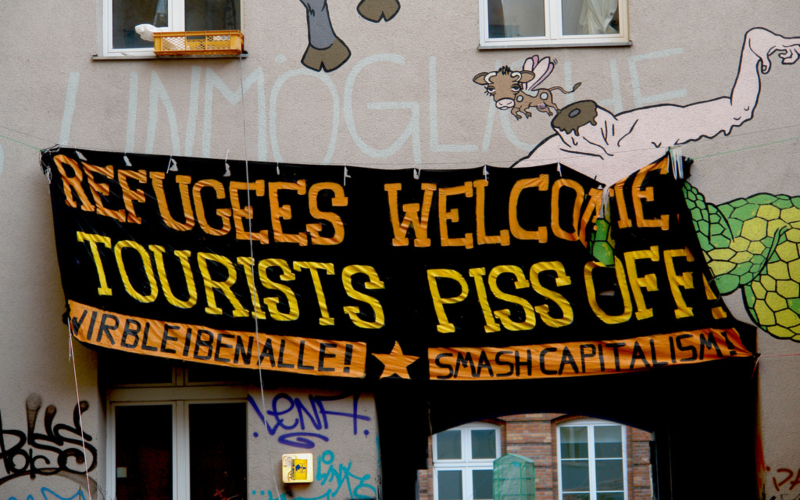 Improving The Lives Of Refugees By Harnessing Their Artisanal Skills

As of May 2018, over 25 million individuals worldwide are refugees – people who have been forced to leave their countries due to persecution, war, or violence. For many, the UN Refugee Agency (UNHCR) is their only form of legal protection. In 2017, UNHCR started the MADE51 project, an initiative which attempts to address the needs of these displaced peoples in a novel, considered way.

MADE51 recognizes the heritage artisanal skills that many refugees bring with them as they flee their homes. Helping people harness their traditional talents by connecting them with international designers and local social enterprises, MADE51 brings modern, innovative refugee-made products to the global…

How You Can Help Refugees Around the World

Meeting refugees’ day-to-day needs is vital, but aid workers also urge donors to think about supporting charities trying to solve problems that will help families over the longer term.

Kiva Is Really A Crowdfunded Bank For Refugees And Other 'Unbankables'

You’ve probably heard of Kiva, but if you aren’t among the 1.7 million people who have made loans on the platform, you may not really know what it is. This crowdfunding platform is, in effect, a bank funded by people who lend their money with an expectation of losing only a little, to 2.9 million people who stand to gain a lot.

This charity in athens is using skateboarding to help refugees

I donated money to RAICES before the campaign even started, and it’s been amazing to watch as this formerly obscure nonprofit has achieved a level of visibility that thousands of much older and more established organizations can only dream of.

‘What About the Refugees?’ The U.S. Is Doing More Than Anyone

No country has invested more in protecting, housing, feeding and caring for Syrian refugees than the U.S. We have provided nearly $6.5 billion in emergency assistance for Syria since the start of the crisis. Inside Syria, some four million people benefit from U.S. assistance for essentials like food and shelter every month.

Malala is a household name, but do you know these eight women serving refugees? Learn more about their awe-inspiring work in honor of World Refugee Day, observed around the globe on June 20.

Even if you’re not an elected official, you have a role to play in reversing the separation of thousands of migrant children from their families. Here are a few ways to do that...

How to Help in a Global Refugee Crisis

Donors who want to help face questions familiar to aid organizations: How does one most effectively deploy limited sums of money to help the most people? Where is the need most dire?

How to help Syrian refugees

Quartz has assembled a list of nonprofit organizations that support Syrian refugees by providing shelter, food, educational opportunities, medical supplies, emergency assistance, or general donations. The list is broken down by organization type: those that are large, international groups or umbrella organizations; those focused specifically on relief for children; those operating in Europe; those operating in countries neighboring Syria; and those with a religious affiliation.

How You Can Help Refugees in the United States

If you had tens of thousands of dollars to spend to help refugees who recently arrived in the United States, you might think it would be easy to give it away to an organization that could assist. But that hasn’t been the experience of Tom Smith, who with his family and another one hopes to sponsor or somehow support one or more refugee families. He called some agencies he read about in newspaper articles but struggled to find the right person to talk to. On one occasion, he did not even get a return phone call.

One Startup’s Quest to Save Refugees With Virtual Reality

The research shows that VR can augment empathy—but it can’t necessarily create it outright.

The mental-health crisis among migrants

The refugees and migrants surging into Europe are suffering very high levels of psychiatric disorders. Researchers are struggling to help.

The Refugee Crisis: 13 Things You Can Do To Help

Sometimes there’s nothing we can do – or we feel that way. This is not one of those times. Here are 13 things you can do, today, from anywhere in the world. Maybe you’re not in a position to do all of them, but why don’t you pick one or two to start with.

Improving The Lives Of Refugees By Harnessing Their Artisanal Skills

As of May 2018, over 25 million individuals worldwide are refugees – people who have been forced to leave their countries due to persecution, war, or violence. For many, the UN Refugee Agency (UNHCR) is their only form of legal protection.

Often, it can feel totally impossible for one individual to contribute to a global or national crisis. But some of the easiest and most effective ways to impact a humanitarian crisis are to volunteer or to donate.

3 ways you can donate to help Syrian refugees

As a nation, the most important thing we can do to help the refugees is to let more of them come to the United States. But as individuals, we can also provide financial resources to alleviate the suffering of people trapped in refugee camps or struggling to adjust to new lives far from the places they used to call home.

If you're looking for ways to support the hundreds of immigrants being detained and help reunite separated parents with their children, consider donating to these seven organizations.

The Immigrant Defense Project promotes fundamental fairness for immigrants accused or convicted of crimes. We seek to minimize the harsh and disproportionate immigration consequences of contact with the criminal justice system.

We envision a world where all people hold the power to create opportunity for themselves and others.

War and oppression have devastating consequences on the freedom and well-being of innocent children caught in the crossfire. Because these children deserve free, full lives, we're working with you to change that.

A tech community response to the European refugee crisis.

Border Angels is an all volunteer, non profit organisation that advocates for human rights, humane immigration reform, and social justice with a special focus on issues related to issues related to the US-Mexican border.

International medical humanitarian organization working in nearly 70 countries to assist people whose survival is threatened by violence, neglect or catastrophe. In 1999, MSF received the Nobel Peace Prize. We are independent, neutral and impartial.

InterAction works to be a leader in the global quest to eliminate extreme poverty and vulnerability, strengthen human rights and citizen participation, safeguard a sustainable planet, promote peace, and ensure dignity for all people.

Together with our partners, we have helped thousands of children find a safe haven and freedom from fear, many for the first time in their young lives. Most are fleeing some of the most dangerous countries in the world.

We strive to be an efficient organization, relying on volunteer attorneys and interns for many of our cases. We utilize all in-kind and monetary donations to provide better services to our clients, and we constantly strive to be on the frontlines of advocating for immigrant rights.

MADE51 is bringing beautiful, refugee-made products to a global market. A new initiative from UNHCR and its partners.

is a global team of humanitarians who partner with communities, corporations and governments to transform lives around the world.

Heartland Alliance's National Immigrant Justice Center (NIJC) is dedicated to ensuring human rights protections and access to justice for all immigrants, refugees and asylum seekers. With offices in Chicago, Indiana, and Washington, D.C., NIJC provides direct legal services to and advocates for these populations through policy reform, impact litigation, and public education. Since its founding three decades ago, NIJC has been unique in blending individual client advocacy with broad-based systemic change.

Neta is one of the fastest-growing independent media platforms led by people of color in the US. Our vision is to inspire and move people to change the world by creating content that amplifies the voices of border residents in the Rio Grande Valley along the Texas-Mexico border.

Every two seconds, someone like Ada is forced to flee their home in search of safety. Families are leaving everything behind to escape war, famine, and poverty. You can help.

RAICES is a 501(c)(3) nonprofit agency that promotes justice by providing free and low-cost legal services to underserved immigrant children, families, and refugees in Texas.

The Refugee Council is one of the leading charities in the UK working directly with refugees, and supporting them to rebuild their lives. We also speak up for refugees using our direct work as an evidence base, and ensure refugees have a stronger and more influential voice in decisions that will affect them.

In the U.S. and around the world, we give children a healthy start in life, the opportunity to learn and protection from harm. When crisis strikes, we are always among the first to respond and the last to leave. We do whatever it takes to save children, transforming their lives and the future we share.

To provide crisis humanitarian relief and plant the seeds of sustainable development for the people of Syria.

The Syrian American Medical Society (SAMS) Foundation is a global medical relief organization that is working on the front lines of crisis relief in Syria, in neighboring countries, and beyond to save lives and alleviate suffering. SAMS proudly provides medical care and treatment to every patient in need.

Children first. UNICEF USA does whatever it takes to save and protect the world's most vulnerable children.

We advocate for the rights and protection of women, children, and youth fleeing violence and persecution.

World Vision is a global Christian relief, development and advocacy organisation dedicated to working with children, families and communities to overcome poverty and injustice.

The mission of the Young Center for Immigrant Children’s Rights is to promote the best interests of immigrant children with due regard to the child’s expressed wishes, according to the Convention on the Rights of the Child and state and federal law.