Where in health am I? : Home / Health Cloud / Business of Health / Health Insurance / Single Payer Plan 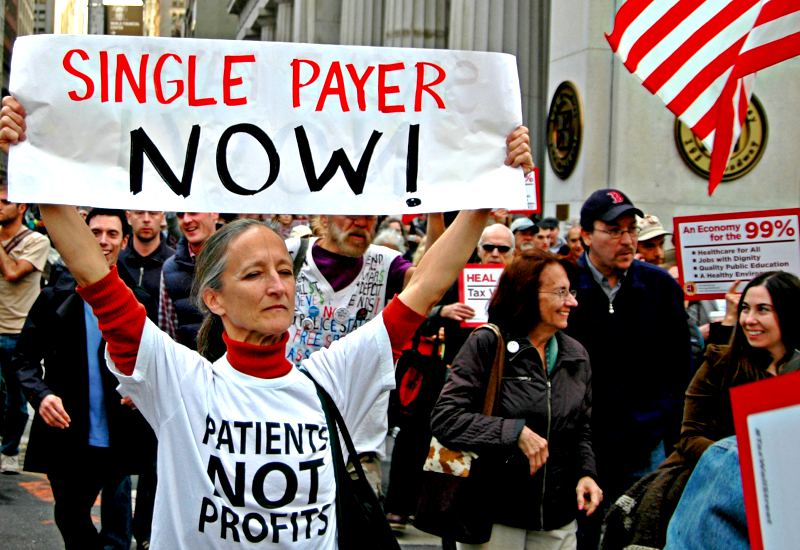 Single-Payer NHI: The Only Way the US Can Ever Get Affordable Health Care

Is Single payer finally coming to the U.S.?

Now that Bernie Sanders has brought forward his progressive agenda, including real health care reform through a single-payer universal Medicare for all program, the knives are out from the Republicans as well as Hillary Clinton to distort and discredit this option with false information and voodoo numbers.

Going forward, we have three basic alternatives to further reform our health care system: continue with the Affordable Care Act (ACA) with improvements as needed (which Hillary supports with barely a hint of what those changes might be);  the Republican "plan," including repeal of the ACA and emphasizing market-based "fixes",…

True believers of Medicare for All don’t want to hear that single-payer health care will be very difficult to achieve in the U.S. Entrenched medical interests will lobby against it; Congress may never have the votes. If it ever does come to pass, hospitals may close. But the committed are not daunted by these obstacles. To them, there’s only one response to the question, “Can we really do single-payer here?” Yes, we can.

President Trump is benefiting from single-payer, single-provider health care. We all should

Unlike the vast majority of Americans who get sick, President Trump is reaping the benefits of single-payer, single-provider health care. He doesn’t have to deal with networks, deductibles, or co-pays at Walter Reed National Military Medical Center. The president will not face the familiar onslaught of paperwork, the confusing “explanations of benefit,” or the ongoing bills that distract so many Americans as they attempt to recuperate from their illnesses.

Medicare for All’ Is a Fantasy

But the surge in support for the idea gives Republicans the chance to offer a coherent alternative.

Single-Payer - Good, Bad, and Ugly of the Canadian System

It is unlikely the system will change. Most people who actually vote are happy that major illness is covered and are less concerned about chronic care. Physicians like the simplicity of getting paid and fee-for-service. Most Canadians are content that they may not be the best in the world, but at least they're better than the U.S.

Terms like "universal healthcare," "Medicare for All," and "single-payer" are typically substituted for universal coverage as if they all mean the same thing and everyone understands the reference. They don’t, and the big distinctions are critical for any debate.

'We need fundamental changes': US doctors call for universal healthcare

How long until they accept that the only way to guarantee it is through single-payer?

Are You Sure You Want Single Payer?

“Medicare for all” is a popular idea, but for Americans, transitioning to such a system would be difficult, to say the least.

Bernie Sanders: Why We Need Medicare for All

This is a pivotal moment in American history. Do we, as a nation, join the rest of the industrialized world and guarantee comprehensive health care to every person as a human right? Or do we maintain a system that is enormously expensive, wasteful and bureaucratic, and is designed to maximize profits for big insurance companies, the pharmaceutical industry, Wall Street and medical equipment suppliers?

If we in the medical profession want the public to believe that our commitment to patients is our highest priority, then we need to take the lead in combating the forces that threaten this.

This proposal would kneecap California’s economy and saddle millions with the life-threatening wait times, rationed care and out-of-control costs that plague all single-payer systems.

Can a ‘Single Payer’ Health System Work in America?

Every other developed country offers some sort of coverage for all of its citizens. We do not. This is immoral and should be the line-in-the-sand feature of any health care plan under discussion.

For Sanders to realize his vision for single-payer health care, he’d have to overcome even greater resistance than Obamacare’s architects faced. And Sanders has offered no reason to think he could do that, which is something Democratic voters might want to keep in mind.

How Single-Payer Health Care Could Trip Up Democrats

Many Democrats giddy from their recent health policy successes are starting to reach enthusiastically for a mountaintop goal: establishing a single-payer system for all Americans.

Despite the advent of Obamacare, most estimates indicate that about 50 million Americans remain uninsured. So, why can't the United States insure all its citizens like the rest of the industralized world?

ObamaCare, Is There a Fix?

It’s not defunding ObamaCare or granting everyone the current ‘federal worker option’ or even socialized medicine. Just ask our neighbors, the Canadians.

Obamacare: Good Medicine, Bad Politics or the Other Way Around?

Insuring every U.S. citizen by 2014 is laudable but not by creating a bigger and more convoluted mess. However, there is a way out and it's next door!

Single-payer isn’t the only progressive option on health care

There are several routes to universal coverage — some more politically feasible than others.

Single-payer health care is all the rage. At the start of the Obama presidency, the push for a Canadian-style, single-payer, taxpayer-funded universal health system was widely seen as a cause championed only by the hopelessly naïve. Now, as the New York Times reports, support for single-payer is emerging as the consensus position among congressional Democrats...

The Sanders Single-Payer Plan Is No Miracle Cure

We recently conducted an analysis of international health systems and concluded that single-payer advocates are substantially overstating the prevalence and success of such systems. While many other countries have universal health systems and feature more government control over individual health care decisions, almost none are actually single-payer. And all of them are wrestling with largely the same challenges Americans are, making different but equally difficult trade-offs on cost, quality and access.

We Have to Ration Health Care

Medicare for all would be a much better plan if it acknowledged that simple reality.

What If America Had Canada's Healthcare System?

What if Canada moved here? Specifically, what if its healthcare system were to pack up, migrate southward, and rain its single-payer munificence over America, for a change?

There is nothing “simple” about any of this. The Medicare program, with its tens of thousands of pages of rules and regulations and guidelines, demonstrates that painful fact daily to any Medicare patient struggling with a Medicare claims denial, or any doctor or any other medical professional wrestling with Medicare paperwork. Meanwhile, forget personal freedom.

‘Medicare for All’: Is It Popular? And Is It the Same as Britain’s System?

Mr. Sanders claimed that “the majority of the American people” want Medicare for all, citing an April poll by The Economist/YouGov in which 60 percent of Americans agreed that Medicare should be expanded to cover everyone. But this appears to be the high end of support.

Here's What Single-Payer Advocates Don't Want You To Know

Single-payer is popular because its backers talk solely about its feel-good aspects -- namely, “free” health care for everyone. Who could oppose that?

Why A Government-Run, Single-Payer Healthcare Approach Is Doomed To Fail

It sounds great, almost too good to be true: Coverage for all with lower costs, a broad choice of providers and minimal paperwork. The problem is that it won’t work.

Single-Payer NHI: The Only Way the US Can Ever Get Affordable Health Care

Now that Bernie Sanders has brought forward his progressive agenda, including real health care reform through a single-payer universal Medicare for all program, the knives are out from the Republicans as well as Hillary Clinton to distort and discredit this option with false information and voodoo numbers.

Single-payer countries tend to get more favorable ratings than the American health-care system.

Healthcare-NOW! is a national coalition fighting to win healthcare as a human right through a single-payer healthcare system. We will win by building a social movement of patients, workers, providers, employers, and others who believe that access to healthcare is basic to human dignity, and we will overcome the power of the healthcare industry one community at a time.

Americans from across the country have helped in a wide variety of ways during the development of this Medicare for All website. Our most recent efforts are making it easier to participate in the campaign to get strong support in the U.S. Congress for the establishment of Medicare for All.

Physicians for a National Health Program

Physicians for a National Health Program is a non-profit research and education organization of 20,000 physicians, medical students and health professionals who support single-payer national health insurance.

Single Payer Now is a grassroots advocacy group in California. We educate and organize activists to advocate for health care without the insurance industry.

HEAL California is about having a healthcare system that keeps us well while compassionately taking care of us when we’re not. This is far from what we have. When we most need help, we face endless paperwork, sky-high costs and a faceless, unresponsive non-system. Everything is way harder and more expensive than it needs to be. We need a simple, paperless, coordinated, affordable, transparent and accessible system.

Vermont Health Care For All

www.VermontforSinglePayer.org is the website of Vermont Health Care For All (VTHCA), a Vermont non-profit corporation (501(c) 3), established in 2003 with the purpose of educating the public about the advantages of a universal publicly financed health care system for Vermont.