Where in health am I? : Home / Health Cloud / Business of Health / Health Insurance / Medicare / Medicare For All

Health care should be a right; it should never be a privilege. We should have Medicare for all in this country - Kirsten Gillibrand 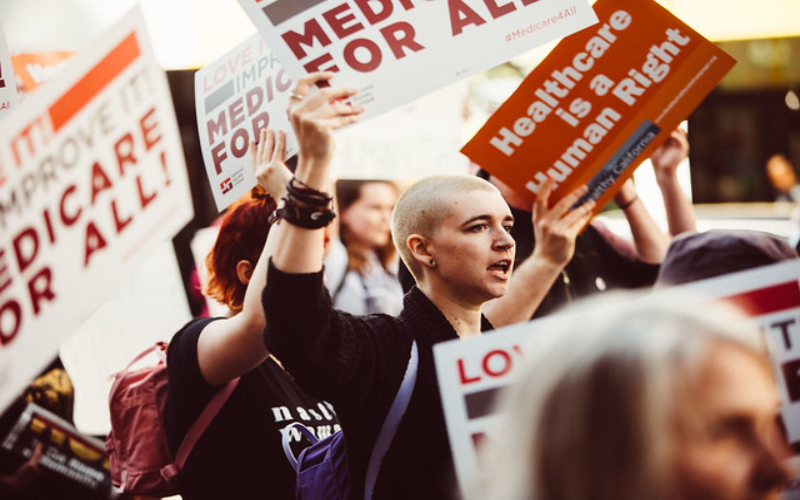 The Case for Medicare for All

A single-payer health-insurance system can finance good-quality coverage for all U.S. residents while still reducing overall health-care spending by roughly 10%, according to a study I co-authored last November. All Americans would be able to get care from their chosen providers without having to pay premiums, deductibles or copayments.

Other countries currently provide good health care to residents at a fraction of the U.S. cost. As of 2017, the U.S. spent $3.3 trillion on health care—17% of gross domestic product. Germany, France, Japan, Canada, the U.K., Australia, Spain and Italy spent between 9% and 11% of GDP on health care. Yet some measures—like those based on the amenable…

We're fighting for a health care system that would end health disparities, effectively control costs, and assure that everyone has equal access to care.

Medicare-for-All Is Not Medicare, and Not Really for All. So What Does It Actually Mean?

The role of insurance companies would be vastly reduced. By one estimate, as many 2 million people who are paid to process insurance claims or argue about them would lose their jobs.

The Congressional Budget Office on Thursday released a report examining the costs associated with universal healthcare proposals that are based on Medicare's fee-for-service program and found that implementing a single-payer health insurance program in the United States would not only guarantee coverage for every person in the country but would also reduce overall healthcare spending nationwide. What this means, Bruenig said, is that other studies estimating the effects of a single-payer system on administrative costs are "missing hundreds of billions of dollars of savings per year."

What 'Medicare for All' means, politically and practically

Many of those pushing for Medicare for All believe that health care is a human right, and many supporters believe that getting more people into the Medicare system can help rein in growing costs in the US health care system. It's worth noting that Medicare is quite popular as it stands now.

As calls for radical health reform grow louder, many on the right, in the center and in the health care industry are arguing that proposals like “Medicare for All” would cause economic ruin, decimating a sector that represents nearly 20% of our economy.

What the US can learn from other countries’ health systems.

Taiwan’s single-payer success story — and its lessons for America

In Taiwan, everybody is covered. The Taiwanese health care system is built on the belief that everyone deserves health care...

Bernie Sanders Went to Canada, and a Dream of ‘Medicare for All’ Flourished

The Vermont senator has staked his presidential campaign, and much of his political legacy, on transforming health care in America. His mother’s illness, and a trip he made to study the Canadian system, help explain why.

Build Your Own ‘Medicare for All’ Plan. Beware: There Are Tough Choices.

Here's the Real Deal on 'Medicare for All'

The power of the establishment's money and lies wilts in the face of the moral imperative that is at the heart of Medicare for All: Everyone deserves, as a human right, affordable access to quality health care.

How Americans Split on Health Care: It’s a 3-Way Tie

Supporters of Medicare for all were more approving of socialism and showed stronger support for the notion that the government should be responsible for ensuring universal access to health care for all Americans. When asked if they were comfortable paying higher taxes in exchange for health coverage for everyone, 79 percent said they would be willing, a substantially higher proportion than respondents in the other two groups.

Medicare for All: Definition and Pros and Cons

Second-largest doctors group in US endorses Medicare for All, public option

The Cost-Effectiveness of Medicare for All

It will wring out the duplicative and wasteful administrative costs of the free marketplace and provide powerful national negotiating leverage to stabilize medical provider and pharmacy costs.

‘Medicare for All’ Isn’t Medicare

Democrats mislead voters by appropriating the name of a popular program they actually seek to abolish.

t’s true that support for single payer declines as voters consider its cost and contemplate exchanging the insurance they have for something unfamiliar. The century-long quest for single payer has repeatedly foundered largely for that reason. Maybe 2020 will run true to form.

A single-payer advocate answers the big question: How do we pay for it?

Matt Bruenig on what he worries about — and what he doesn’t — for Medicare-for-all.

Senator Bernie Sanders introduced his Medicare for All Act of 2017 on Wednesday with the support of a slew of prominent Democratic senators. It’s a bold move: While progressives have long rallied around single-payer healthcare, many Americans tend to greet the prospect of health-care overhauls with trepidation. But Sanders thinks he has an answer to these fears.

Beto O’Rourke’s Health Care Proposal Is Not Medicare for All, but It Is Ambitious

Another advantage to Medicare for America is that it would be cheaper than single-payer, at least so far as the federal budget is concerned. There are no public cost-estimates for the bill yet. But it would almost certainly save Washington money compared to the Sanders approach, because it would not require immediately transitioning the entire employer-sponsored market onto a government health plan.

Democrats Love Medicare for All, They Just Don't Know What It Means

Medicare for all is a pleasing combination of words. People who are on Medicare, the government-run health insurance program available to virtually every senior in America, are generally happier with their plan than Americans on employer-provided private insurance. Expanding that popular program is such an obvious idea that it attracts an enormous amount of support in polls, even among Republicans.

Europe’s Alternative to Medicare for All

Consumers and the private sector drive the health-care systems in these countries, which accomplish exactly what Mr. Sanders and his supporters say they want—universal coverage, controlled costs, high quality and ready access. In contrast, Canada’s experience shows the dangers of the Medicare for All model.

Kicking the Tires on Medicare for All

The new class of Democrats is starting to put forth big, new reforms that would socialize health care. Those plans won’t pass, but our health writer Olga Khazan is here to explain why you should pay attention anyway. — Matt Peterson

Medicare For All: Is The U.S. Headed In That Direction?

Medicare for All would expand Medicare to all U.S. citizens and legal permanent residents and abolish the current system of employer-provided coverage.

The Awkward Debate About Ending Private Insurance Is Good for Democrats

Up until recently, most of the Democratic hopefuls for 2020 have gotten away with being vague about what they mean by Medicare for all. But keeping up the ambiguity is getting harder because journalists keep asking one very particular question: Do they, or do they not, want to eliminate private health insurance?

The Difference Between a ‘Public Option’ and ‘Medicare for All’? Let’s Define Our Terms

It can be mystifying when people call of these ideas “Medicare for all,” as some in the debate have been doing. A glossary of terms could make the debate less confusing. Let’s start with the basics.

This Is the Strongest Argument Against Medicare for All

A deep-blue state’s failure to enact a single-payer system shows why a national version is unlikely to succeed.

We Can Have Medicare For All -- If Both Parties Compromise

Fortunately, there are options. One viable way to proceed is what I call “Medicare Advantage for All” – to guarantee a right for anyone lacking insurance to purchase insurance under the Medicare Advantage program – a popular, relatively affordable program that is administered by private health plans.

We read Democrats’ 9 plans for expanding health care. Here’s how they work.

“Medicare-for-all” has become a rallying cry on the left, but the term doesn’t capture the full scope of options Democrats are considering to insure all (or at least a lot more) Americans. Case in point: There are currently more than half a dozen proposals in Congress, which all envision very different health care systems.

What Would ‘Medicare for All’ Do to Medicare?

But it would be a big change from the way Medicare works now. Hospital budgets would require a kind of government process that doesn’t exist now: a Medicare board that would decide the appropriate payment to every hospital and the set of priorities for hospital and nursing home capital improvements. The government would no longer set payment for each emergency room visit or knee replacement, but it would have to decide how much to pay one hospital versus another.

Why 'Medicare For All' Plays Well In Trump Country

‘Medicare for all’ could be cheaper than you think

I have been researching the economics of health care for four decades. While I prefer a more comprehensive universal health care plan that covers all Americans, a simpler version would be much more affordable – and maybe even politically possible.

‘Medicare for All’: The Impossible Dream

The Brits and Canadians I know certainly love their single-payer health care systems. If one of their politicians suggested they should switch to the American health care model, they’d throw him out the window. So single-payer health care, or in our case “Medicare for all,” is worth taking seriously. I’ve just never understood how we get from here to there, how we transition from our current system to the one Bernie Sanders has proposed and Elizabeth Warren, Kamala Harris and others have endorsed.

The Case for Medicare for All

But Medicare for All could also eliminate 19% of total health-care spending. The largest saving, about 9% of total system costs, would come from dramatically reduced administrative costs in contracting, claims processing, credentialing providers and payment validation—all of which would be unified under one federal agency. Private insurers spend about 12% of their collective budget on administration, while Medicare operates much more efficiently, with administrative costs at around 2%.

We demand that every progressive in Congress refuse to vote for Nancy Pelosi for Speaker of the House until she publicly pledges to bring Medicare for all to the floor of the House for a vote in January. Force the Vote!

Physicians for a National Health Program

Physicians for a National Health Program is a single issue organization advocating a universal, comprehensive single-payer national health program. PNHP has more than 20,000 members and chapters across the United States.