Where in health am I? : Home / Blogs and Commentaries / Celebrity Health / The Obsessive World of Howie Mandel

People with Obsessive Compulsive Disorder may be aware that their obsessions and compulsions are senseless or unrealistic, but they cannot stop themselves. Howie Mandel recently released an autobiographical account of his lifelong struggles with OCD

Have you ever wondered what a 'fist bump' is? How do you judge its intent? The fist bump offers a restrained greeting along with a touch of coolness. It’s aloof yet playful. The fist bump sends a more ambiguous message than the handshake, yet its meaning is less friendly than the good old high-five.

In most societies, a closed hand is viewed as hostile or confrontational and can lead to cultural misunderstandings among people who are not familiar with a closed hand greeting. Handshakes, in polite society, have typically represented affection, nonaggression, or a business deal completed. The fist bump breaks with hundreds of years of handshake tradition. So why is it so popular?

The modern fist bump became an accepted greeting in the late 90's, when it began to appear at sporting events and in beer commercials. "The fist bump is current, said Anslem Samuel, editor of hip-hop magazine The Source. "Each generation wants something of its own, and the fist bump makes the high-five seem corny". Since 2008 though, Barrack and Michelle Obama have been credited with making the fist bump cool. Remember the “fist bump heard round the world”? For the Obamas, it showed the world that they had a playful, intimate side.  It made you like them a bit more.  But they are not the only celebrities who use the fist bump. 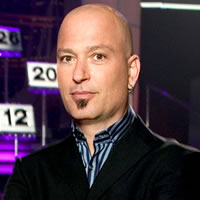 Howie Mandel has been quietly using the fist bump for most of his life. His reasons are not because he is trying to be super cool and trendy, but because he suffers from Obsessive Compulsive Disorder. OCD is a debilitating anxiety disorder that produces inescapable repetitive thoughts.

For Mandel, his OCD renders him terrified of germs.  The 54 year-old comedian and game show host talks about the reason for his signature fist bump greeting; "In my mind, my hand is like a Petri dish…[If I touched another hand] I would spend the day, as I have in the past, in the men's room rubbing and scrubbing and scalding. In my mind I'm always on the verge of death", he said.

OCD affects over 3 million adults and 1 million children and adolescents in the U.S. The disorder usually first appears in childhood, adolescence, or early adulthood. The symptoms and obsessions of OCD vary but may include: an irrational fear of dirt or germs, fear of causing harm to another, fear of making a mistake, fear of being embarrassed or behaving inappropriately, fear of evil or sinful thoughts, and a need for order or symmetry.

OCD sufferers may have only one symptom but typically suffer from several. Some of the most common compulsions include: repeatedly bathing, showering, or washing hands, refusing to shake hands or touch doorknobs, repeatedly checking things, such as locks or stoves, constant counting, mentally or aloud, while performing routine tasks, and eating foods in a specific order.

Obsessive Compulsive Disorder is a type of anxiety disorder that traps people in endless cycles of repetitive thoughts and behaviors. People with OCD are plagued by recurring and distressing thoughts, fears, or images that they cannot control. The anxiety produced by these thoughts leads to an urgent need to compulsively perform certain rituals or routines. The compulsive rituals are performed in an attempt to prevent the obsessive thoughts or make them go away.

Completing the ritual may help relieve the anxiety, however the OCD sufferer must perform the ritual again when the obsessive thoughts return. This cycle can progress to the point of taking up hours of the person's day and significantly interfering with normal activities. People with OCD may be aware that their obsessions and compulsions are senseless or unrealistic, but they cannot stop themselves, hence the name Obsessive Compulsive Disorder.

Mandel recently released, Here's the Deal: Don't Touch Me, an autobiographical account of his lifelong struggles with OCD. He talks about his first struggles.  As a child, he did not tie his shoes because of his fear of the germs the laces collected as they touched the ground.  To this day, he will not wear shoes with laces.

Like many of the 4 million adults who suffer from OCD, Mandel's obsession is with germs, but this can manifest itself in countless ways that trigger a silent loop of the question 'What if...' in his mind. "I'm not in control of my own mind. It goes places, and I cannot bring it back. The best description is that I feel incredibly busy in my own mind. . . . That busyness is sometimes torturous… It's all consuming".

Mandel has been married for over 30 years to Terry and together they have three children.  It seems odd that he was able to marry and create three children…Children are germ magnets and consequently Mandel is known to wear a surgical mask and rubber gloves when one of his family members are sick. Mandel also has an extensive list of rituals that he must follow everyday.  For instance, he won't touch money unless it's been washed.  He won’t touch car doors, and he avoids hand rails like the plague. "Hand rails are my enemy. I never go near a hand rail," he said.

Even Mandel's trademark bald head is this way by choice. "This feels so streamlined and so clean," he said. At times, his "irrational" fears can strike at the most inopportune moments. "The biggest fear I have is being triggered," he said. "And if I'm triggered and I get some sort of weird thought in my head that can't go, then my day is, is stopped. My life stops".

There's nothing wrong with having a little anxiety—to be somewhat fearful or anxious about something probably focuses you more, right? If you're a little worried you try harder. Anxiety can help to keep you alive in dangerous situations.  But too much anxiety can also be devastating. Mandel sums up his experience, “my anxiety, and I can't speak for other patients, is sometimes paralyzing. I can't think of one time where my OCD or depression has been triggered that it has enhanced what I was doing".