Where in health am I? : Home / Blogs and Commentaries / Celebrity Health / Survivor Samoa - Scariest Moment Ever

Be honest, how many of you sit at home on your soft, comfy couch with a glass of water watching Survivor and think 'I could totally do that! I do. It can’t possibly be as hard as their making it out to be. Yeah, the contestants look filthy dirty and lose some weight, but really, I thought it was just mugging for the camera.

I always though at the end of the day when the cameras were off everyone sat around a campfire roasting marshmallows, eating burgers, and possibly taking a shower before they retire to their 'real' sleeping quarters. The next morning, the costuming crew comes in, gets everyone dirtied up and the cameras start rolling again. 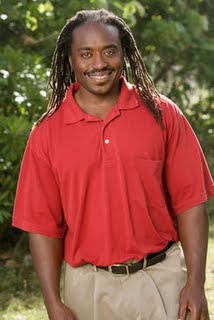 Apparently, I was really wrong.  The castaways are actually malnourished, sleep deprived, and in extreme cases, on the brink of death. The only luxuries the castaways are given are sunscreen and matches, nothing is planted on the island.  Anything else they need they either have to find or earn by winning a physical challenge. Who knew reality TV is sometimes real????  If you watch Survivor, you’ve probably watched a few exciting evacuations occur during previous seasons due to fire, infections, and injury.

But, Survivor Samoa is the first season to have not one, but two, castaways overcome by the difficulty of a physical challenge. Actually, not just overcome, but close to death.  One castaway, Mike Borassi, was evacuated because of dangerously high, uncontrollable, blood pressure and during a challenge event, filming had to be suspended because team leader, Russell Swan, was suffering from dehydration so severe it almost led to his death.

According to the show’s host, Jeff Probst, Survivor Samoa has by far the most difficult living conditions; drinking water is scarce on the island and the contestants are required to find and boil their own. That makes dehydration their number one health concern.  This season, the non-stop rain made it near impossible to start, much less sustain a fire which means the contestants were always cold, wet and unable to boil water for drinking or food preparation.

Probst adds, “I continue to remind people that Survivor is for real. You know, you hear “dehydration” and I think most people associate it with going out on a hike and you are a little parched and your friend says, “You’re dehydrated,”… you drink a little water and you feel better. So when you are stranded on an island in a pouring rain with no fire, it’s very different than a hike and forgetting your bottle of water. We aren’t giving them water off-camera. We don’t feed them. We don’t do anything to help them. We just watch”. Jeez…..

As Probst recounts his version of what happened to Russell Swan, he calls it, “The scariest thing I’ve ever seen. We get to the challenge and Russell is going at it and at a certain point he didn’t appear to be responding to his tribemates, but because he has a blindfold on, I couldn’t tell if he was just resting. I wasn’t sure what was happening and I’m always hesitant to jump into a challenge too quickly, but it became clear at a certain point that Russell was not responding and so we stopped the challenge and I called in medical and they took over”.

He continues, “Then my concern really heated up with Russell when he passed out a second time and I watched his heart rate drop 30 beats in less than a second — one or two at the most. They couldn’t get him to respond and they were slapping his face and chest, and for 7 or 8 seconds he didn’t respond and that was the most afraid I’ve ever been on this show. I thought we were losing him. I’m still affected by it this day”.  I’ll bet Swan is still affected too, because unfortunately, he was forced to leave and the show is continuing without him.

On average an adult loses more than 10 cups of water a day by sweating, breathing and eliminating waste.  Normally, you can replenish what you've lost through the foods and liquids you consume, even when you're active.  This makes dehydration avoidable; yet most people ignore the body’s initial symptoms which are thirst, decreased urine output, or abnormally dark urine. Symptoms of moderate dehydration are headache, muscle cramps, dizziness and fainting.

The symptoms of severe dehydration are lethargy or extreme sleepiness, seizures, confusion, weakness, and heart palpitations.  The symptoms become increasingly severe with greater water loss and can lead to something called Hypovolemic shock which makes the heart unable to pump enough blood throughout the body. This type of shock can cause organs to stop working and if left untreated, can cause organ failure, coma or death. Russell Swan is a lucky man; he exhibited most of the symptoms of severe dehydration and survived with little to no after effects.  He pushed himself to the brink and was able to walk away.