Where in health am I? : Home / Blogs and Commentaries / Celebrity Health / Don’t be a Scrooge! Santa is Watching

Hunger doesn’t discriminate. It can affect anyone—even those you’d least expect. Matt Damon is doing his part as an ambassador for ONEXONE dedicated to helping create a world where children can live safely and with dignity

What is your favorite holiday food? Turkey? Stuffing? Mashed Potatoes? Pumpkin Pie? Candied Yams? Fudge? Cookies? Egg Nog? Mine is stuffing soaked with gravy. Yumm! There’s always an abundance of foods on our holiday table, which means leftovers. Nothing beats leftovers! I love the late night run to the fridge for a big slice of pumpkin pie. My family is a bit odd when it comes to leftovers though. We call it the “1 day rule” which translates to - eat all the leftovers you want the day after the holiday because they’ll be gone the next morning. Wasteful, I know but it is the only way to ensure I don’t gain 15 pounds every year.

Lately though, I’ve been thinking about the amount of food we throw out during the holidays.  It seems especially wasteful now when there are so many people out there unemployed, barely able to feed their families everyday. What are they doing during the holidays?

Demand at food banks across the United States is up more than 30% in the last year alone. Hungry families depend on food banks and other charitable donations during the holiday season more than any other time of year. Unfortunately, this year the drop in charitable giving is the largest in more than 50 years leaving no doubt that the recession is having a negative impact on the families that depend on them.  Food banks are running out of food and because of the lack of donations more than 25 million adults and 17 million children (nearly one in four) in America will go hungry this holiday season.

Many people wrongly believe that the problems associated with hunger are confined to small pockets of society, specific parts of the country, or certain neighborhoods, but the reality is very different. Hunger often affects hard-working adults, children and seniors who simply cannot make ends meet and are forced to go without food. Statistically we all know or are in contact with people affected by hunger, even though we might not be aware of it. Unemployment, homelessness and hunger do not discriminate and most Americans are living one paycheck away from catastrophe.

Feeding the hungry is not just a moral issue but also a social issue. America is the land of plenty except for the 25 million low-income families that receive emergency food assistance every week. The contradiction of hunger in the midst of plenty is a threat to America’s future prosperity.  Children who are raised hungry face an uncertain future and typically become undereducated, poor adults.

It’s time to educate ourselves about America’s hunger problem and this holiday season, you can help. Here is a list of celebrities and charities that are doing their part to fight hunger.

Matt Damon with the African Childrens Choir at the ONEXONE Gala 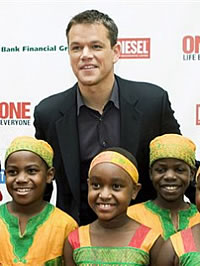 ONEXONE - One of the many programs that ONEXONE sponsors is The BackPack Program. ONEXONE believes that the war on child hunger costs only pennies a day and their goal is to feed kids here at home -- one by one.

The BackPack program was developed at the Arkansas Rice Depot, after a school nurse asked for help because hungry students were coming to her with stomachaches and dizziness. She discovered that many of these students were not eating from the time they received their last free school lunch on Friday until their next free meal on Monday.  Sadly, these children were going hungry over the weekend. ONEXONE funds the local food bank that provides school children with groceries in non-descript backpacks to carry home so they can eat over the weekends.

FEEDING AMERICA - David Arquette is the entertainment council’s chairman for Feeding America which is the nation's leading domestic hunger-relief charity.  Their mission is to feed America's hungry through a nationwide network of food banks.  Each year, the Feeding America network provides food to more than 25 million low-income people facing hunger in the United States, including more than 9 million children and nearly 3 million seniors. Their network of more than 200 food banks serves all 50 states, the District of Columbia and Puerto Rico, and distributes more than 2.5 billion pounds of food and grocery products annually.

SALVATION ARMY - Santa Clause is the celebrity representing the Salvation Army’s Red Kettle Christmas Campaign.  The Salvation Army is committed to doing the most good with your donations.  Funds raised provide food, toys, and clothing to many of the 37 million people living in poverty during the Christmas season. A $100 contribution will feed a family of four for two days. It will also provide two cases of drinking water and a household clean-up kit containing brooms, mops, buckets, and cleaning supplies. So, the next time you hear that bell or see the kettle, don’t just walk by, throw in your spare change (or more) it all adds up.
Hunger doesn’t discriminate.  It can affect anyone—even those you’d least expect.

Don’t be a scrooge!  Santa is watching…….Research the above charities or find another. Hopefully this motivates you to give during the holiday season.  Merry Christmas and Happy Holidays from all of us at A Healthier World.