Where in health am I? : Home / Blogs and Commentaries / Celebrity Health / Andre Agassi - Just Methin’ Around

Crystal meth is one of the biggest threats facing us. The most interesting part of Andre Agassi's new autobiography 'Open' (besides the mullet wig) is clearly his ultimate victory over meth addiction

Andre Agassi is the latest in a long line of celebs trying to out do each other with their bombshell tell-all memoirs. In his new autobiography “Open” Agassi discusses experimenting with the drug crystal meth in 1997, the moment when he found out he failed a drug test and the lie he told to save himself from a minimum three month suspension. He also sheds light on other curious aspects of his life like; his outfits(crazy), hairstyles (a wig!)and failed relationships with women (Brooke Shields). 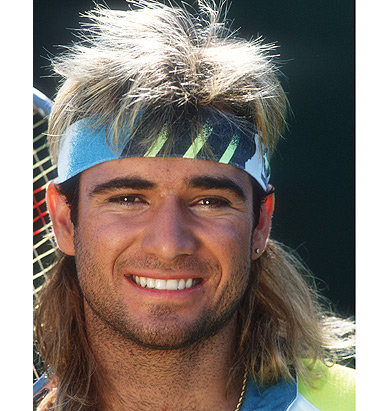 The most interesting part of the book (besides the mullet wig) is clearly the drug use, and he claims it all started on a normal afternoon at home watching TV. Agassi was hanging out with his assistant Slim when Slim says "Let's do some gack".

This led to Agassi snorting meth periodically over the next year or so. He explains the feeling he got when high, “I snort some. There is a moment of regret, followed by vast sadness then comes a tidal wave of euphoria that sweeps away every negative thought in my head. Apart from the buzz of getting high, I get an undeniable satisfaction from harming myself and shortening my career".

His self destructive euphoria didn't last long though as he recalls the moment he got the call that he’d failed a drug test and realizes the only way out of his predicament was to make Slim the scapegoat. "My name, my career, everything is now on the line. Whatever I've achieved, whatever I've worked for might soon mean nothing. Days later I sit in a hard-backed chair, a legal pad in my lap, and write a letter to the Association of Tennis Professionals (ATP). I say that recently I drank accidentally from one of Slim's spiked sodas, unwittingly ingesting his drugs. I ask for understanding and leniency and hastily sign it. It's filled with lies interwoven with bits of truth. I feel ashamed, of course. I promise myself that this lie is the end of it".

Clearly, that failed drug test and the lies that followed were his rock bottom and probably saved his life because crystal meth is one of the most addictive of all street drugs and quite possibly the most difficult to kick.  When asked if he felt he was an addict, Agassi says, "I can't speak to addiction, but a lot of people would say that if you're using anything as an escape, you have a problem”.  Perhaps he didn’t follow the classic addiction path, but he was teetering on the brink of something that can only be described as horrific to those that have.

Crystal meth is one of the biggest threats facing us: it’s readily available, highly addictive, and cheap.  As of 2008, more than 12 million Americans had tried methamphetamine and 1.5 million are regular users.  Sadly, 15,000 deaths per year are associated with meth and admissions to meth treatment facilities have outpaced cocaine and heroin placements for the past three years.  Meth use is also linked with the transmission of HIV and hepatitis B and C due to the sharing of needles, and also because a user’s judgment may be impaired and they may be more likely to engage in other risky behaviors like unprotected sex.

The short term effects of crystal meth are similar to those of cocaine but last longer and can cause erratic, violent behaviors. Many users have suppressed appetites, poor sleeping patterns, mood swings, tremors and convulsions, increased blood pressure, and an irregular heart rate. Users may also experience homicidal or suicidal thoughts, anxiety, and paranoia.

Long-term effects of crystal meth use can include brain damage, coma, stroke or death. Chronic users may also develop distinct physical symptoms such as severe weight loss, tooth decay, cracked teeth (Meth Mouth), hallucinations, sores on the body, and formication – the feeling of bugs crawling on your skin.  I’m sorry, but how does that sound appealing?????

Agassi had an amazing run before he started using meth; winning Wimbledon in 1992, followed by a gold medal at the 1996 Atlanta Olympics.  But, by late 1997, the year he started using meth, he’d dropped to No. 141 in the rankings - playing in tennis' equivalent of the minor leagues.  However, in 1998, he surprised everyone and came back strong, making the biggest one-year jump into the top 10 in the history of the ATP rankings. The following season, he won the French Open to complete a Grand Slam, and then added a second U.S. Open title, finishing 1999 at No. 1.

Agassi is lucky to walk away from meth as unscathed as he did and has worked hard to change his life:  he married the love of his life Steffi Graf, had a family, and started The Andre Agassi Foundation for Education which provides a quality education to underserved children in Las Vegas.  He retired from tennis as an eight-time Grand Slam winner and is considered to be one of the most successful and popular tennis players in history.

Quite a comeback for someone Just Methin’ Around.