Where in health am I? : Home / Blogs and Commentaries / Best Medicine / 5 Ways To Get Rid of Belly Fat Spam

Contradictory as it seems, malnutrition is a key contributor to obesity - Madeleine M. Kunin

Cancer, heart disease, diabetes? What is the leading health threat of our times?

The answer is rife with controversy, but judging by the ubiquitous number of TV infomercials, computer pop-ups, and magazine covers crying out from supermart checkout counters, you would think the number one health villain menacing the world today is belly fat.

Seriously, it’s impossible to escape the myriad warnings regarding this global crisis. They are everywhere. They scream at you from newscasts, online blogs, radio call-in shows, and spam emails. Everyone, it seems, is deeply concerned about your midriff bulge and what you can do to get rid of it.

Now I consider myself one of the world’s foremost authorities on belly fat. If you liken waistline blubber to the front porch of a house, you could say that lately I have been sporting a wraparound veranda that would not look out of place on an antebellum plantation mansion deep in the heart of Dixie. I wouldn’t be exaggerating too much if I admitted that you would have to do some hydraulic fracking if you wanted to find my navel in order to mine for some lint.

If I fell overboard and was splashing around in the water, I would probably not have a life ring thrown to me because I look like I already have one around my middle. It’s getting so bad, that I’m sure I have accumulated enough body mass to now be exerting a measurable gravitational pull. I’ve noticed that there are particularly high tides when the sun, the moon, and I are all arranged in a straight line.

But this isn’t just about me. Why is there all this commotion about belly fat? What about the other parts of the anatomy that are equally besmirched by layers of flab? What about the thighs, hips, and buttocks?

Apparently, belly fat (also called “visceral fat”) is worse for you than other kinds of fat. Whereas other forms of the unwanted substance just sit around and … well … chew the fat, midsection fat causes several serious health problems. According to the Harvard School of Medicine, belly fat produces hormones that increase your risk of type 2 diabetes as well as decreasing your lung function because there is less room for your lungs to expand.

To make matters worse, visceral fat has also been associated with heart disease because it secretes cytokine proteins into the cardiac area of the body which encourage low-level inflammation and resistance to insulin. In addition, belly fat has been linked to breast cancer in women because it produces the estrogen hormone which has been shown to feed carcinogenic cells and encourage their growth.

There are several avenues available to fight belly fat. You can hit your local gym or fitness centre and begin a comprehensive regimen of aerobic exercise and weight training to help burn off the calories that would otherwise accumulate around your midsection.

All this exertion may sound too strenuous to fit in with your sedentary lifestyle. Like me, your idea of aerobics might be how many trips you make back and forth to the fridge. Lifting weights might entail nothing more than picking up the remote to change channels and then putting it back down. If this is the case, you might want to go the way of diet pills.

There are literally hundreds of different pills out there which promise to get rid of that layer of blubber surrounding your waistline. These range all the way from hard-core anti-obesity drugs like Phentermine (sold under the brand names of Adipex and Fastin, to name just a couple) to herbal extract pills of which Garcinia Cambogia is one of the leading contenders.

Phentermine is an appetite suppressant that acts similarly to amphetamines to get the hypothalamus part of the brain to stimulate the adrenal glands. As a result, the neurotransmitter norepinephrine is released which in turn brings on the “fight or flight” reaction. In other words, you become too busy running for your life to eat that second cheese and bacon double papa burger.

The alternative herbal extract, Garcinia Cambogia, is actually derived from the rind of the edible pod fruit of the tamarind tree grown in Indonesia. When taken orally, it blocks glucose from entering the bloodstream, while at the same time it helps burn fat in the liver (which is somewhere in the vicinity of your belly). You might also be interested in knowing that one of the other uses for tamarind is as a metal polish.

Whatever you do, do not read the list of side effects, counter effects, and drug interactions for belly fat reduction pills. The list includes symptoms ranging from nausea, headaches, and intestinal discomfort all the way to inducing psychotic behaviour serious enough to have you locked up and isolated so that the only thing left do is to sit quietly and stare at where your belly fat used to be.

If you eschew drugs and pills, you may want to go the route of laser therapy. CoolSculpting is one such technique that literally destroys fat cells through cryolipolysis (cooling the cells to near freezing where they crystallise and shatter). Unfortunately, the treatment sessions are quite costly and just a small quantity of fat can be removed in any one session. It would probably be cheaper for you to replace your body limb by limb and organ by organ than to CoolSculpt away the unwanted belly fat.

This brings us to diet. Every direction you turn these days you are bound to see “The 5 Worst Foods for Belly Fat” or “5 Foods You Should Never Eat” banners in newspapers, magazines, and on the worldwide web. The problem is that nobody can seem to agree what these 5 foods are.

One diet warns against: sugar, margarine, soy protein isolate (whatever that is), diet foods, and frozen meals (chockfull of fat and salt). Another healthy eating plan advises to stay away from: white bread, fried foods, cream based salad dressing, white rice, and high fructose corn syrup.

The list grows and grows as you intensify your research. One by one, the number of allowable foods is dwindling. How long will it be before “The 5 Absolute Worst Foods You Should Never Never Eat” will consist of all of the five major food groups: fruit, grain, meat (including fish, poultry and eggs), dairy, and vegetables? If you get hungry, you can always suck on a stone.

Nobody asked me, but from my own experience, I realize what my particular 5 personal dietary demons are: cinnamon buns, donuts, danishes, apple fritters, and cheesecake. As far as I’m concerned, it’s open season on everything else (except maybe that soy protein isolate).

Shilo Zylbergold lives on a small island somewhere in the southwest corner of British Columbia, Canada. He grows vegetables, teaches math, and is a columnist for a local paper. Send complaints to [email protected] 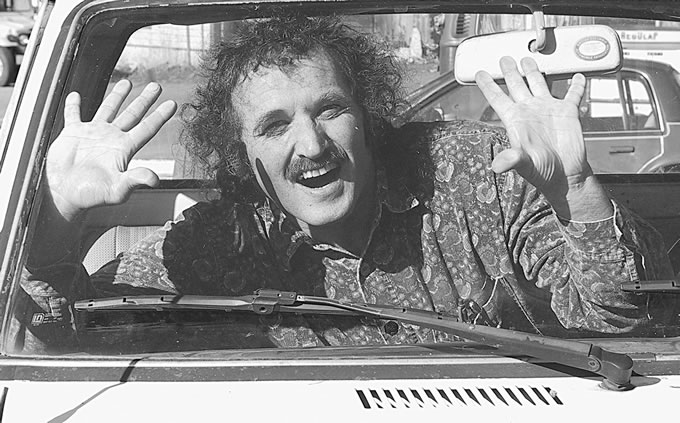 The Latest from Best Medicine

Nobody Asked Me But: Probing The Ageless Male Syndrome

Nobody Asked Me But: Probing The Ageless Male Syndrome